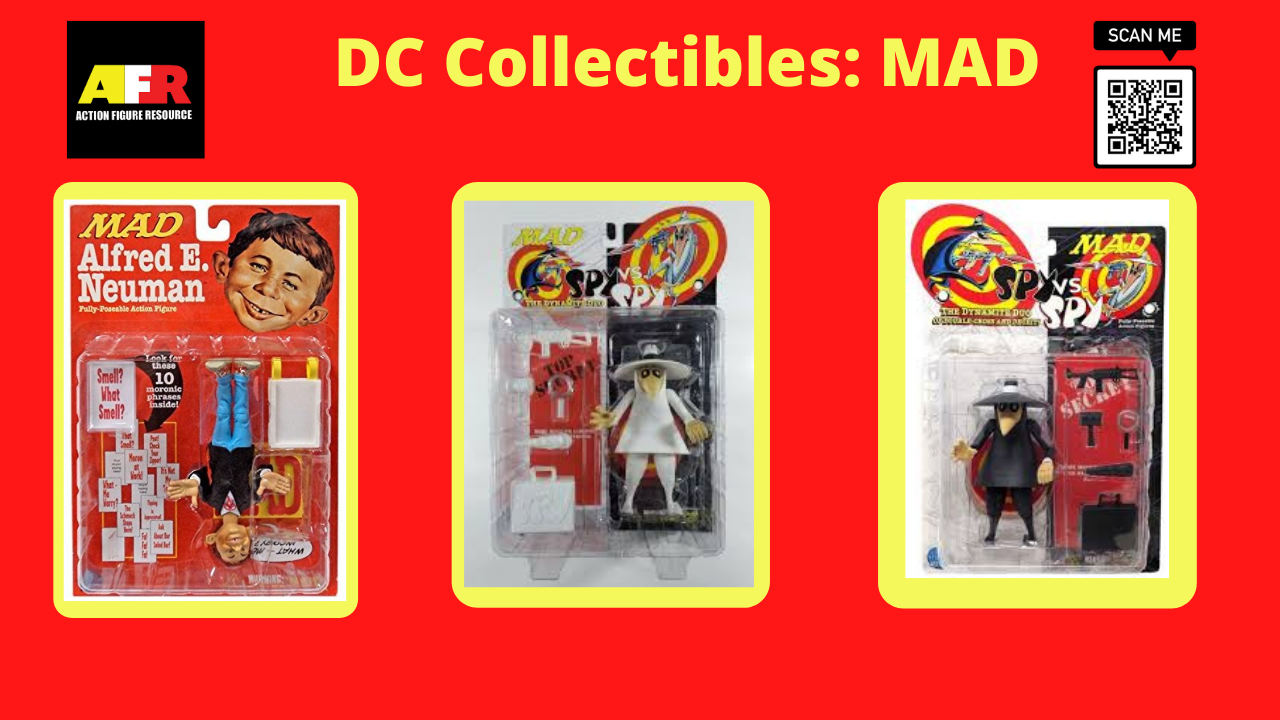 DC Direct launched an action figure line that was based on the American Magazine Mad, in 1998. Mad or MAD is an American Humor magazine founded in 1952 by Harvey Kurtzman and William Gaines. The magazine started as a comic book before it grew to become a favorite among the audiences. It covers various topics that are usually satirical, comedic, or political.

Its characters, like the iconic Alfred E. Neuman, Black Spy, and White Spy, soon had lots of following. I guess it felt like a great idea for DC Direct to turn these characters into unforgettable action figures. 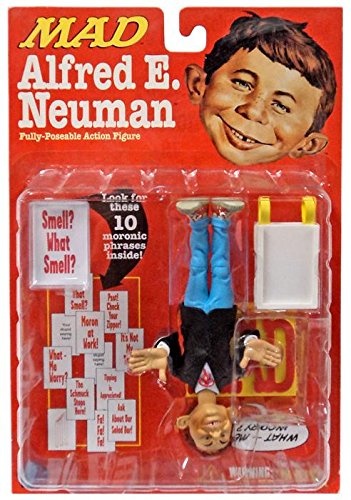 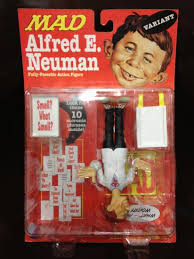 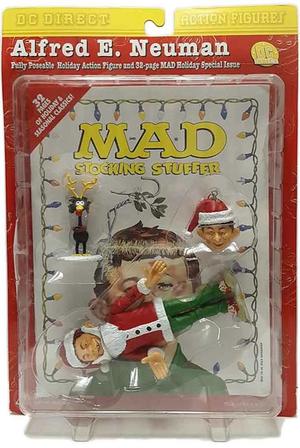 Alfred E. Neuman is the main figure and poster boy of Mad Magazine. He has an outstanding face that is easily recognizable with his groomed red hair, dazed-looking eyes, a smile that reveals a gap tooth, large ears, freckles, a protruding nose, and a slim scrawny body. He got his name from Mad's second editor, Al Feldstein. He has appeared with a smiling look on the cover of Mad magazine very often over the years. Neuman is also famous for his interesting quotes. In the magazine, he is a very curious and mischievous boy always finding himself in comic situations. 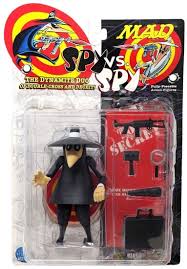 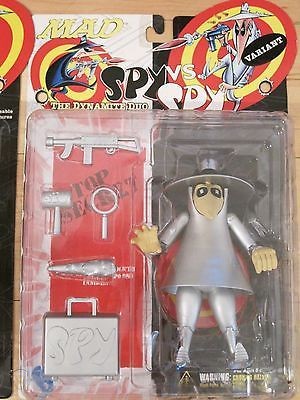 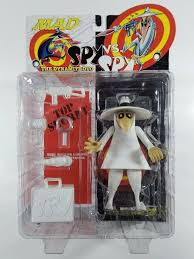 The Black Spy and the White Spy are characters from a wordless comic strip, Spy vs. Spy, published by Mad Magazine. Both of them are spies that are always on some sort of espionage mission, and they are always at each other's throats. The Black & White spies are identical with long, beaklike heads, white pupils, and black sclera. The only difference is in their attire. Armed with an arsenal of booby traps and other tools, the spies go against each other, sometimes one of them winning, with the other losing out, or they both win or lose. The interesting thing that captured the hearts of so many people is the Spy factor. Everyone loves a good Spy with some tricks up his sleeve. Over more than ten years, the Spy vs. Spy comic has been published continuously, following the two diabolic spies' unending showdown.

We will be reviewing the action figures based on the magazine series first released in 1998 by DC Direct, and you will see what makes these toys a great collector's choice. There were not so many action figures released under this line, but it was the first series by DC Direct. Some of the action figures have variants, but all used generic backing cards and had very few differences. All of these figures stood at less than 7 inches, and they all had fantastic articulation. DC Direct followed their success with the series by releasing so many other fun series over the years that have also been loved by kids, adults with fun childhoods, and action figure enthusiasts. 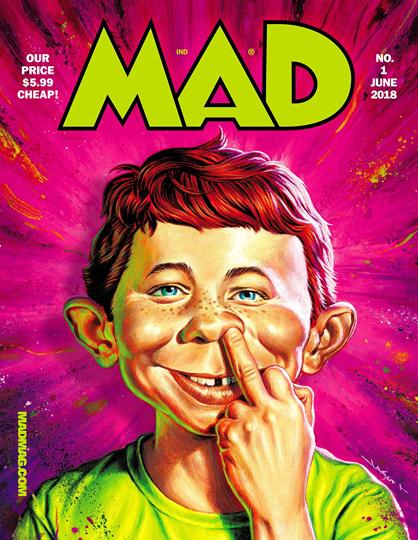 The Alfred E. Neuman toy came in a blister pack with  the Mad magazine logo eas written in the magazine's trademark italicized yellow fonts on the top left corner. The DC Direct logo could be seen in blue on the bottom left corner. To the right of the logo, there was an image of Neuman's head. The blister pack contained an upside down Alfred action figure. Included in the packaging is a sandwich board that can be fitted over his head, with ten signature Neuman phrases that could be put on to the sandwich board.

Behind the figure, MAD is written in red fonts with a yellow background, and a speech bubble with Neuman's popular phrase, "WHAT- ME WORRY?". Also the back of the packaging had a dart board the could be cut out.

In terms of sculpting and build, there is a lot of detail on this action figure. His face looks exactly like the character from the magazine with his brown hair, gap tooth, protruding nose, and big ears.

He was dressed in a black jacket, a red bowtie, blue trousers, and red shoes. You can also notice the detailing, down to the figure's shoelaces. DC also did fantastic job of the paintwork.

As an action feature, the Alfred E. Neuman has a 360 Neuman Vision, which makes the figure turn its head automatically. The feature can be activated by winding up the figure's head and then pushing a button behind the figure to get the head spinning.

On the packaging card's backside, a customized Neuman target image takes up most of the space. The top left corner also has the MAD logo in yellow, and beneath the logo is an instruction on how to use the toy's action feature. To the right, Alfred E. Neuman's name is written in white fonts, and there's an image of the character with the signboard over his shoulders and some tips. The backing card also displays adverts for Spy vs. Spy toys available in the line. The bottom right corner displays the DC Direct logo in blue.

I think the most peculiar thing about this figure's packaging is Alfred E. Neuman's upside-down positioning. As well as this version there was also a White Jacket and a Santa Outfit version of Alfred available. The White Jacket version was exactly the same as the blue jacket version but was short packed, and the Santa Outfit version came with a free 32 page MAD Christmas Special magazine. 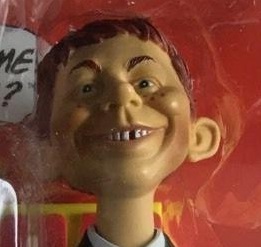 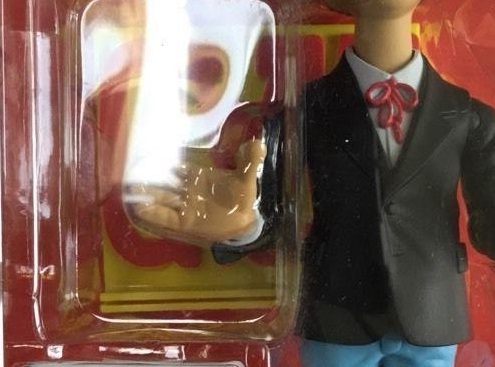 There were caricature images of the Black Spy and White Spy firing weapons at each other at the top of the front of the blister package, with a wicked smile on their faces. The MAD logo was on the top right side, in yellow fonts. The title of the original comic strip, Spy vs. Spy, is written in black and white font to show the duality of the spies.

On the backing card, the Spy vs. Spy logo can be seen on the top left part, and to the right, there is a visual guide on how to use the action figure, as well as a small advert for the Alfred E. Neuman figure.

The majority of the center part displays a sneak peek of the Spy's secret weapons and gadgets included in the package. There is also a blue DC Direct logo at the bottom of the card. You can notice fake bullet holes on the card.

The figure comes standing in the pack with a yellow and red circular target behind it. The paint job on these was simple but perfect for the figure. There was a button on Alfred's back that activated the action feature, which was a bomb-throwing movement. To activate this, the right-hand needed to be pulled back and locked in place with a bomb in his hand, and then you press the button behind the figure would throw the bomb.

There wasn’t much detailing on these figures as they were pretty basic characters, but they were great replicas of the MAD comic characters.

They were fully-posable, but one of the hands was in a permanent position for the action feature. Despite his slim legs and pointy shoes, he could still stand on his own.

Their accessories were a magnifying glass, a machine gun, binoculars, a bomb, a saw, a dagger, a club, a briefcase, and a mallet. All of these accessories were in either black or white and you will notice "Spy" written on some of them.

There was also a variant “Silver” variant, or chase version. 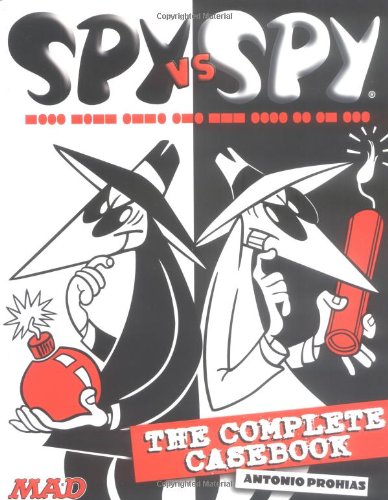 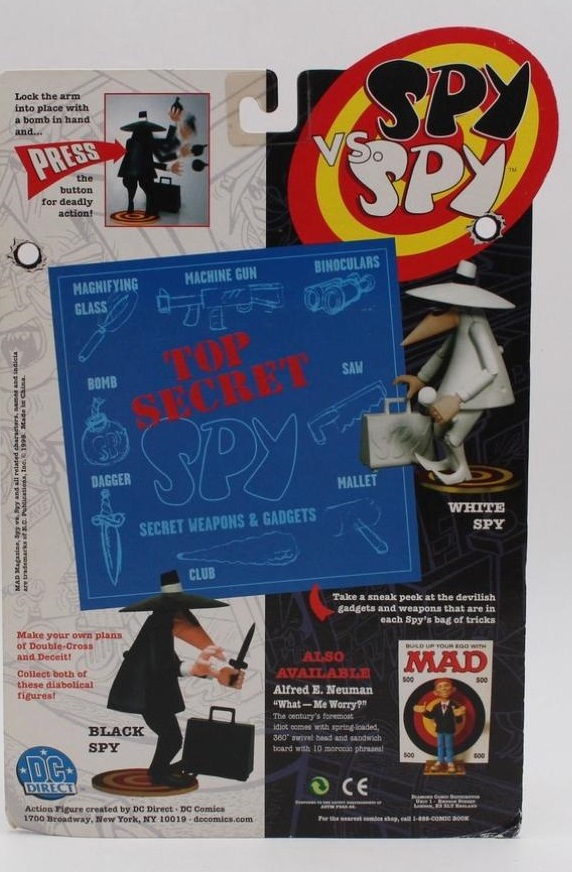 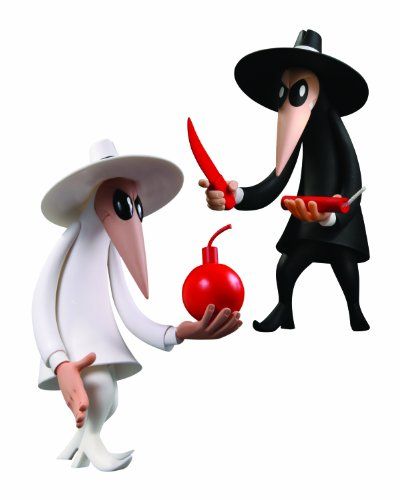 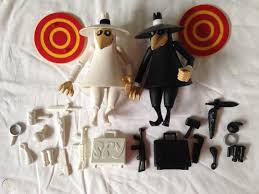