The Kenner Star Wars A New Hope Luke Skywalker action figure, also known affectionately as Farmboy Luke by fans, was first released in 1978 as part of Kenner’s Early Bird Certificate Package, and later on the 12-back cards.

There are few action figures  that have been produced in the 60+ years since the first GI Joe was released in 1964 that are as iconic as the Farm Boy Luke figure.

This figure was based upon the humdrum, adolescent, moisture farmer being raised by his aunt and uncle on the desert planet Tatooine. 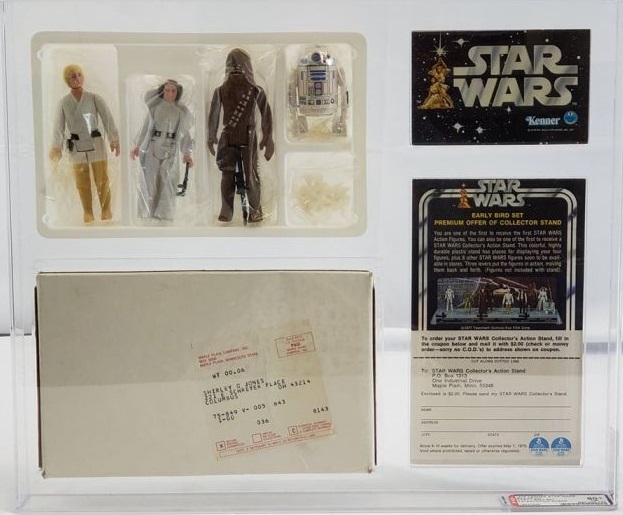 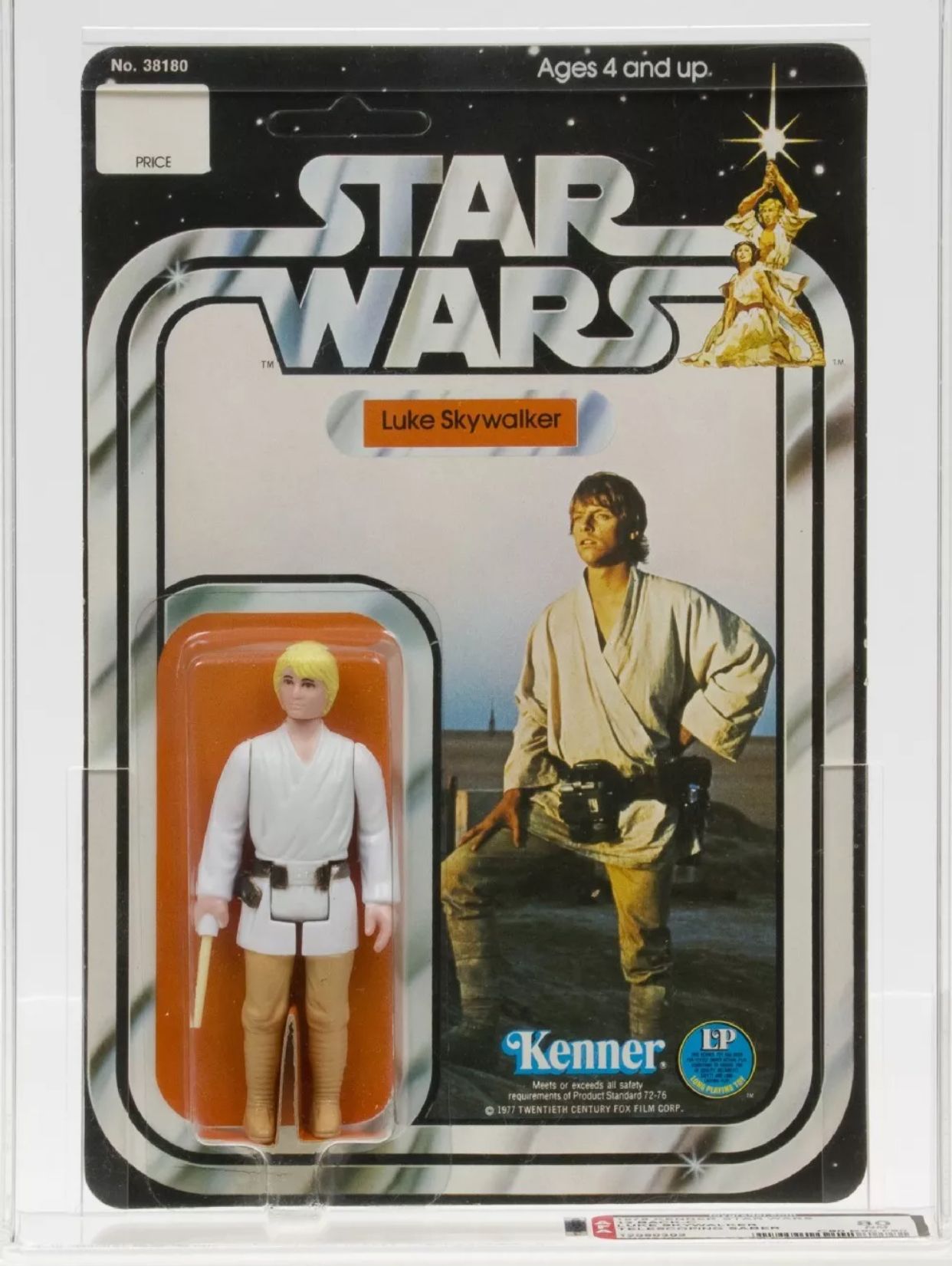 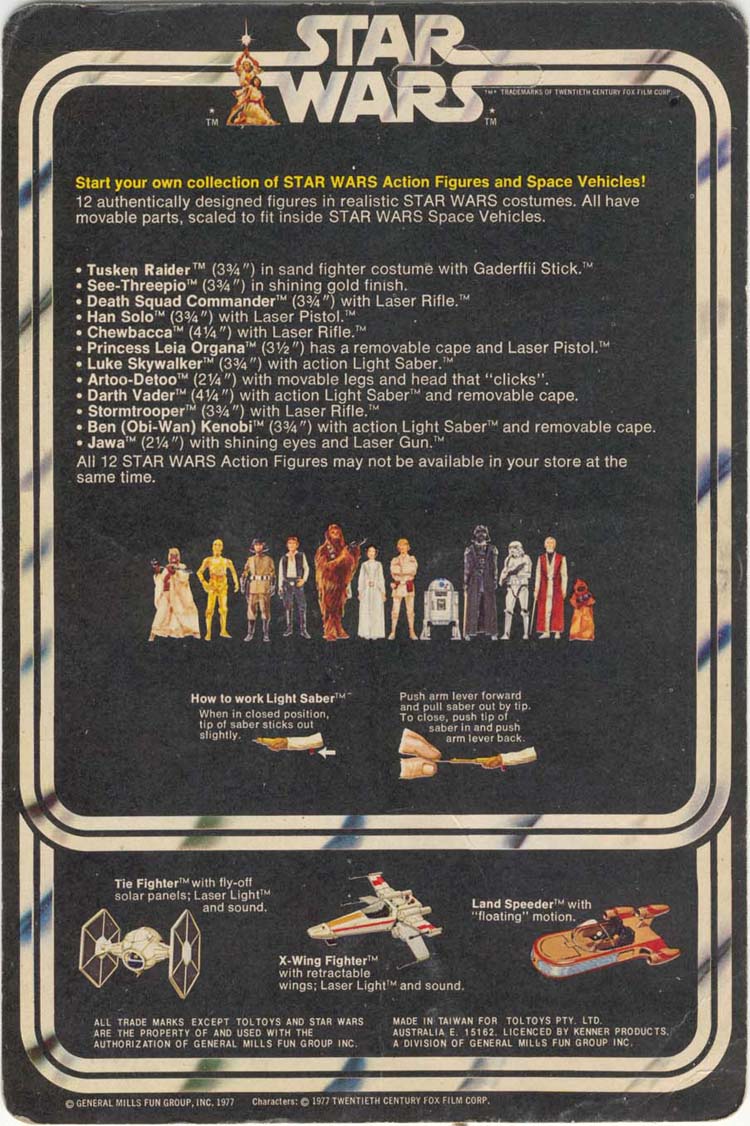 He was portrayed in his sandproof leg bindings (which are often mistaken as boots) with gripping soles, a Tatooine farm tunic, light pants and a brown utility belt with a molded “droid caller” and a tool pouch hooked onto to his right-side.

Farmboy Luke, as with most of Kenner’s Star Wars figures, had five points of articulation on the head, arms and legs. The figure itself only had a very loose resemblance to Mark Hamill, who played Luke. The figures biggest selling point was his sliding telescopic lightsaber.

Some of the earliest released Luke Skywalker figures had a “double-telescoping” lightsaber which came in both the Early Bird Certificate Package and on 12-back cards.

Farmboy Luke Figures with these “double-telescoping” sabers have become extremely rare and expensive to find, especially mint on the card. There is also what is known as the circle variant double telescoping saber which is even rarer and has two small indented circles on the handle. These lightsabers are very easy to reproduce so it’s important to be careful when buying them and insuring your lightsaber is authentic. One of the best resources to check the authenticity is the Imperial Gunnery website (see the link below). 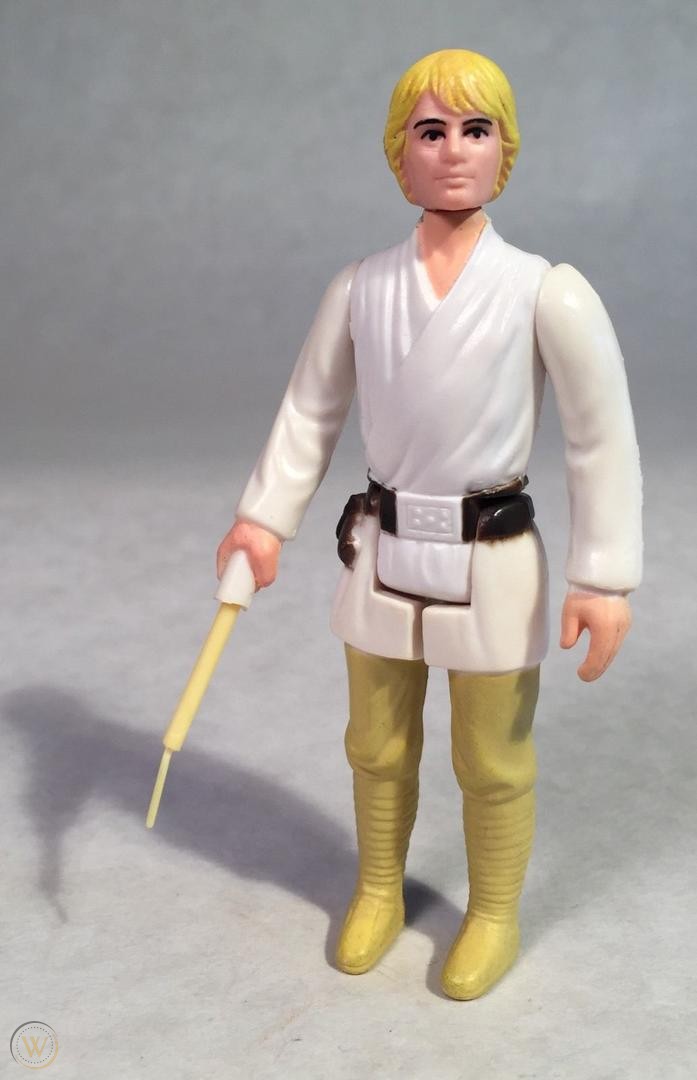 There are several variants of the Farm Boy Luke figure, the first, as already mentioned is the telescoping lightsaber, but there were also many different variations on his hair color and pants. Known variations of his hair are blond, light brown, dark brown and orange. The yellow hair variant is the most common of these, the brown- and blond-haired Luke’s came on the Empire Strikes Back cards only. 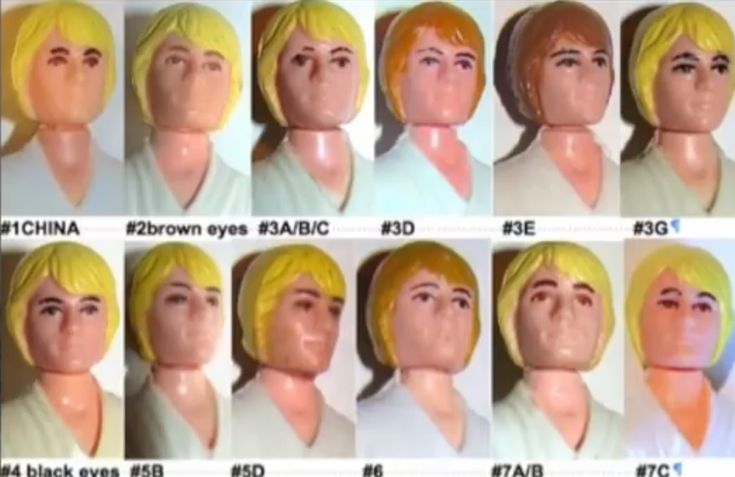 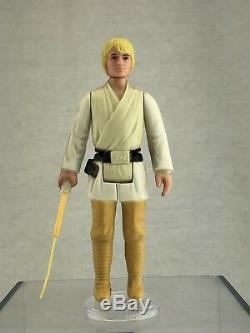 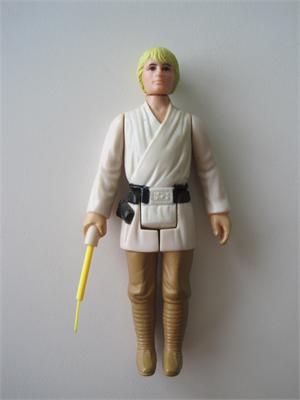 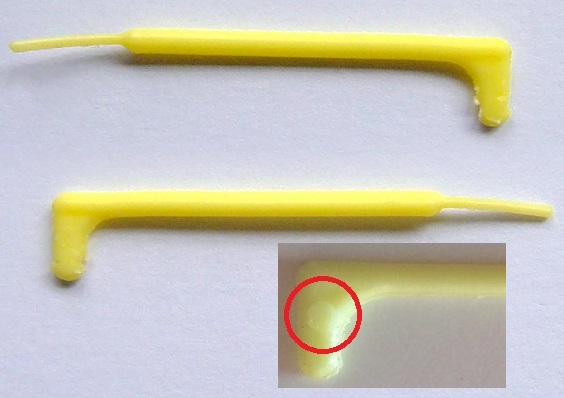 The Taiwan COO Farmboy Luke figure has a variant head sculpt with an elongated chin which actually seems a lot more common than the earlier non-elongated chin sculpt produced in Hong Kong on the 12-back cards, and are relatively hard to find.

As well as these variations he also came with, or without a bar in the slot on his arm.

The Luke Skywalker figure was about a head shorter than the others, probably in order to show that he was a lot younger than most of the other characters. 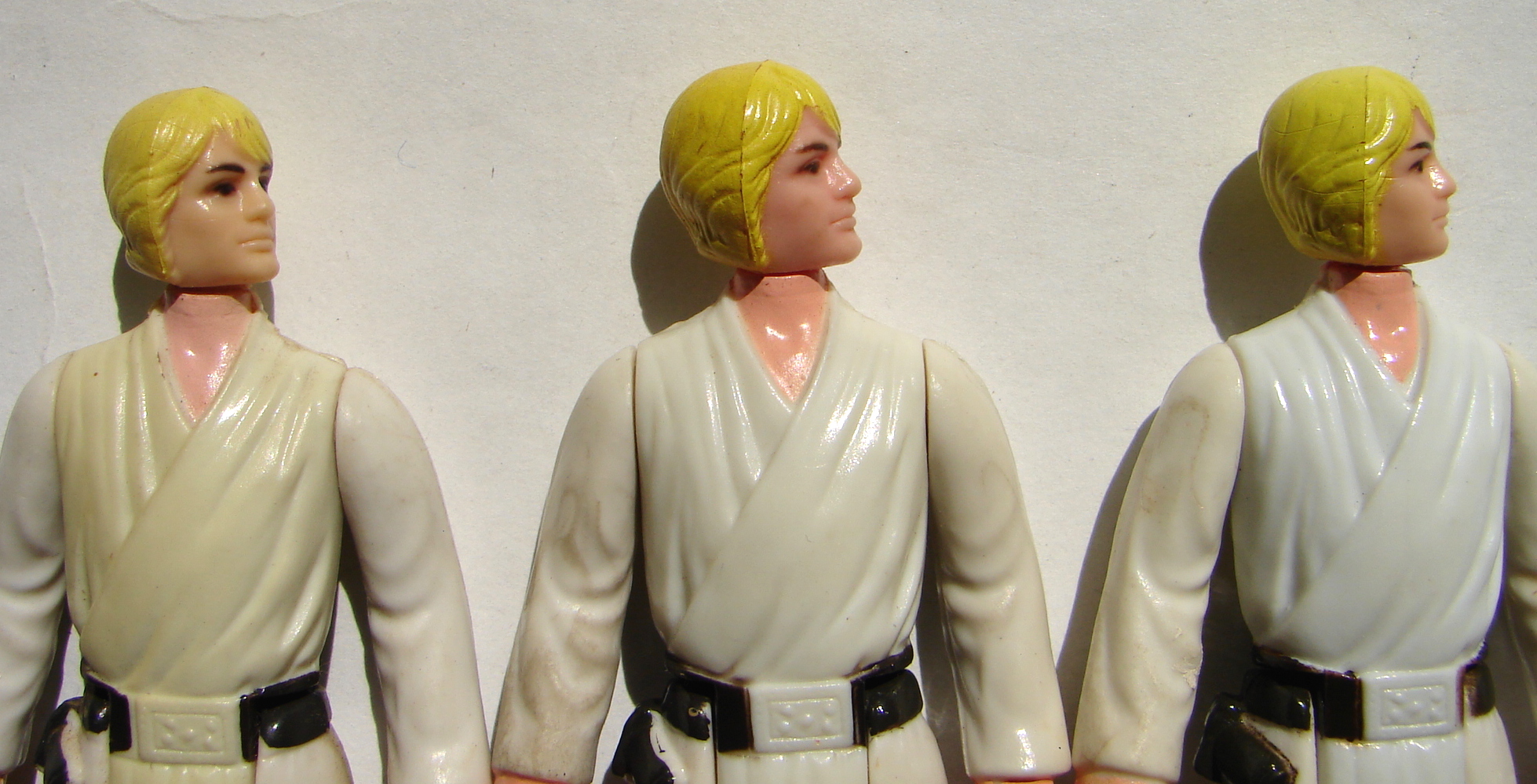 Both the painting and sculpting on this figure were pretty mediocre, may be because Kenner were caught with their trousers down by the unexpected demand for these figures causing them to rush production. Whatever the reason, kids seemed to be oblivious to it as they queued up outside stores to get their hands on them.

To be fair, his outfit itself looked pretty accurate and decently sculpted but the paintwork was quite sloppy with a fair amount of overlapping and smudging.

The Farm Boy Luke was released on both the 12-back and 20/21-back cards in the A New Hope line as well as on TESB and ROTJ cards. 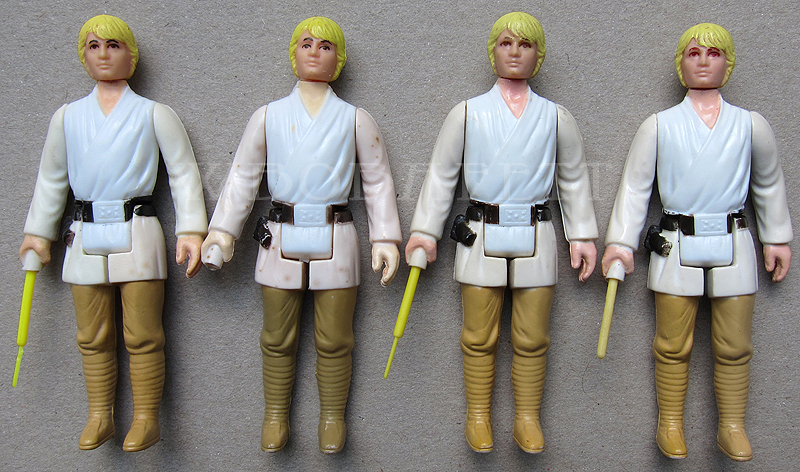 For more information on all the variations of backing cards see my dedicated video on this topic.