Gambello Anthony - code name Flash, was a member of the original G.I JOE team. He was a Laser Rifle Trooper, as well as being their electronics and CBR (Chemical, Biological and Radiological) expert.

Although he wasn’t one of the main characters and he only made background appearances in the series, he was still a lot of people’s favorite G.I JOE, perhaps because he was a genius, and he had a very strong belief in the American system. 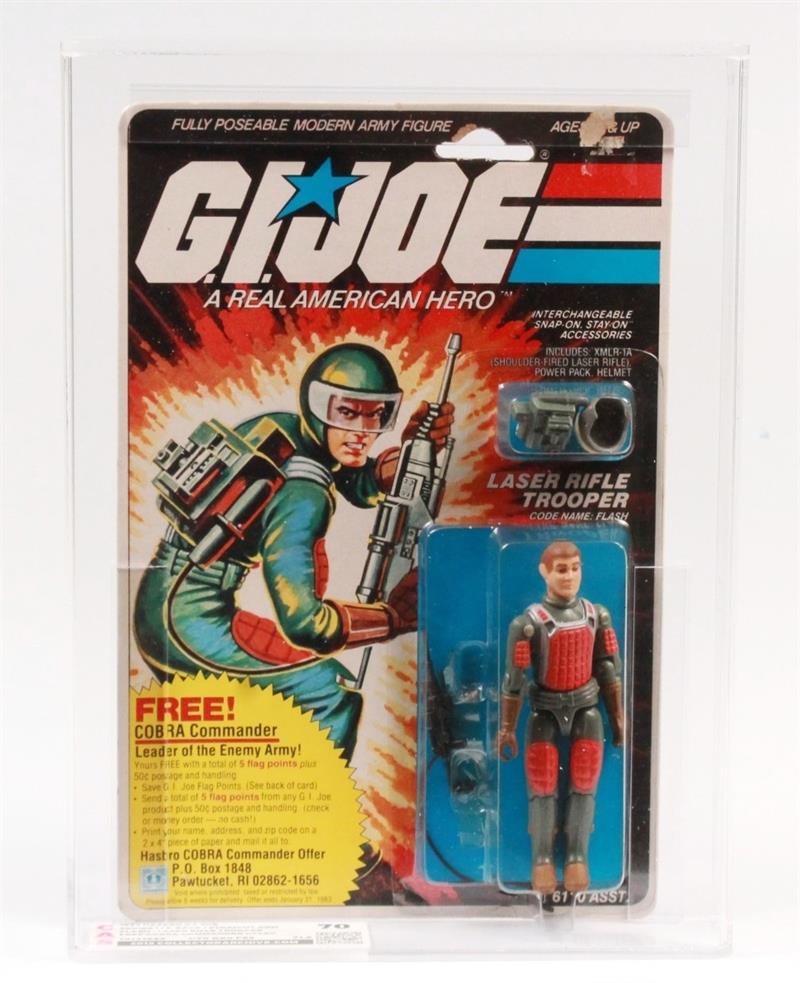 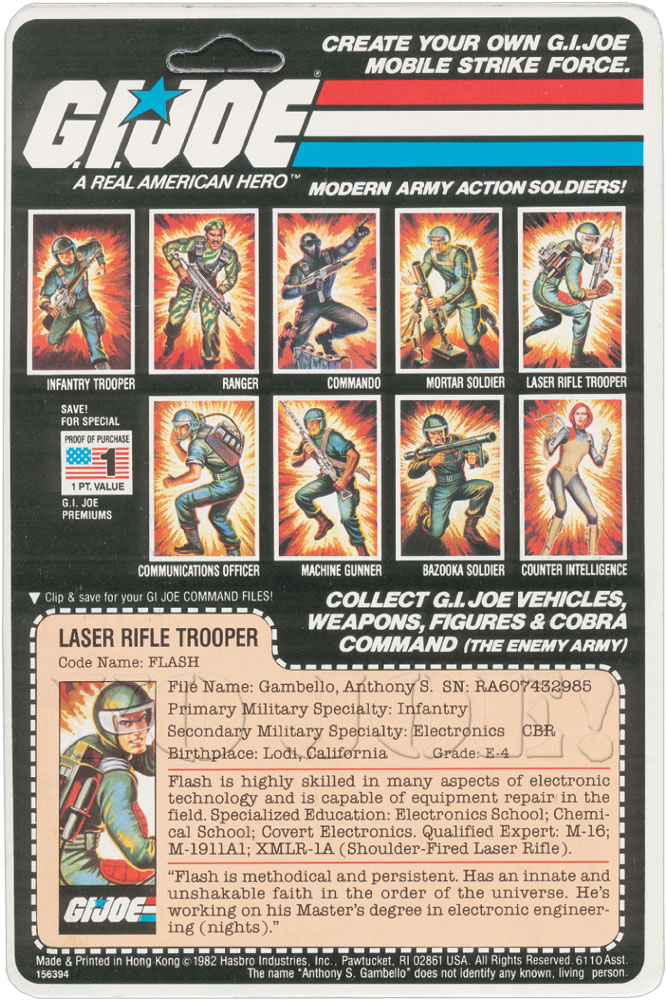 He was first introduced as part of the original wave of 16 figures released in series 1 in 1982, and he ran till 1994, while his first cartoon appearance wasn’t until 1983. Flash’s weapon was a XMLR-1A Laser Rifle, where the “XM” stands for “ex-perimental model”, meaning the weapon was initially adopted for the US Military.

Although the 3.75 inches action figure was the only one based on Flash in the initial vintage run, the brilliantly painted padded uniform and excellent accessories made sure that the figure generated a lot of sales during his short run. 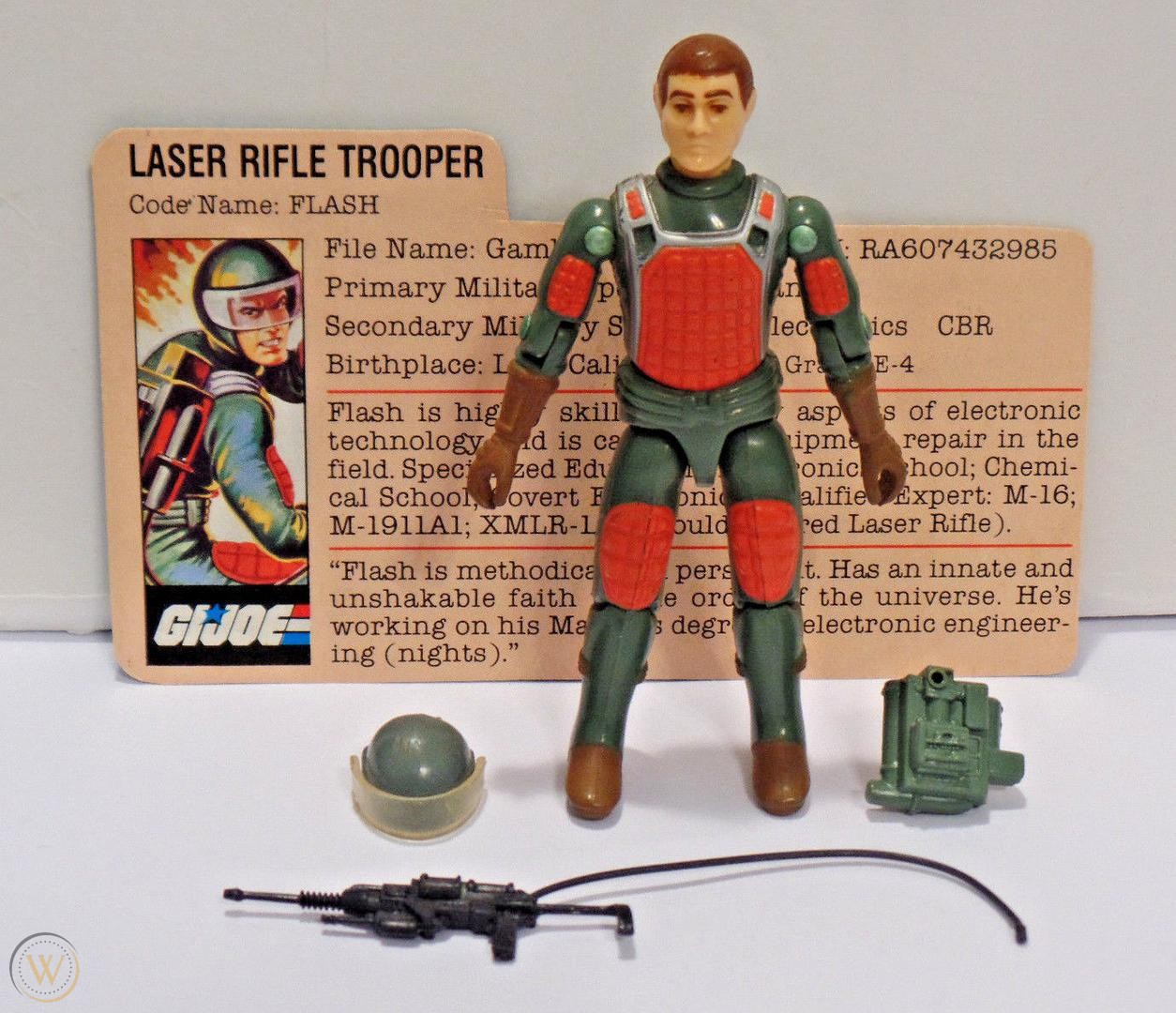 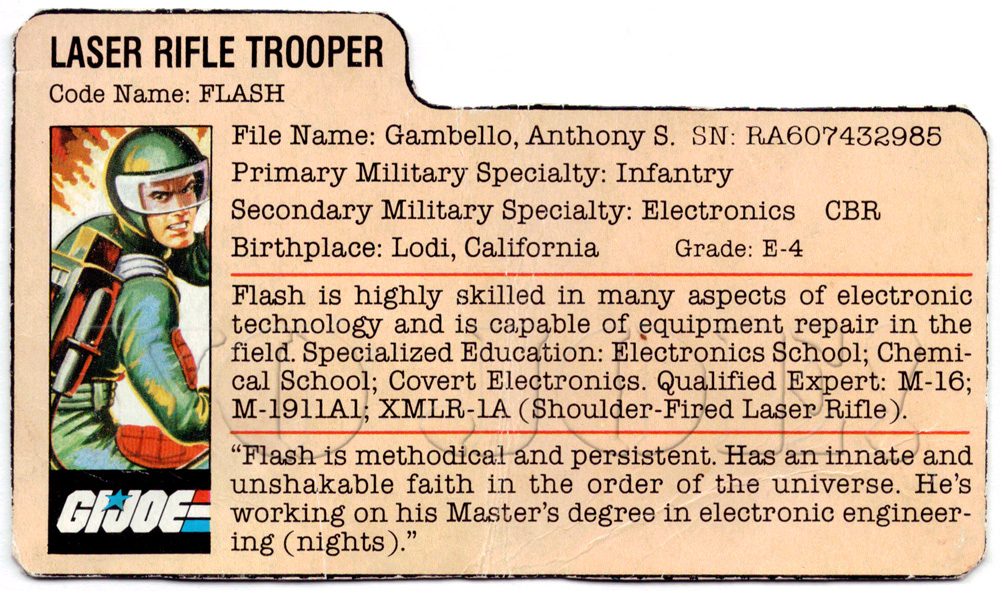 The series one figures came out on 9 back cards that showcased the other G.I JOEs arranged in rows and columns on a black background, directly under the G.I JOE logo and the file -card taking up the bottom third of the card which gave some brief details about him.

The front of the card had a big G.I JOE logo at the top while the action figure itself was located on the bottom right part, in front of a blue background. His laser rifle was directly beside him to the left and the three other accessories were directly above his head. 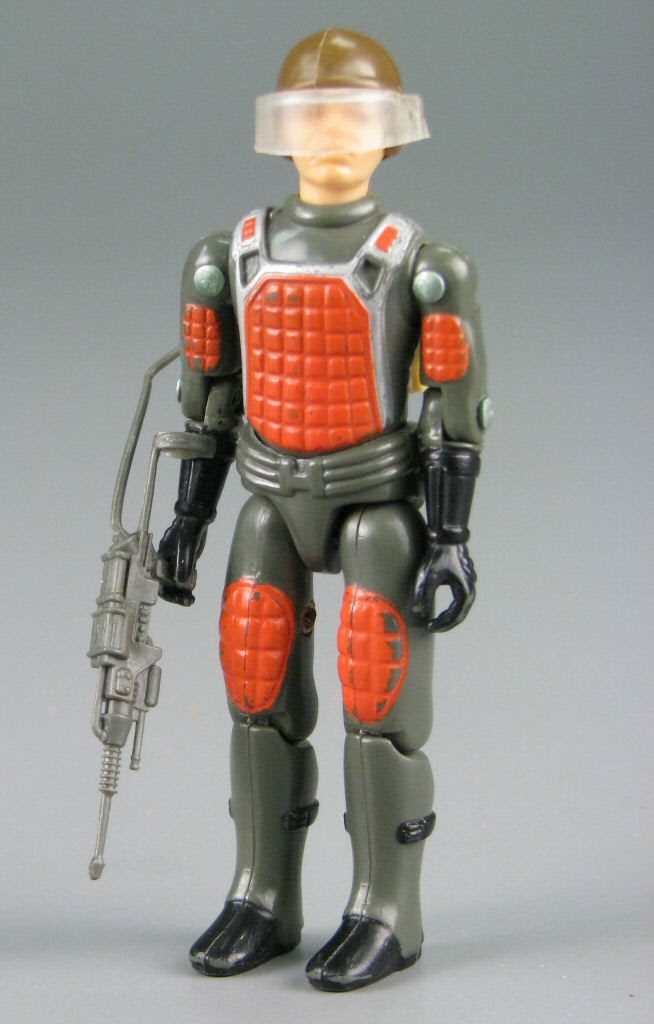 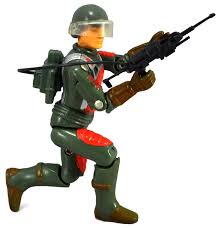 The sculpting of this figure was not bad at all and indeed, he looked the part of a real soldier. However, there did seem to be a flaw on his face, as his lips were a little bit too far from his jaw.

Other than this, everything else was quite accurate.

He was sculpted with his entire body covered in a suit of armor, except for his face, and he had long leather gloves or gauntlets on his hands. His arms were well proportioned and perfectly sculpted. His armor or the rough protective pads which he wore on his chest, upper arms and upper legs were also sculpted well. His head sculpt on the other hand was fairly plain but could only be seen when his helmet and visor were removed.

The Flash figure had four accessories: an XMLR-1A laser rifle, a backpack, a helmet, and a visor, which was usually attached to the helmet but could be taken off.

Although the figure only had the few standard basic points of articulation, as with all other early releases, it was still a fun figure to own.

The upper body could be twisted at the waist. His neck had a swivel joint which allowed him to turn his head to the left and right. 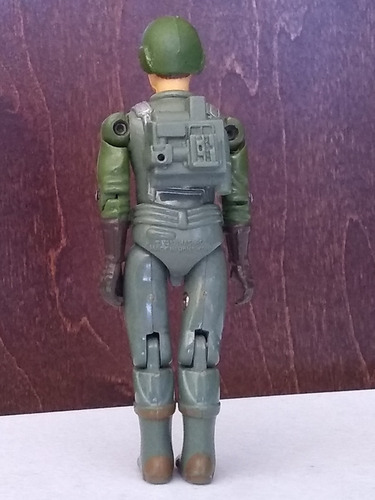 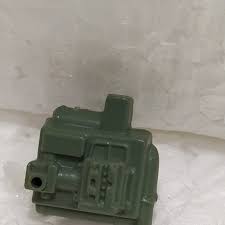 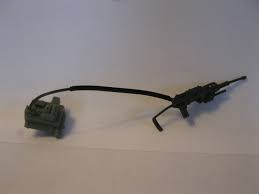 The shoulder had ball and sockets that could be moved up and down and rotated and lastly, the elbow could be bent up at 90 degrees

Flash’s 1982 figure was a straight arm, meaning he could only move his whole arm from the shoulder, in an up and down and rotational direction. However, an upgraded variant was released the following year, which had swivel joints just above the elbow, to permit rotation of the forearms.

The 1983 release also had a slimmer waist-piece replacing his bulky original waist-piece and the date stamp on the figure was changed from "1982" to "82-83." As well as these variations the pegs on the backpacks were different. The pegs on the 83 version were slightly larger so the backpack pegs from the original figures only fitted loosely into the ’83 version figure. 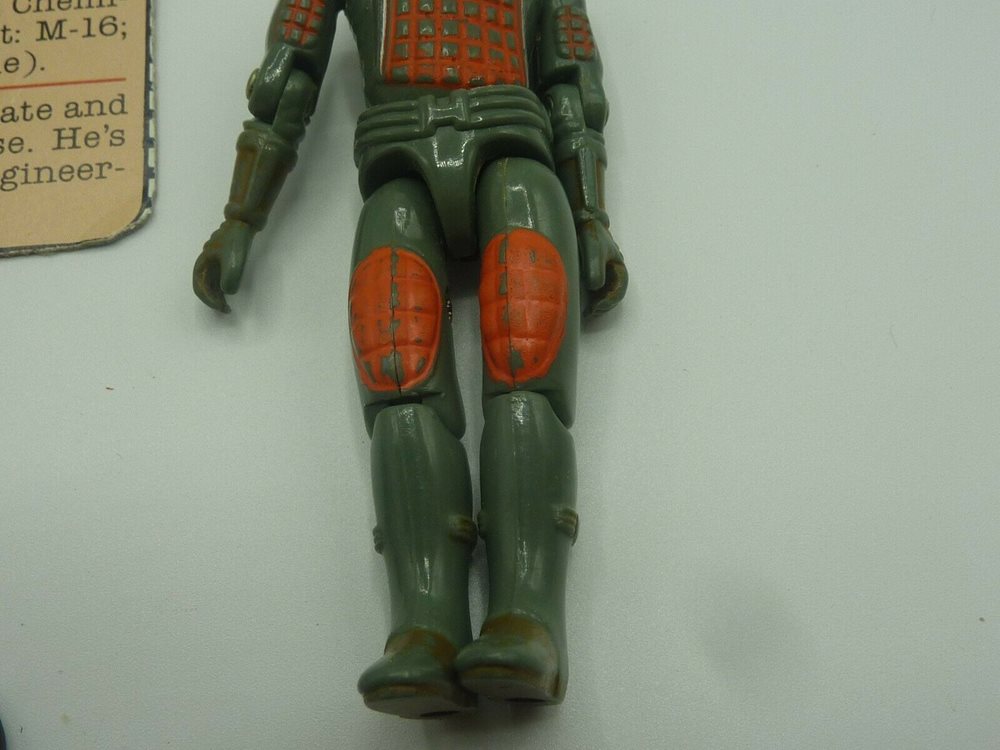 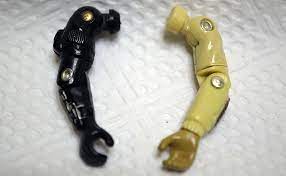 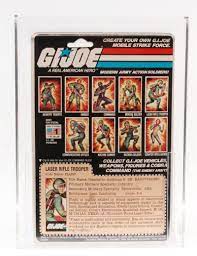 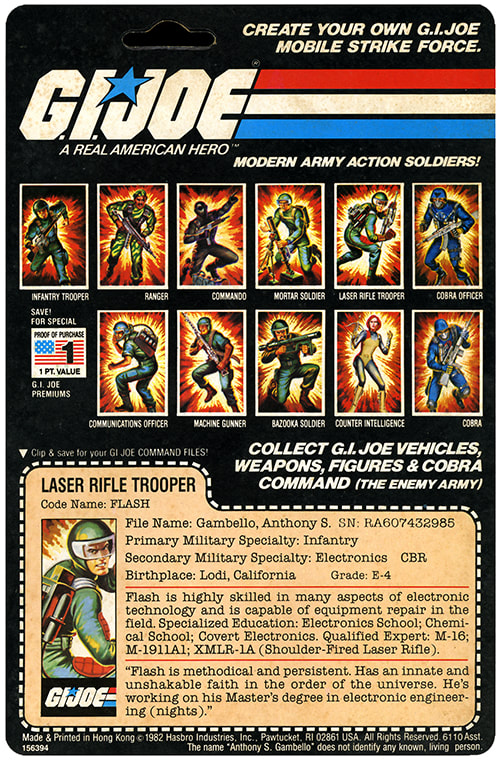 Later the fourth series of the figure had the ball-jointed neck replaced with a swivel neck and generally had a better poseability.

There were also two variations. Figures sent through Hasbro directly and sold through Sears and JC Penny’s had a glossy red backing whereas the regular carded figures did not. 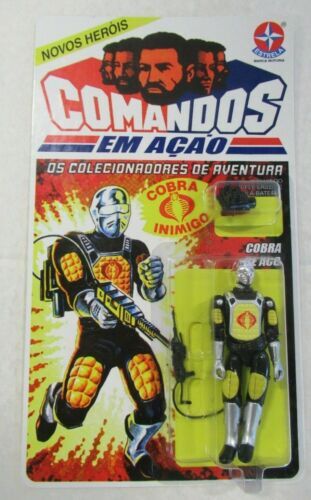 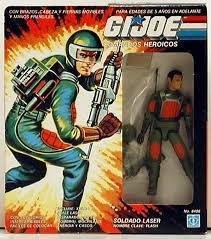 ·         An identical version of Flash was released as Flash in Argentina and as Elétron in Brazil.