Disney released three series' of Indiana Jones Figures and play sets that were exclusively available through their theme parks which opened in California in 1995 and Tokyo in 2001.

The first line of the exclusive Disney Indiana Jones figures was released in January 2001.  This lien consisted of one 4.5 inch action figure,  three micro action vehicles and a micro action play set,

The 4.5 action figure had the same backing card as all other carded toys in this series, except for the character info sticker on the blister and had five points of articulation on the  neck, 2 shoulders, and 2 hips. The only accessories  were a revolver, whip, sword, and a torch. 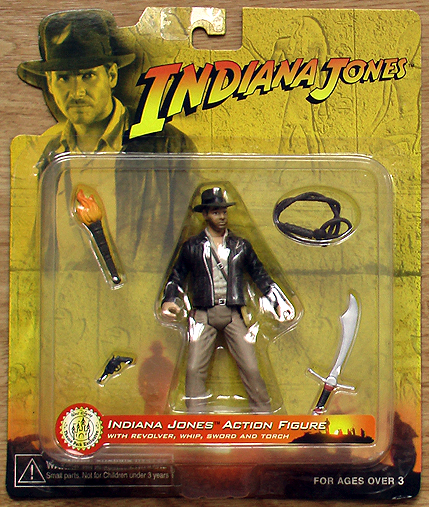 The first of these was a Micro Airplane of the legendary Flying Wing featured in Raiders of the Lost Ark and came with 3 sets of wheels, and 2 propellers.

The next vehicle in this set was a Micro Action Tank from the Last Crusade movie. The tank had wheels, 2 guns at the side, and one 360° movable gun on the top.

Probably the best and coolest of these was the Micro Action Motorcycle. This also came with figures that were made to the same scale as the other Micro vehicles and it had a sidecar to attach.

It also came with:

• Indy figure to place on the motorcycle 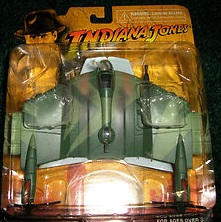 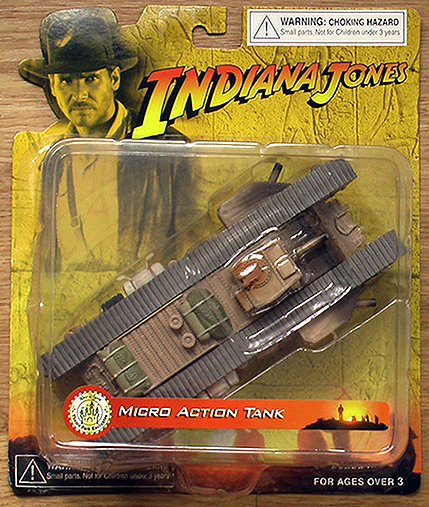 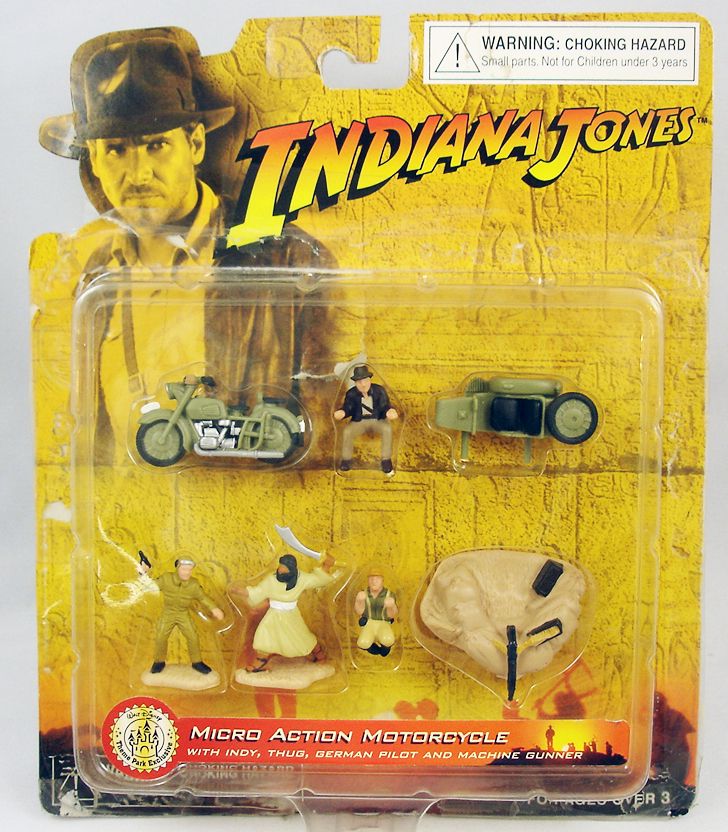 This was a 6 figure set made to the same scale as the Micro Action Tank, Airplane and Motorcycle and come in a fun little box. The 6 figures included in this set were: 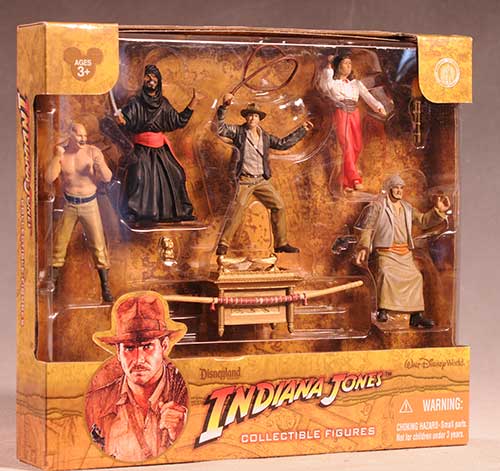 In the 2003 Series Disney released five 4.5 inch Indiana Jones figures based on characters from the Raiders of the Lost Ark movie.The card front for this series was identical to the first series but the card back was updated with the new figures featured.

Indiana Jones: this figure had 5 points of articulation on the neck, shoulders, and hips and came with a sand bag, machete, his satchel, a gold idol, and an idol stand.

Marion Ravenwood: 5 points of articulation and came with a frying pan and a piece of Monkey. Unfortunately this figure was very poorly sculpted and bore no real resemblance to the actress or character in the movie.

German Mechanic: this had the same 5 points of articulation and came with a wrench and an oil drum, however he was unable to actually hold the wrench in either of his hands so in many cases it was lost and it is now difficult to find one complete with the wrench.

German Soldier : 5 points of articulation: neck, 2 shoulders, and 2 hips. Accessories: a crate and a rifle.

Cairo Swordsman: The last figure in this series was the Cairo Swordsman who had the regular 5 points of articulation and 2 swords.

Series 3 consisted of only one 7-inch Indiana Jones figure sculpted by the team at Gentle Giant.

Unlike the previous figures this one had an amazing 14 points of articulation: the neck, 2 shoulders, 2 arms, 2 hands, torso, 2 hips, 2 knees and 2 knees. 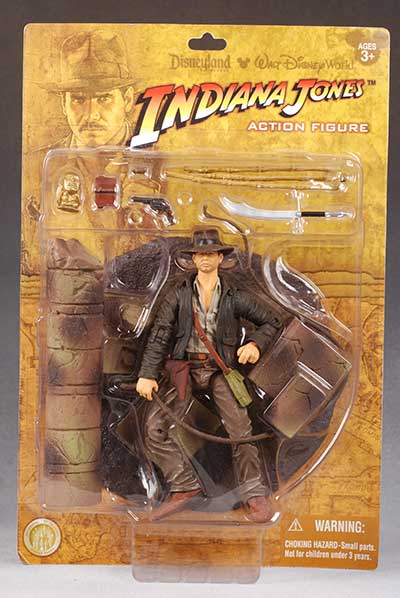 Despite being exclusive to the Disney theme parks these are still fairly readily available on eBay for about $10-$15 and approx. $100 a set of 5. The hardest of these to find seems to be the Marion figure but it doesn't seem to sell for much more than the others.

The VinylmationIndiana Jones figures tend to go for a little more, averaging between $20-$30 each.

The 10-inch Indiana Jones Vinyl Statue, although fairly cool looking, was poorly sculpted and lacked any real detail. The figure’s pose was very similar to Indy’s pose on the Raiders of the Lost Ark poster and DVD box. He also came with his trademark whip and fedora. 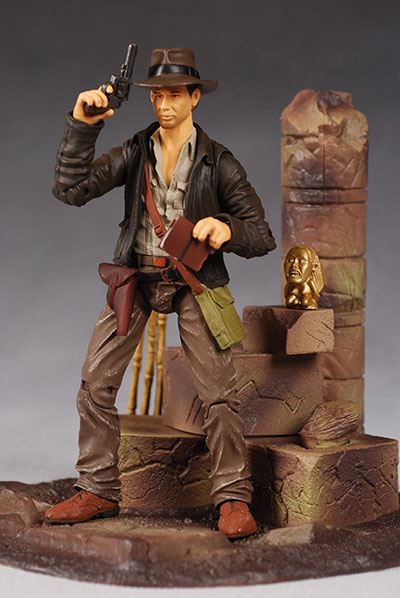 This figure, although a Disney exclusive, was released as part of the Classic Collection GI Joe line, There were two versions of this figure released a Caucasian or African-American. The African-American sculpt is fairly new for Hasbro.

These figures were released to showcase the Indiana Jones Epic Stunt Spectacular attraction at the Disney-MGM Studios, Florida, hence the African American version of the figure as one of the Indy stunt performers was also African-American.

This figure is probably the rarest and hardest to find out of all the Indiana Jones figures and fetches about $250-$300 on eBay but they are rarely listed. The regular 12-inch Indy figure by comparison usually sells for about $200. 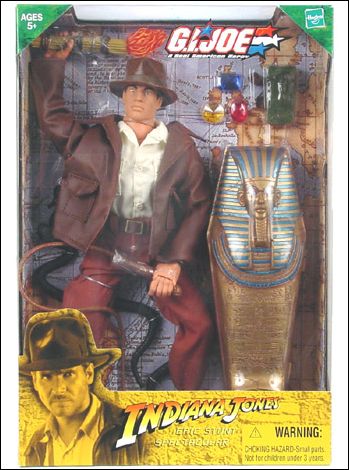 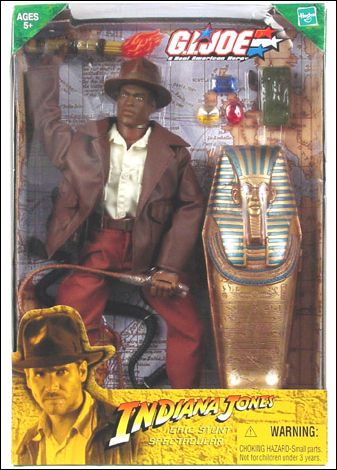 Released in 2007-08 this combined two iconic figures into one piece with a surprising good effect. Mickey seems to lend himself very well in the persona of Indiana Jones and looks comfortable and at home in the trademark fedora, leather jacket and whip in hand!

This was meant to be a little novelty item sold exclusively at the Disney theme parks, so it was not  a sculpting masterpiece but it was received much better than anticipated, with attention paid to several nuances in the actual Indiana Jones costume.

Including the shape of the hat, the design and texture of the satchel, and the placement of pockets and buckles.  Of course, all have been simplified from the cinematic design in order to accommodate the animated nature of Mickey Mouse.

All-in-all this was an excellent piece and well worth its $10 and surprisingly it still only sells for between $20-$30 on eBay now, well worth the investment I think both from a collectors point of few and as a unique item to add to your collection.

In fact I like this so much I will definitely be adding one to my collection for no other reason than I LIKE it! 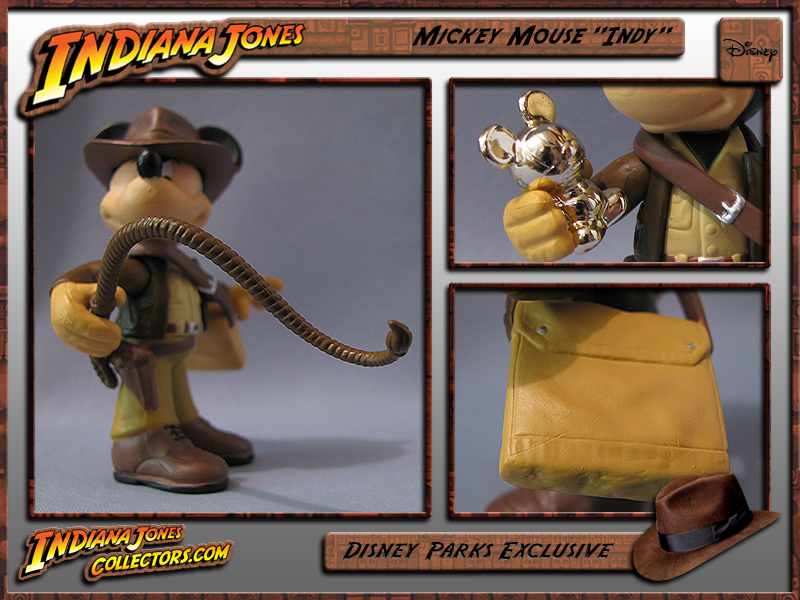 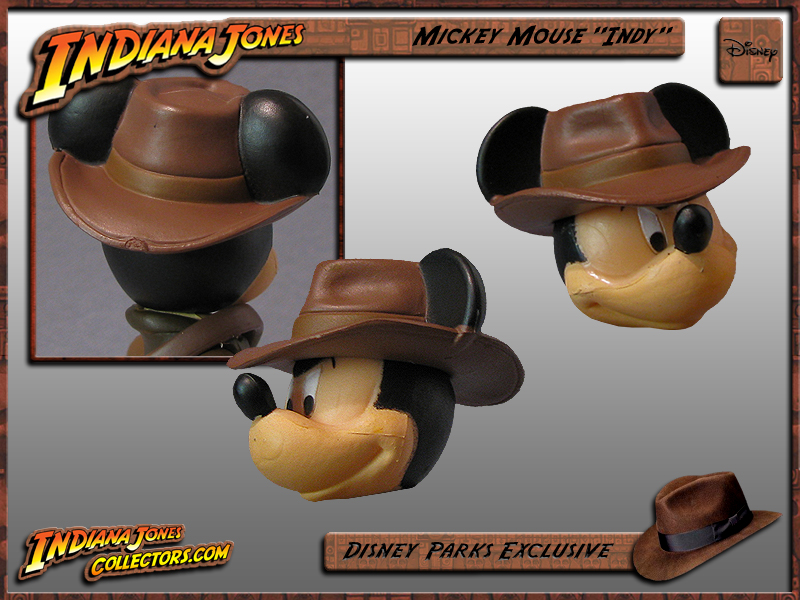 In January 2014 Disney released a set of Indiana Jones figures for their popular Vinylmation vinyl figures. These were only available from D-Street stores, Disney Parks and on the Disney Store website

The series consisted of 8 figures sold in blind boxes, meaning you didn’t now until you opened the box which figure you got. Each retail case contained 2 of each figure and a chase figure, a vinyl gold Golden Idol.

Designed by Thomas Scott they retailed for #12.95 and are available on eBay for about $20 and the chase figure for about $20-$30 depending on the figure and availability at the time, but these don’t seem to be particularly popular at the moment so you can buy them for very reasonable prices. 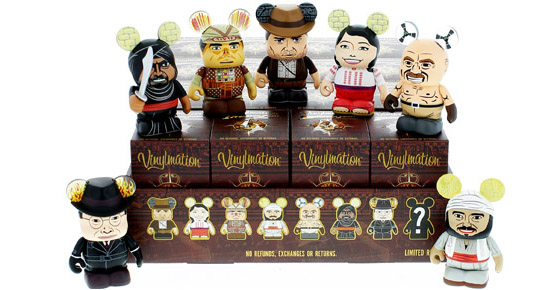 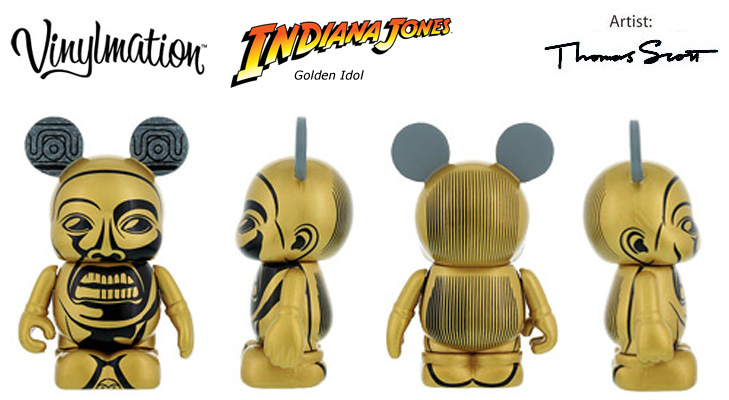