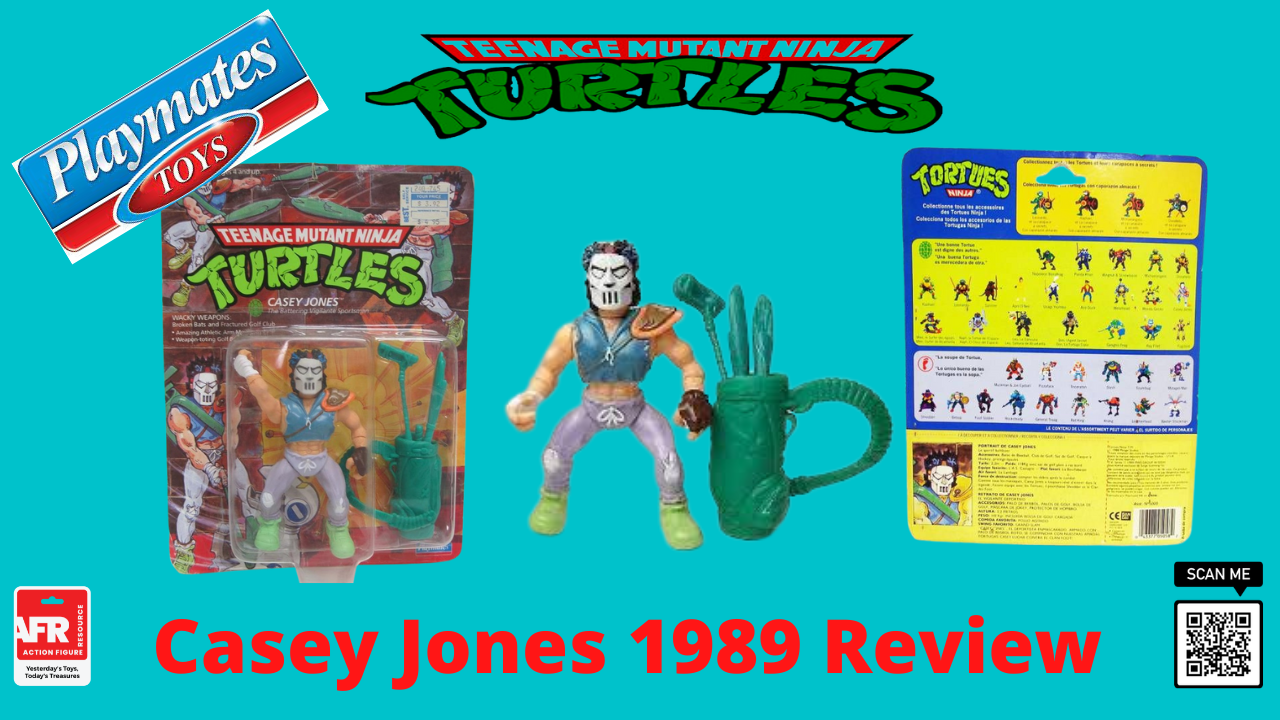 Playmates Casey Jones was a very important character in the Teenage Mutant Ninja Turtles (TMNT) series produced by PlayMates in 1988. The series, which was very popular from the get go, ran from 1988 to 1997.

The Casey Jones character was a particularly interesting one, perhaps due his choice of costume and his approach to solving crime. He wore a hockey mask to conceal his identity, a sleeveless top that didn’t quite cover his entire stomach and was torn at the lower part, sweatpants and a pair of sneakers.

Playmates Casey Jones was a pretty decent athlete as he was a skillful hockey player and also had impressive fighting skills. He lived a boring life, spending a lot of time watching crime stories until he decided to become a vigilante and go after the bad guys in his city.

It wasn’t uncommon to see him going to the extreme in dealing with these bad guys. He eventually formed a formidable team with the turtles and together, they protected the city of New York. 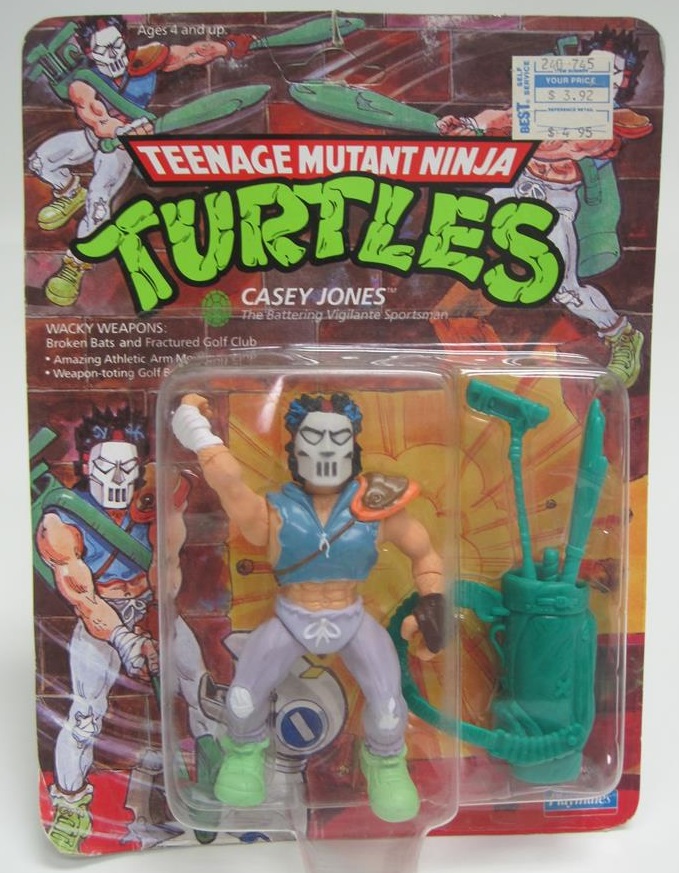 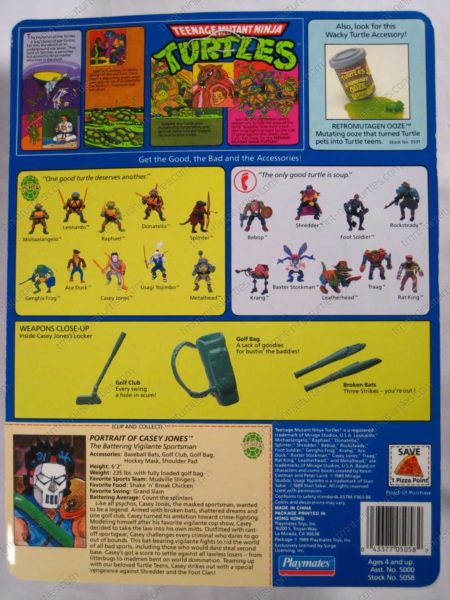 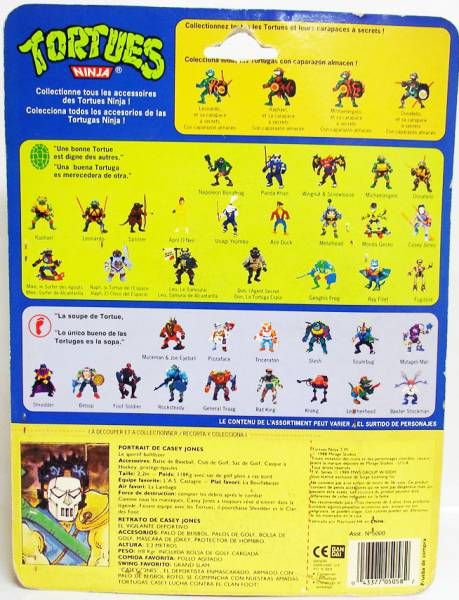 The Playmates Casey Jones  action figure was released by PlayMates in 1988. The figure was packaged on a very colorful 19-back card featuring all the other characters from the TMNT series; 10 good guys and 9 Foot Clan figures, while the figure itself is displayed on the front with his right arm is raised up and the left one is held down. 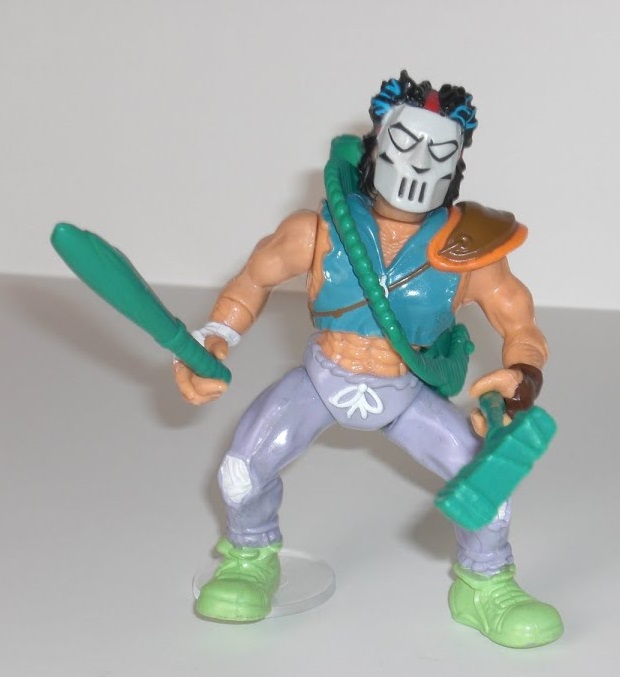 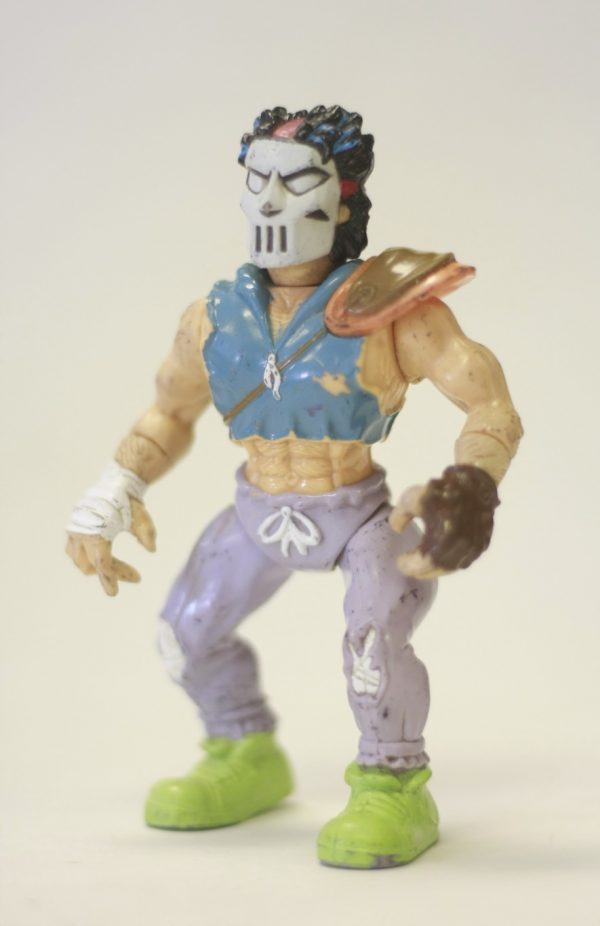 Overall, the Playmates Casey Jones was well sculpted but it looked like someone had some fun with this one as he had an unnaturally large and obvious bulge in his groin region which was unnecessary. Other than this he was well proportioned and sculpted. His body was sculpted particularly well with nicely chiseled abs, and his face was covered with a detailed irremovable hockey mask.

The shoulder pad across his left shoulder was also very well sculpted with just the right thickness and orientation. The figure could easily be stood on its feet, thanks to the way the legs were sculpted with considerable space between them and feet with a relatively large and flat surface area. 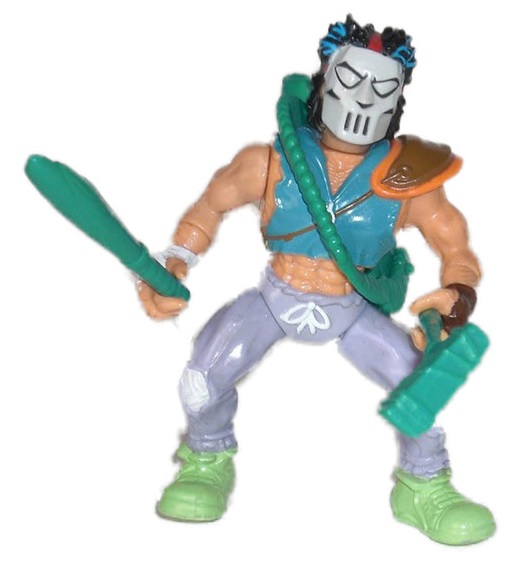 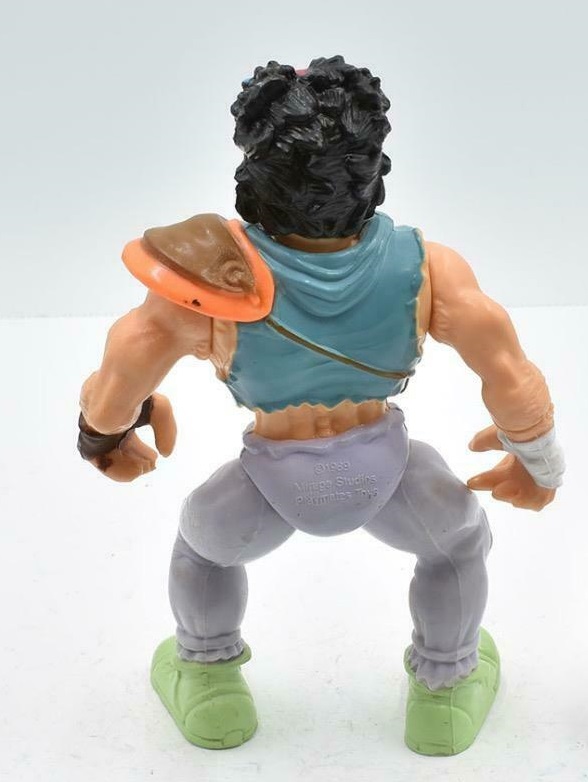 The painting, as with the sculpting, was also very good with all the different colors perfectly contrasting each other. The figure had a white hockey mask, a bluish green tank top that was ripped at the lower part, purple pants and a pair or green sneakers. He also had a brown shoulder pad across his left shoulder, a brown glove on his left hand and white bandage wrapped around his right hand. The only flaw with the paintwork was some overlapping of blue on his hair and some traces of red. 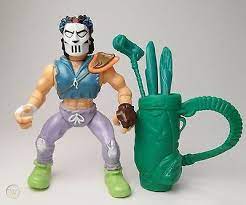 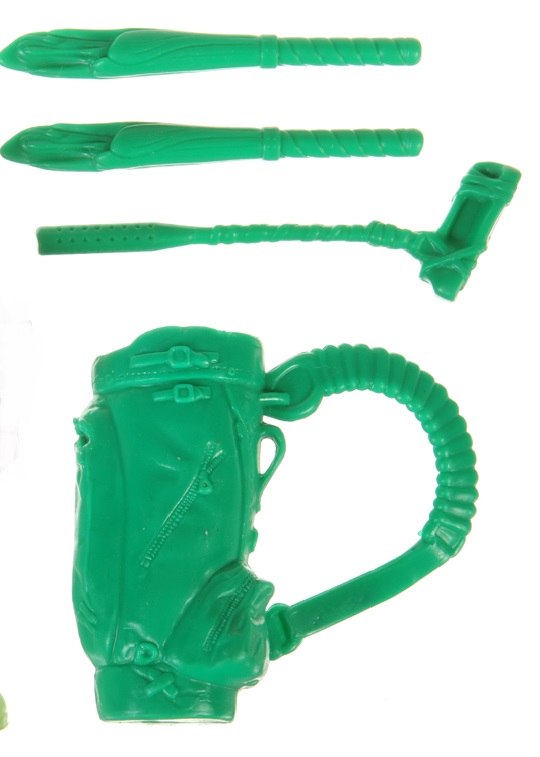 The figure came with four accessories, all in the same green color. The golf bag could be hung across his shoulders and was big enough to carry all the clubs and bats, any of which could be fitted into his hands. However, when carrying the bag, his legs needed to be spread a little bit wider apart to ensure stability. Perhaps, the number of accessories this figure came with played a part in it being one of the most popular. 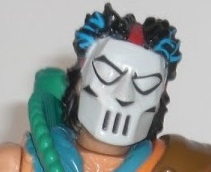 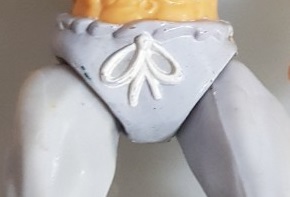 Despite looking , I couldn’t find any variants and it seems the Casey Jones figure was actually one of the rare figures without any.

Playmates Casey Jones Values as of 2022 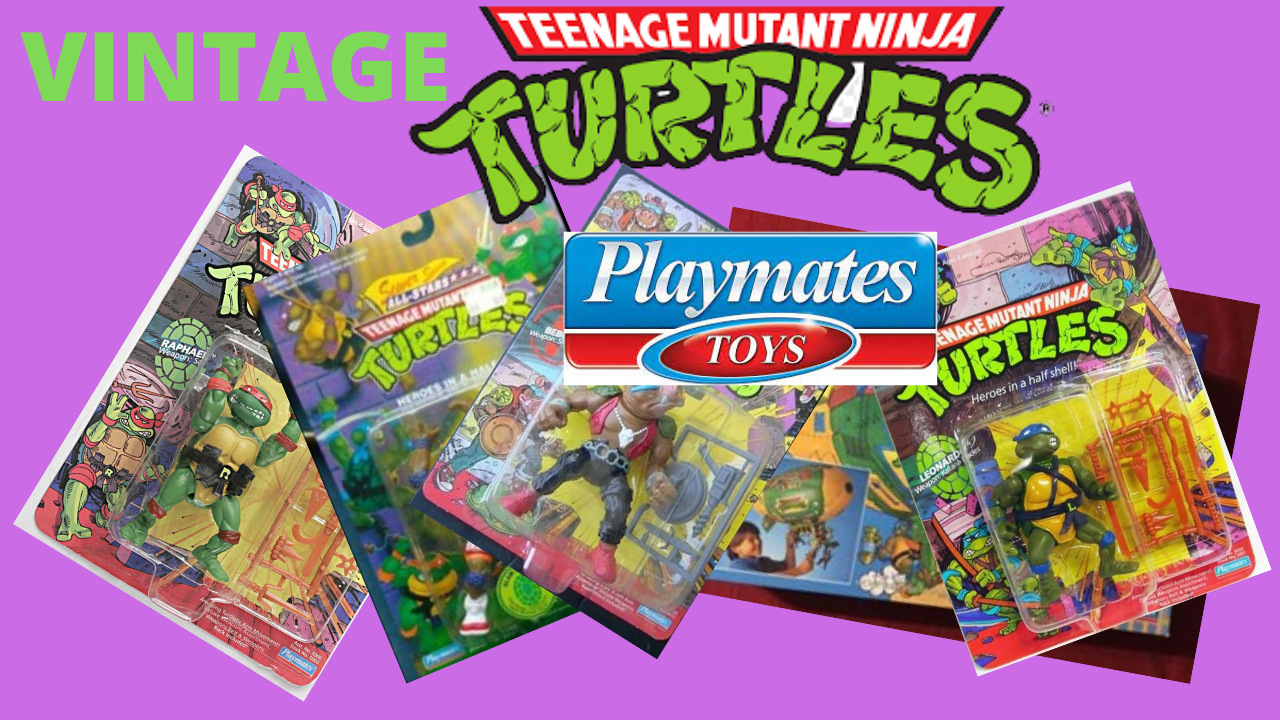 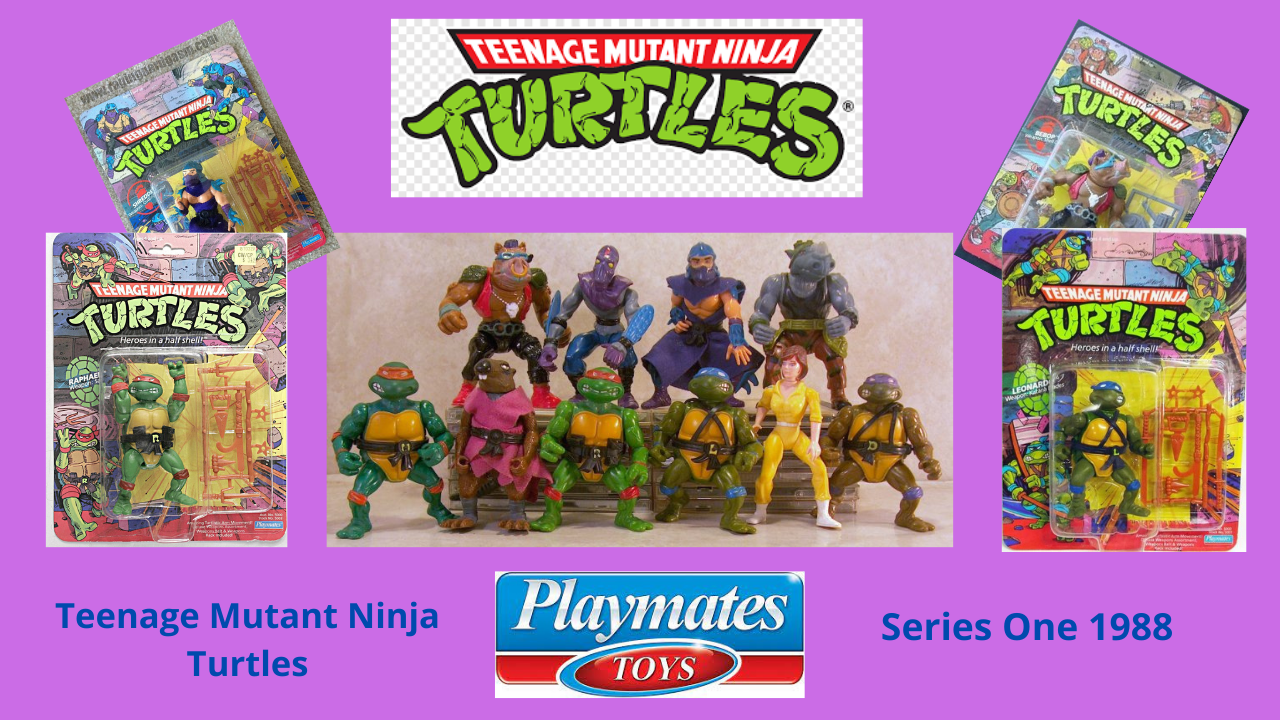 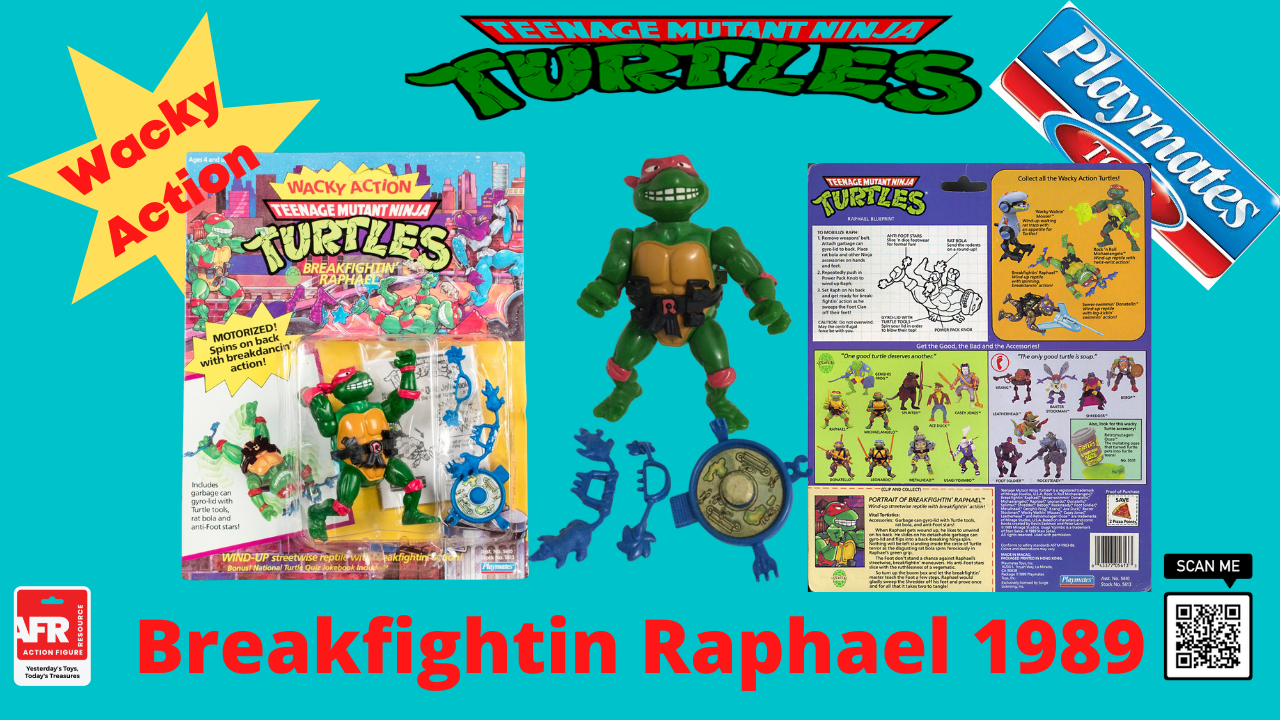