Between 1994 and 2007 Toy Biz created the Spider-Man Animated series of action figures and playsets based on the original Spider-Man: The Animated TV Series. During this time, fans enjoyed over 20 lines of Spider-Man figures that also came with hundreds of variations.

Most of the figures in the Spider-Man Animated line was mass-produced with very little attention to sculpting and paintwork. Due to this, many of these figures still be easily be acquired today. As well as the figures Toy Biz also released some really cool playsets. Although more than 20 years have passed many of these toys still have their appeal and are popular with collectors..

Today, I will be looking at some of the Spider-Man Animated playsets and figures that were produced under the Spider-Man The Animated series franchise. These playsets are quite interactive, fun, and easy to use. Some of these sets also came with Spider-Man figures.

These playsets were replicas of buildings from the animated series and allowed kids to stage their own super-hero fights. Some of these toys were quite complicated to use with many different parts.

The four playsets I am looking at here are: 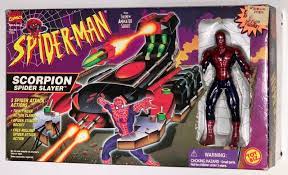 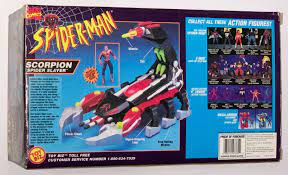 Spider-Man is never short of evil villains and creatures trying to harm or kill him. When he's not busy fighting the goblin or trying to outsmart Dr. Octopus, his Spidey senses keep him alert for any dangers.

The people at Toy Biz were quite imaginative, and to pose a challenge for the friendly neighborhood superhero, they came up with the Scorpion Spider Slayer. This was a huge powerful scorpion looking vehicle locked and loaded ready to take-on Spider-Man.

The most prominent image on the front of the box was the huge Scorpion Spider-Slayer firing a rocket from its tail and jaws while grappling with Spider-Man in one of its pincers.

The right side of the front panel had a rectangular window to showcase the exclusive Spider-Man figure that came with the Scorpion Spider Slayer. The reverse of the box is almost the same as the front but the image of the Scorpion Spider-Slayer had its features labelled.

This Spider-Man Animated vehicle itself looked like a mechanical scorpion. Its body was painted in red, green, black, and silver. The tail end had a space for the scorpion's missile. There were free-rolling wheels at all six legs that made it easy to move the figure around. Although there was some movement on the tail part, the pincers didn’t move, so it couldn't really grip anything.

The overall sculpting and paint work were generally good. Most of the tiny sculpted parts were so well crafted that they looked like they could actually move.

The Spider-Man Animated figure that came with the Scorpion Spider Slayer was painted in a red and black costume with silver linings. This costume was capable of making Spider-Man invisible during attacks. 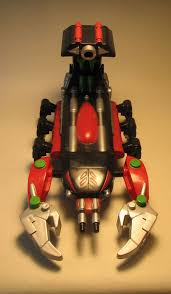 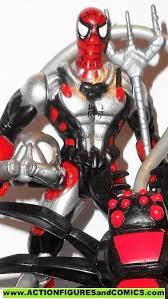 Hi, there! I need your help, I have found it extremely difficult to find good quality images of these playsets and vehicles so if you have any you would like to share, with full credit given, please contact me HERE 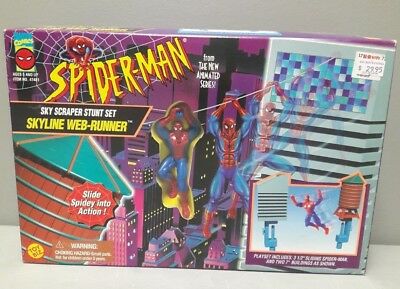 Spider-Man was famous for swinging from building to building, high above the noisy and crowded New York streets, chasing down bad guys, or just having fun with his web line. This playset captures this side of Spider-Man the best way Toy Biz could.

The Skyline Web-Runner came in a large display box set. The front panel of the box featured the Marvel comics and Spider-Man logos, as well as the playset's name are on the right side. There was also a window in the center of the front panel  showcasing the Spider-Man figure that came with the set that perfectly fitted in the image of Spider-Man sliding down the line between two towers against the backdrop of New York City. The reverse of the box had an image of the Spider-Man figure racing along his web-line between the two towers, with different parts labeled. There were also images of  other figures and playsets available in the line.

This Spider-Man Animated playset consisted of two 7-inch buildings. One was painted red, with a green top, and looked like a water tank, while the other was grey, and was meant to look like a skyscraper. The buildings had fully adjustable clamps that made it easier to attach them to surfaces like tables. There was also a Web-Runner web line that attached between the two buildings with a blue sliding device that made it easy for Spider-Man to slide down the line. The Spider-Man Animated figure was smaller than the standard Toy Biz Spider-Man figures and was only 3½ inches in height and was a regular designed figure with basic sculpt and paintwork. 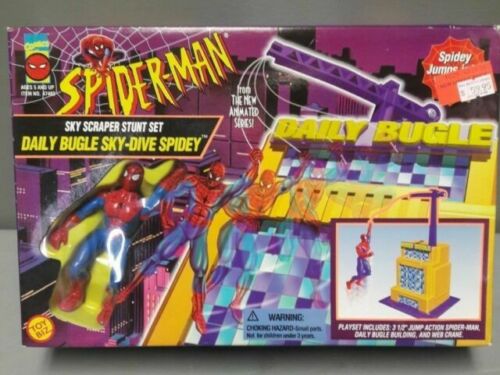 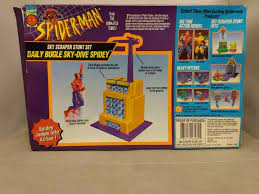 The Daily Bugle Sky-Dive Spidey Spider-Man Animated playset display box came with the Marvel comics and Spider-Man logos on the front panel, as well as the set's name, all written in iconic fonts on the top left side, and the Toy Biz logo at the bottom.

Similar to the Skyline Web-Runner playset, the Spider-Man figure that came with the set was in a cut-out window section of the box and posed in such a way that it blended into the image of Spider-Man swinging from a crane attached to the Daily Bugle. The back of the box shows an image of the playset with Spider-man swinging from the ceane.  There are also images of the other figures and playsets that were part of this line.

Inside the box, there was a simple yellow building with very minimal detailing that represented the Daily Bugle. There was also a purple web crane and a flat platform that attached to the building. As with the  Sky Scraper Stunt Set Skyline Web-Runner there was a basic 3 ½ inch Spider-Man figure that was in a permanent swing pose. 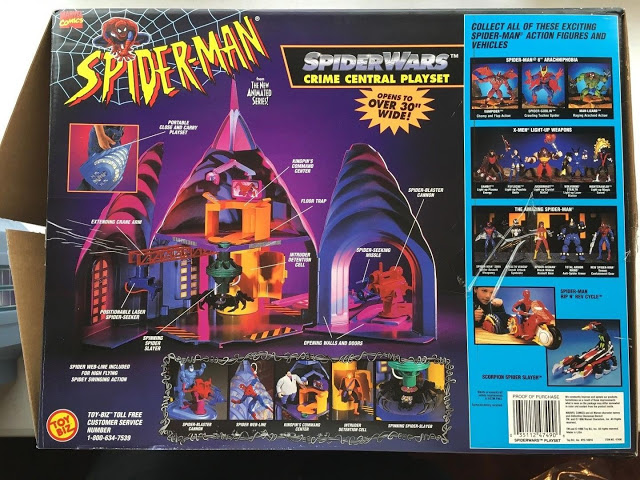 When Kingpin rose to power in the criminal underworld, he ran his operations from a building that came to be known as Crime Central. Crime Central was built like a fortress, and because of this, Spider-Man once lost the signal to a Spider-Tracer he placed on Rhino's leg when Rhino entered the building.

This was one of the most elaborate playsets made by Toy Biz. At first, it looks like it is just the 15 inch Crime Central building, but then it opens up a 30 inch wide playset to reveal traps and weapons designed to keep Spider-Man away or take him down if he got too close.

Kingpin's Crime Central was fitted with a Spider-Blaster Cannon that fired a Spider-Seeking Missile, a floor trap, a spinning spider slayer, a positionable Laser Spider-Seeker, and an intruder detention cell.

There was also a command area for Kingpin and an extending crane arm. The entire set could close up into a portable carry case. The set also included a web line to give Spider-Man his swinging action.

On the front side of the box, there was an artists impression of Spider-Man under attack as he swings across on his web-line over the building with Kingpin in his command center and The Hobgoblin seemingly captured in the intruder cell.

The spinning Spider-Slayer tries to get Spider-Man, and the laser fires at him, while Rhino fires a spider-seeking missile at Spider-Man.  There were also images of different features of the playset on the front of the box.

As expected, the Marvel comics and Spider-Man logos were also featured on the box. On the reverse there was a more detailed image of the set, along with different parts labeled out and all its features. There were also images of the other figures and playsets in the line that fans could add to their collection.  Unlike the Sky Scraper Stunt Set Skyline Web-Runner and Daily Bugle Sky-Dive Spidey playsets this was made to scale for the standard Spider-Man Animated action figures.