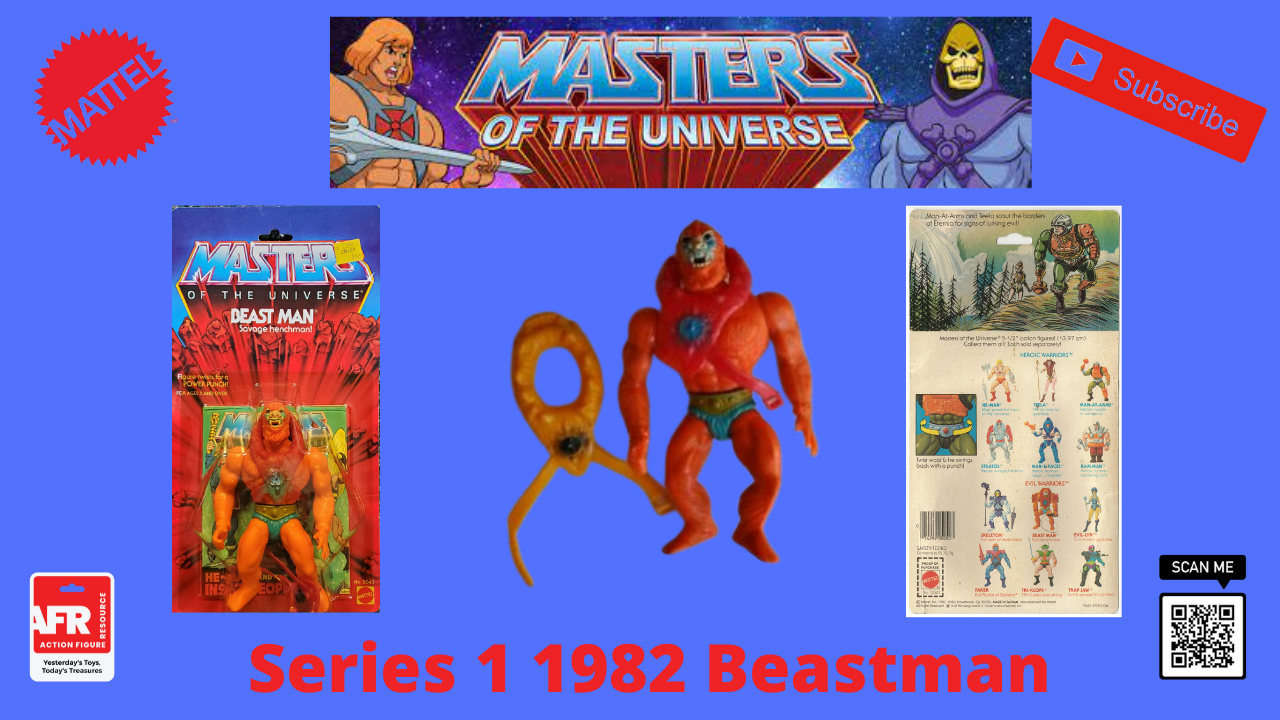 Mattel’s Beast Man was released in 1982 was a gorilla-like character with great strength and was mostly famous for being Skeletor’s right-hand man and most loyal servant, a role which he played for the entire series.

His origin was not really stated in the series, however, there are several theories suggesting where he came from. One of such, and perhaps the most widely accepted, suggests that the scary Beast Man was once a regular human, originally from Earth (surprisingly, right?).

He had a farm, on which he usually abused his animals and then at some point, he departed Earth on a space mission as the Chief technician of the crew.

They crash landed and he found himself on Infinitia, where he was captured by Skeletor who turned him into a monster and recruited him. 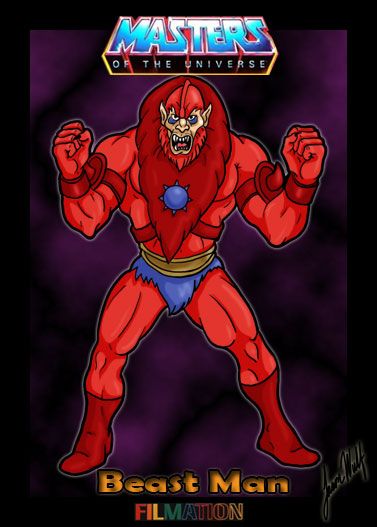 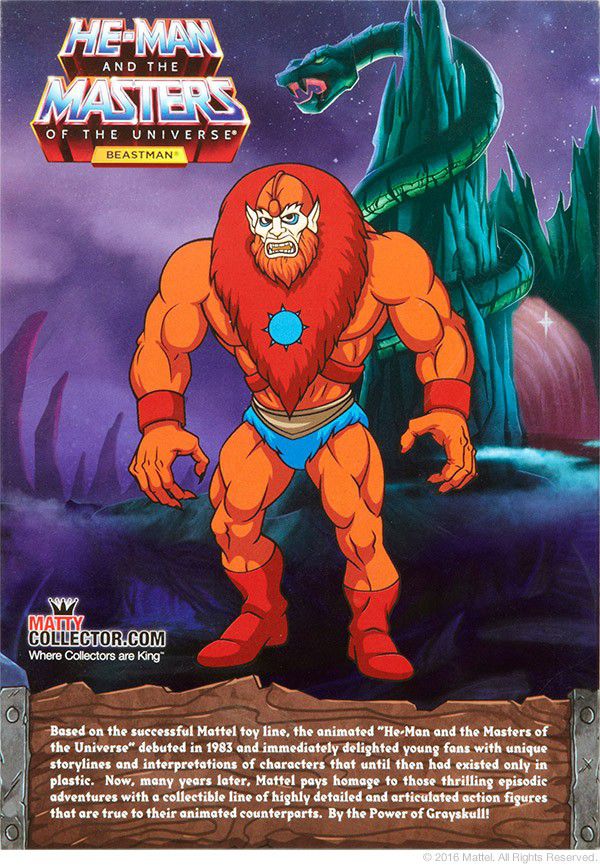 In Germany’s “Night Over Castle Grayskull,” it was reported that he used to be a brilliant scientist who changed a powerful magic plate to prevent it from getting into Skeletor’s evil hands. Skeletor got furious when he found out and tortured him for days before eventually ridding him of his intelligence and making him a loyal servant.

Whatever account one chooses to believe, the important thing is that Skeletor turned him into a loyal servant who served him unquestioning for years.

Beast Man was so powerful that he had the power to control all beasts, and this made him an extremely useful servant to his master.

Beast Man and his accessory were conceived from ideas for previous action figures/characters and like other early releases, he was initially produced with a soft head to save on costs. 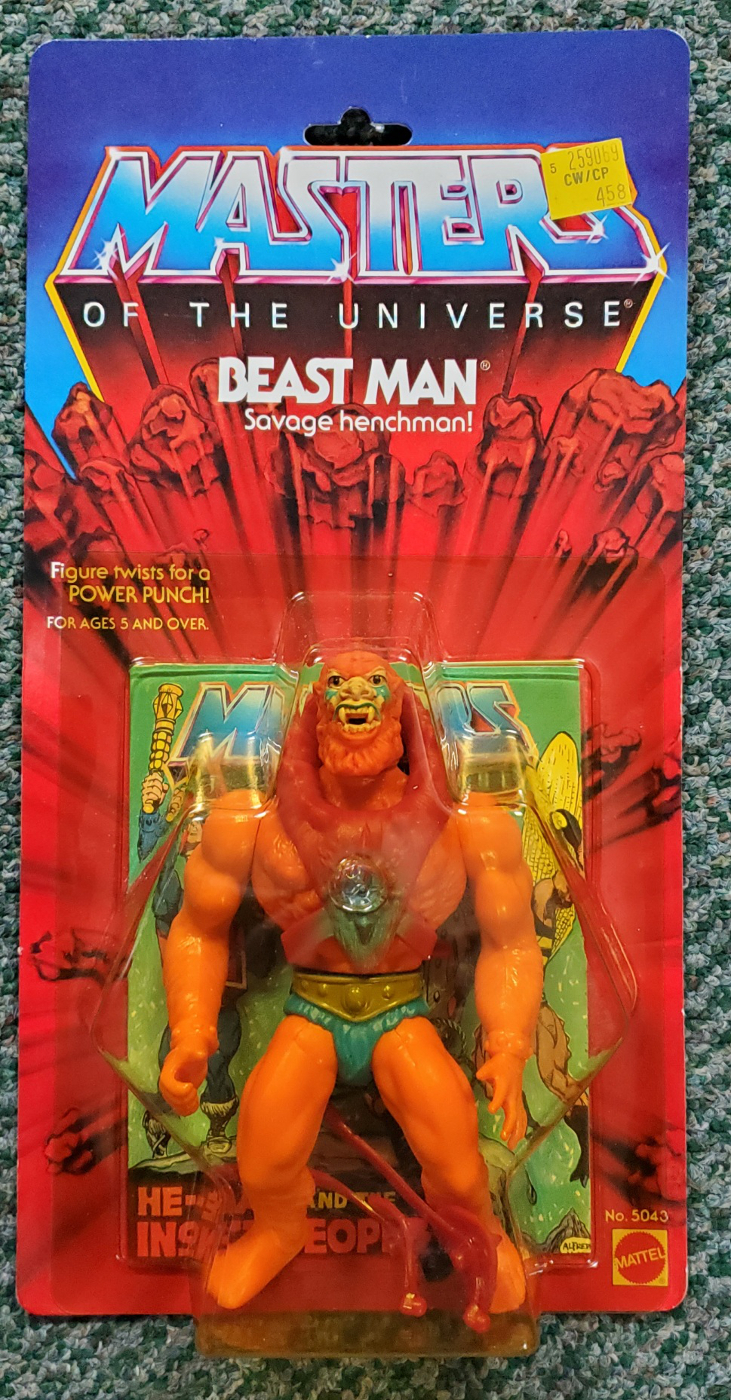 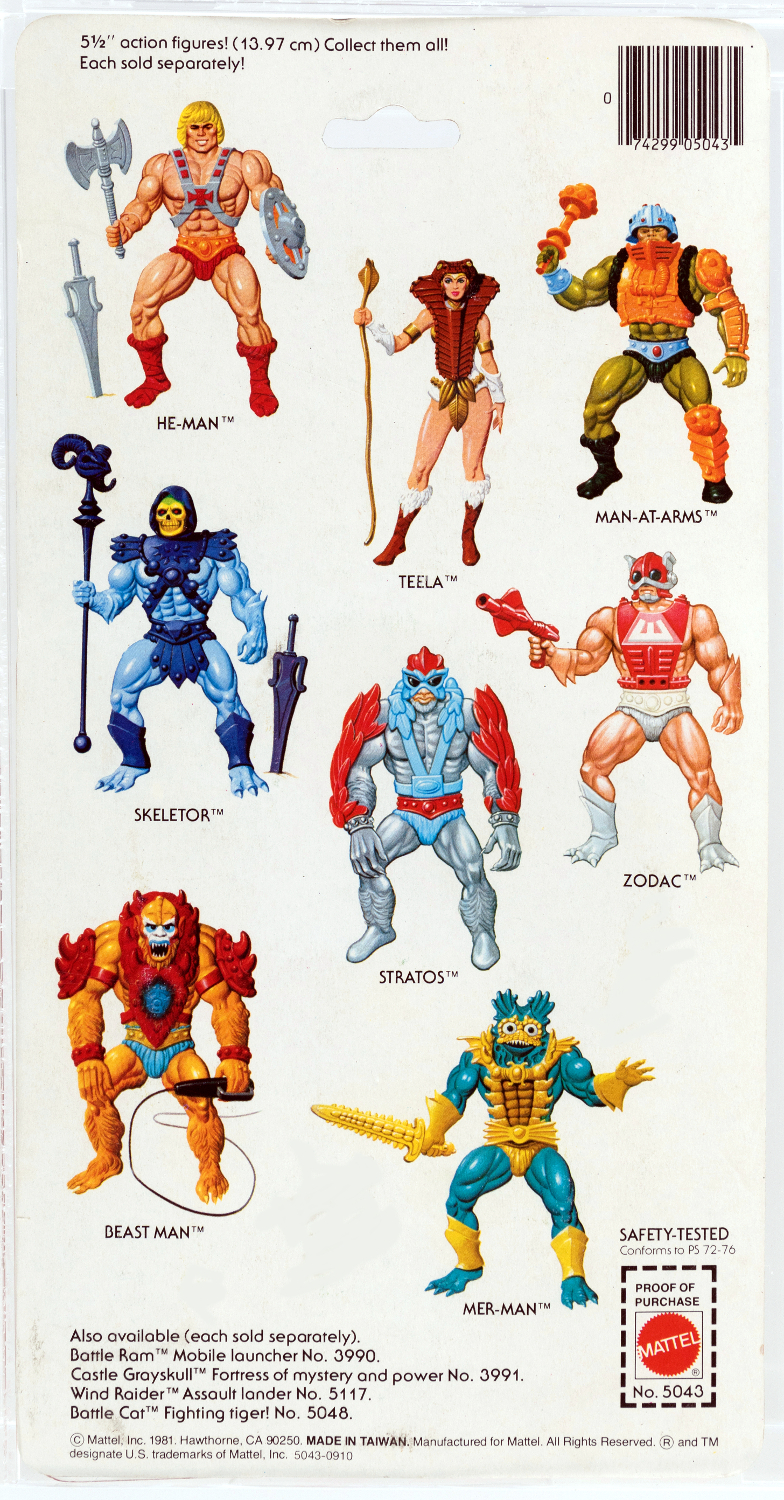 One of the earliest Masters of The Universe (MOTU) figures to be created by Mattel, Beast Man was released in 1982, much to the delight of fans, even though he was a villain.

The action figure came on an 8-back blister card featuring the other MOTU characters on a plain white background and the 5.5 inches figure was displayed on the front, under the MOTU logo.

He was displayed standing with his knees at an angle and his hands by his sides, although the right arm was slightly bent at the elbow. 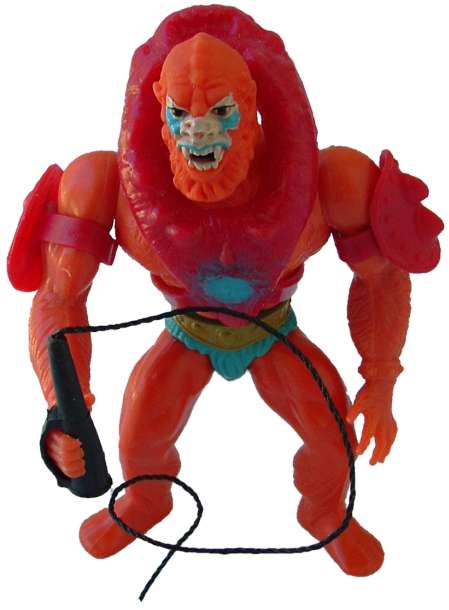 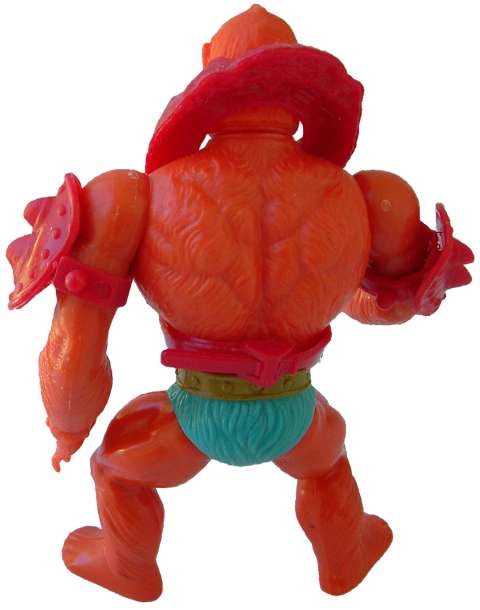 The figure was a beautifully made with excellent sculpting which really accentuated his gorilla-like appearance. He had smooth upper arms and upper legs, but the lower parts were visibly hairy, as was his neck and chest.

His big fangs were perfectly sculpted, so was his belt and loin cuff. His chest armor had a circular crest perfectly crafted into it, this could be removed or put back on by lifting it over his head. His arm guards had two spikes on each which he wore on either arm.

His right hand and whip handle were a perfect match – the hole was just tight enough to allow for the hand to grip it tightly but not so tight to create any difficulty when inserting or removing it, the twist function of the whip was very cool

Beast Man was sculpted with a villainous expression visible on his face, but the nose and right thumb could have been done better. He also was sculpted without any footwear–after all, he is a beast, right? 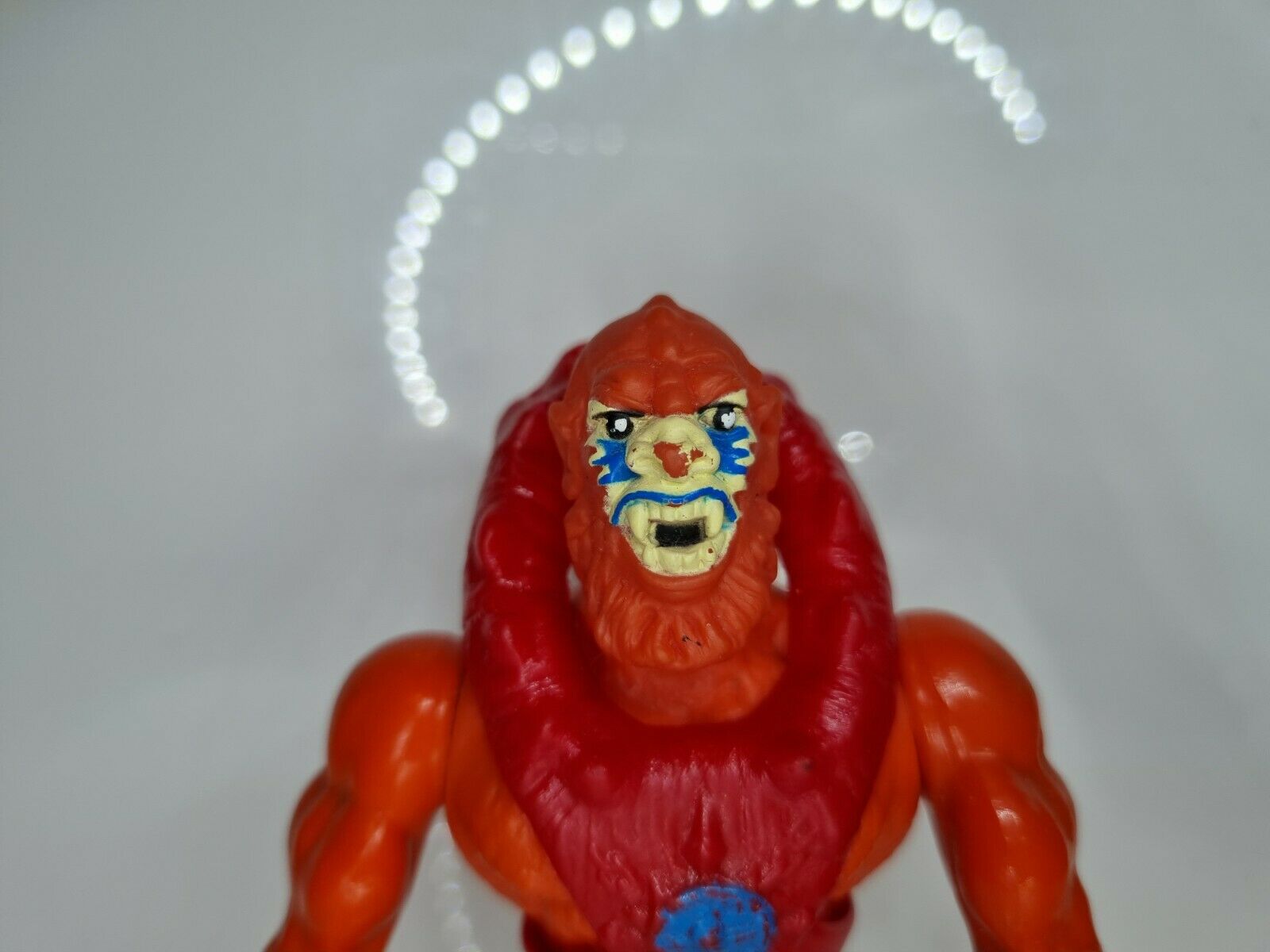 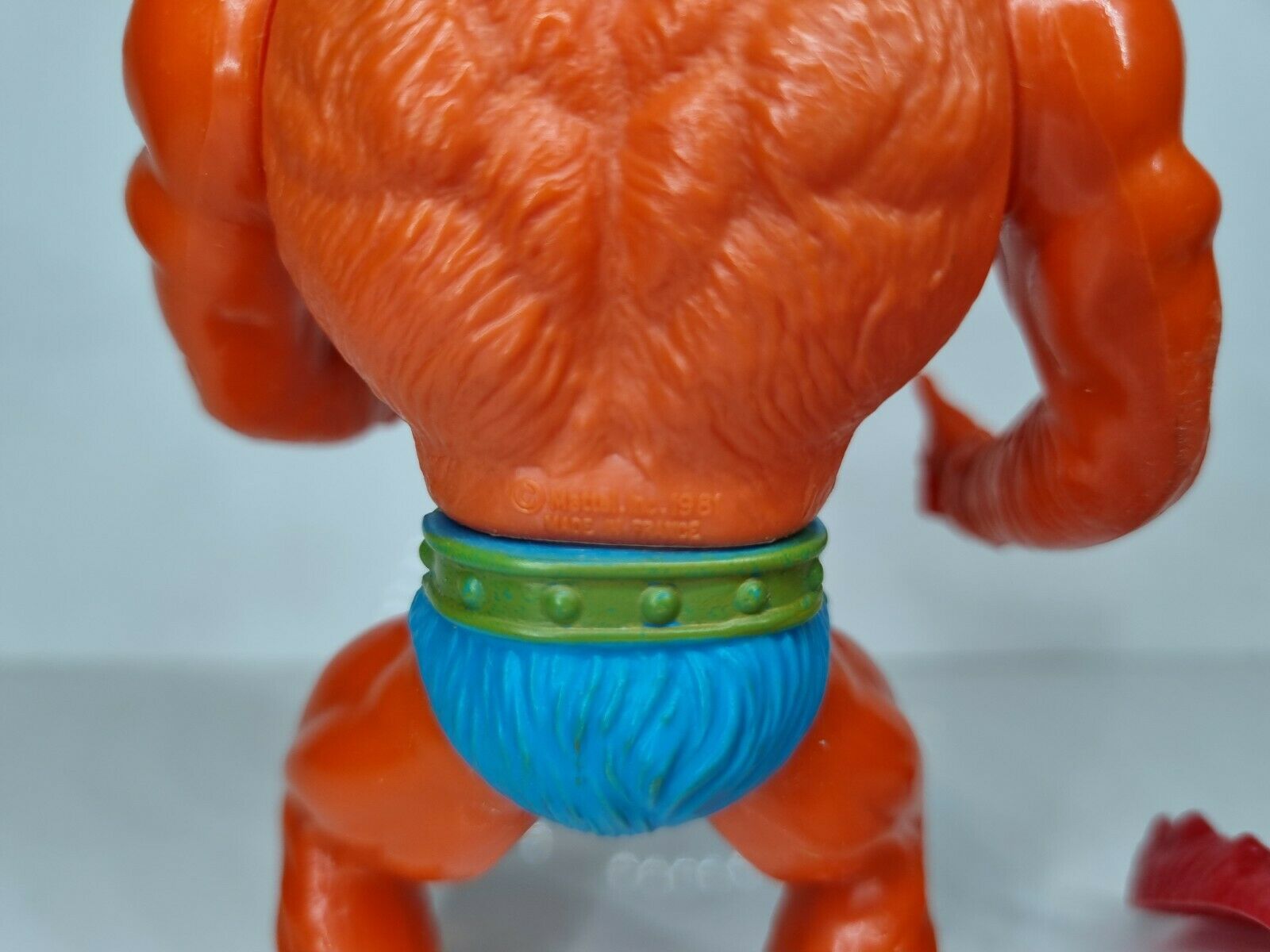 The painting of the figure was beautifully done, with no overlapping or smudging of colors. His entire body was painted an orange color, except for some parts of his face, such as the white fangs and nose, blue upper lip, and lower eyelids, and finally his black eyeballs and lashes.

The arm guards and chest armor were both red, while the crest in the center of his armor and his loin cuff were blue. His belt was a dirty green shade and lastly his whip, which was his only accessory, was black. 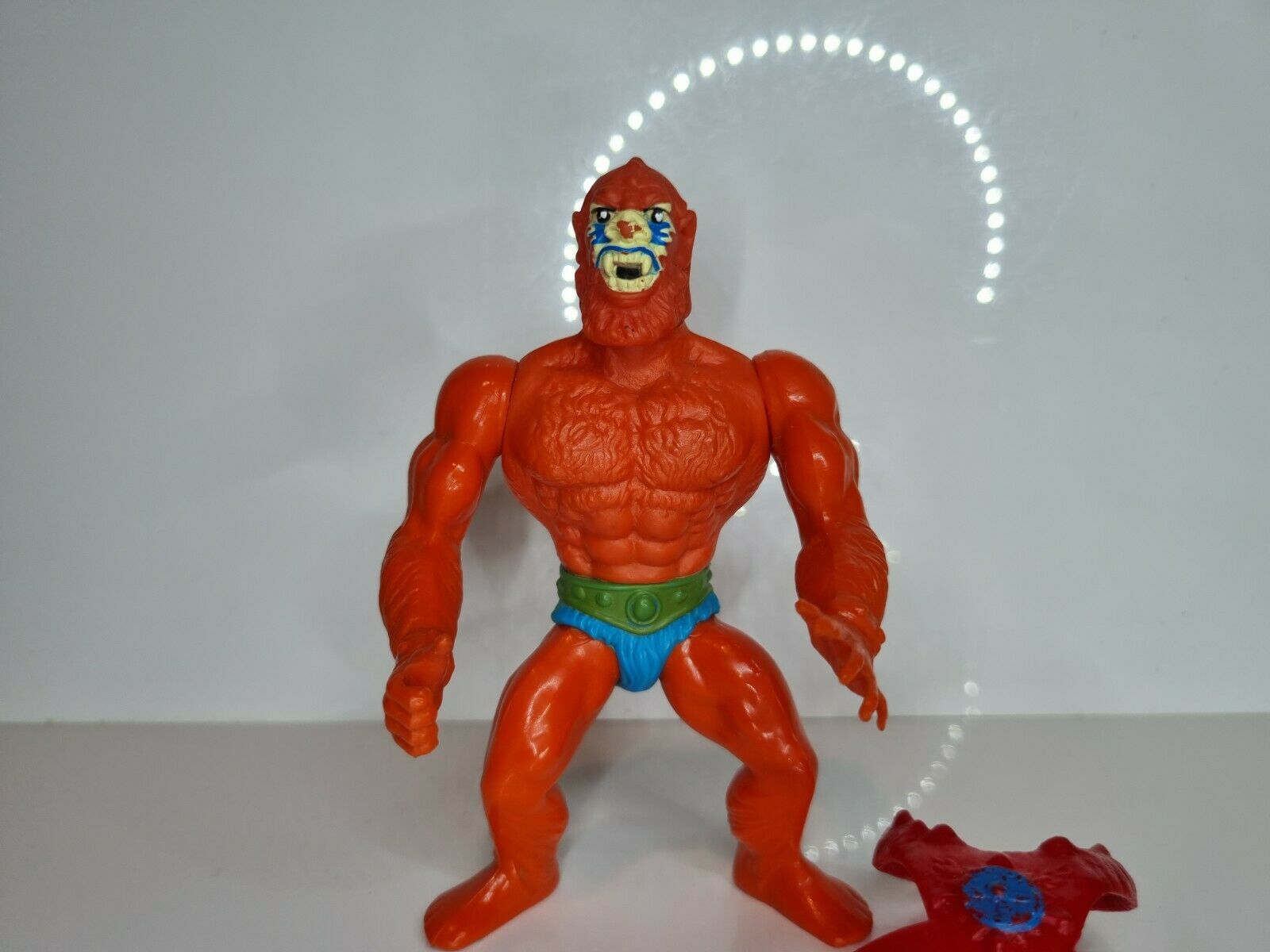 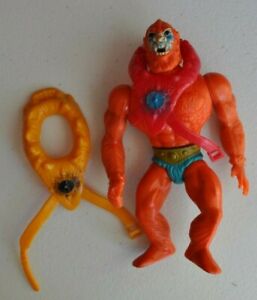 Beast Man also had the signature power-punch action, which could be triggered by turning the figure’s waist while holding his arm and then releasing it. The result was the figure quickly snapped back into his original position delivering a punch to his foe. Performing this action with the whip in his hand also produced the effect of him seemingly attacking his foes with the whip.

As with most of Mattel’s early MOTU figures Beast Man only had the standard POA. His legs had no joints on the knees, and he was sculpted with a slight bend of the knees.

There was a swivel joint on his neck, which allowed him to turn his neck to the left and right and a ball and socket joint on his shoulders, allowing him to move his arms up and down. 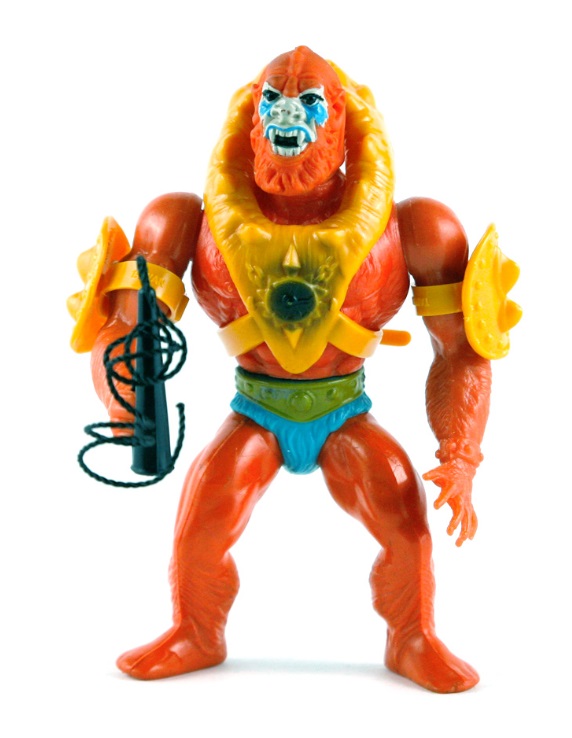 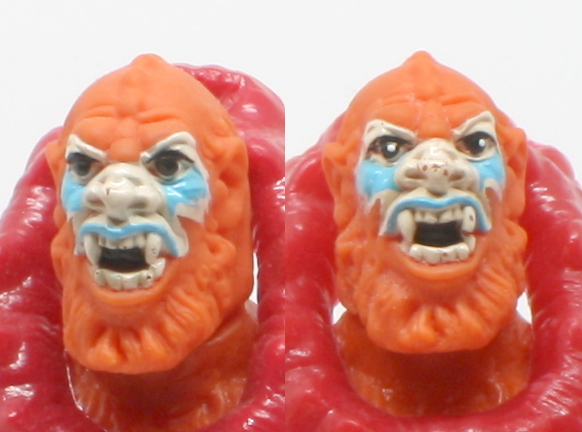 This were several variants of this figure produced internationally, but the very first figures were released in Taiwan as the original 8-back figures and COO stamp.

In Argentina, Top Toys produced several variants of Beast Man with a variety of colors and body parts. Other countries, which produced different variants, included Spain, France, and Brazil.

After Mattel relaunched the Masters of The Universe line in 2002, the new Beast Man figure was much larger in size and was sculpted with a hunchback.

The color scheme was toned down as can be seen from the deep brown armor and deep orange fur. Also, the arm guards were sculpted on the whereas the ones on the original 1982 Beast Man could be removed. There were two variants of his head sculpt, one with off-white pupils and one without.

The action feature was also different, when you clicked a small button on his back, and he smashed his hands down aggressively.

Finally, unlike this 1982 release which was a soft head, the subsequent releases were hard heads. 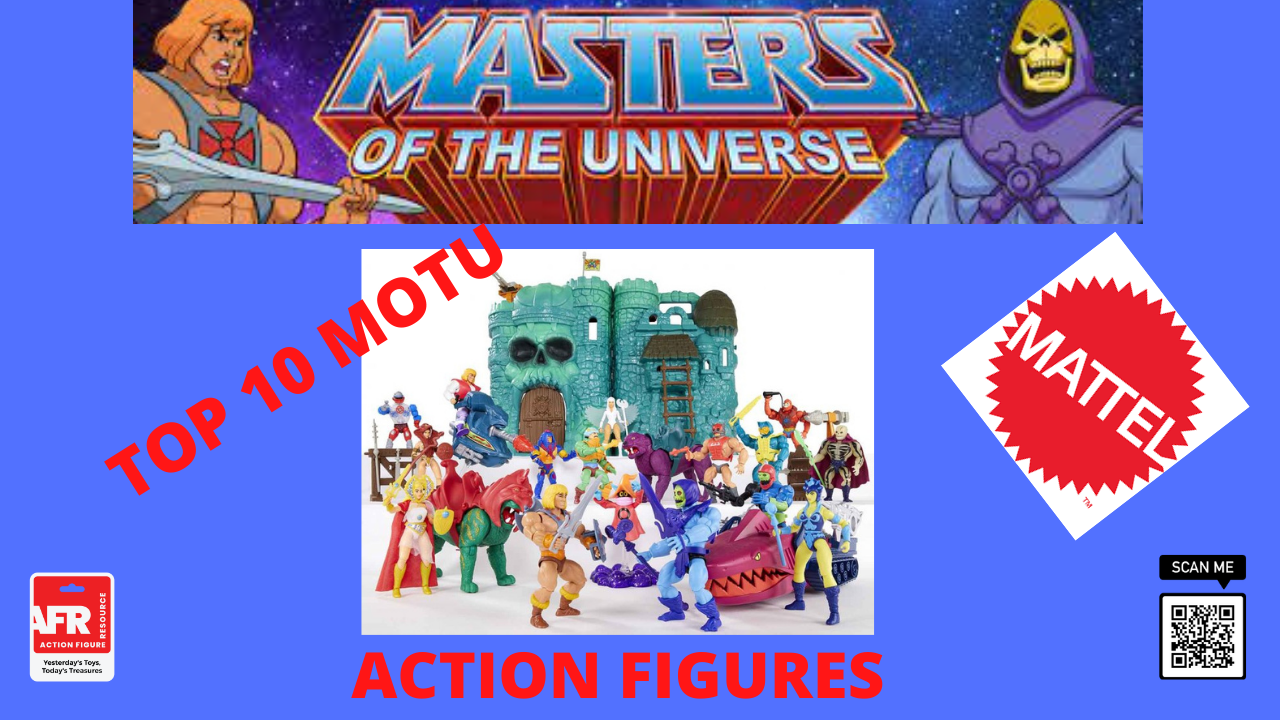 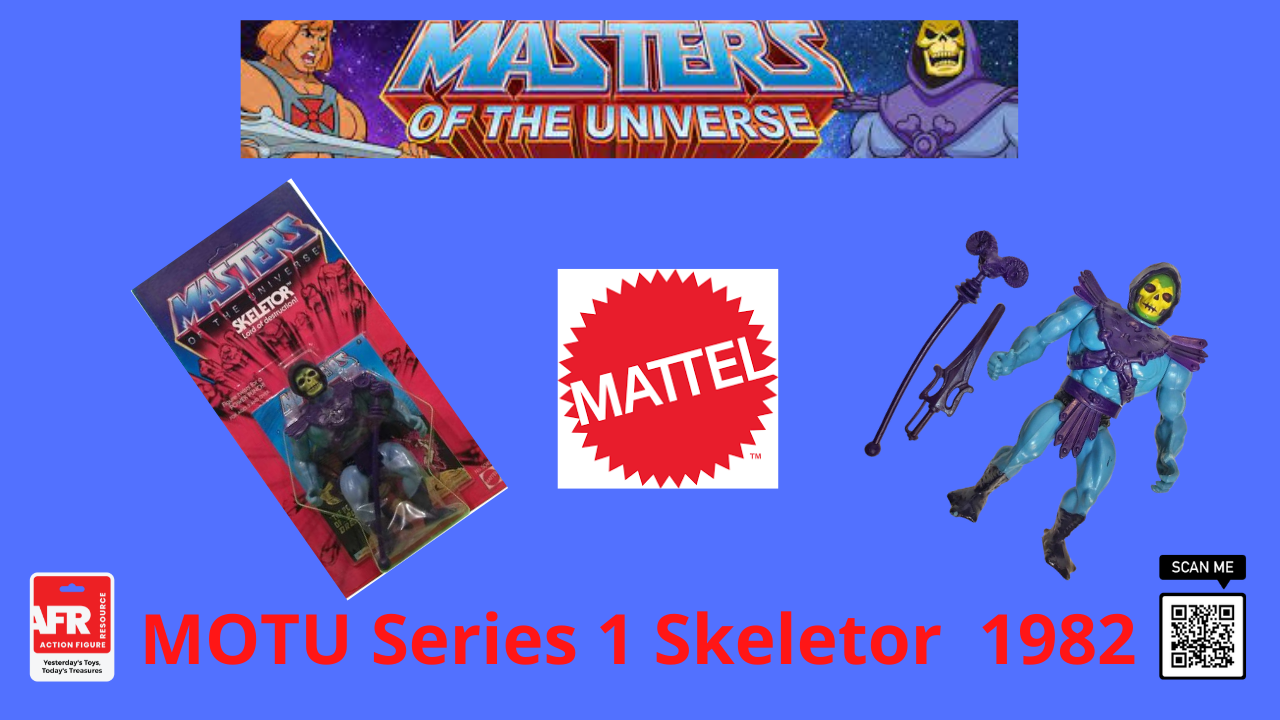