This is a guide to Marvel’s Fantastic Four action figures, along with some tips on the most valuable figures on the secondary market (at the time of writing).

The Fantastic Four comic was the first of the big Marvel creations by Stan Lee to kick off their silver age success story, all the way back in November 1961. In ’67 Hanna Barbera produced twenty episodes of their first animated series, which was similar to the Spider-Man show around that time.

As with so many other comic book superheroes the Fantastic Four 4 were first released by Mego in 1975, who were one of the biggest toy manufacturers in the 70’s are were commonly referred to as the “World’s Greatest Action figure company”.

Reed Richards is Mr Fantastic, a brilliant scientist who took a rocket into space only to find himself and his family pelted with cosmic rays. Rather than dying horribly they developed super powers. Reed’s abilities were to be able to stretch and contort his body, which usually entailed long arms and legs being wrapped around things.

However, the Mego figure just had the standard arms and legs, but that allowed kids to improvise with household items for their play. Some long strips of stretchy, blue material more than adequately doubled for his dynamic limbs.

Then there was Sue Storm (later known as Sue Richards, aka The Invisible Woman), who, as well as becoming impossible to see, had the power to become invisible, to generate force shields, and tactical force fields. Again the Mego figure didn’t feature these abilities but left it to the imaginative play of the children.

The tghird member of the team was Johnny Storm; AKA The Human Torch, who was the “hotshot” (get it?) brother of Sue and wore a flaming "onesie" costume, and lastly, there was Benjamin Grimm, the ever-lovin’ blue-eyed Thing who had a similar Mego baby-grow with a rocky pattern to represent his rough and tumble form.

These two were obviously the most fun of the Four, representing the quarrelling sons of their more mature and somewhat boring parents. Hence, they were featured more frequently as action figures over the years.

All the Mego FF4 figures had the same standard Mego body with Sue and Reed sporting the classic, blue FF4 jump suit. Boxed and loose versions of these guys all fetch decent prices, especially in great condition.
After the Mego figures were released, the second animated show hit TV screens, produced by DePatie-Freleng, the same production company behind The Pink Panther.

This was the show that removed Johnny Storm, the Human Torch from the line-ups out of a fear that children would see him onscreen and attempt to emulate him by setting themselves on fire!
His replacement was H.E.R.B.I.E. an annoying robot played by voiceover master Frank Welker.

The FF4 skipped over Mattel’s Secret Wars line, unlike many of their counterparts, but appeared in the Toy Biz Marvel Superheroes line of the early 90s which was the first non-Mego appearance of FF4 action figures. This set of four could be bought for $40 on eBay a few years after its release. 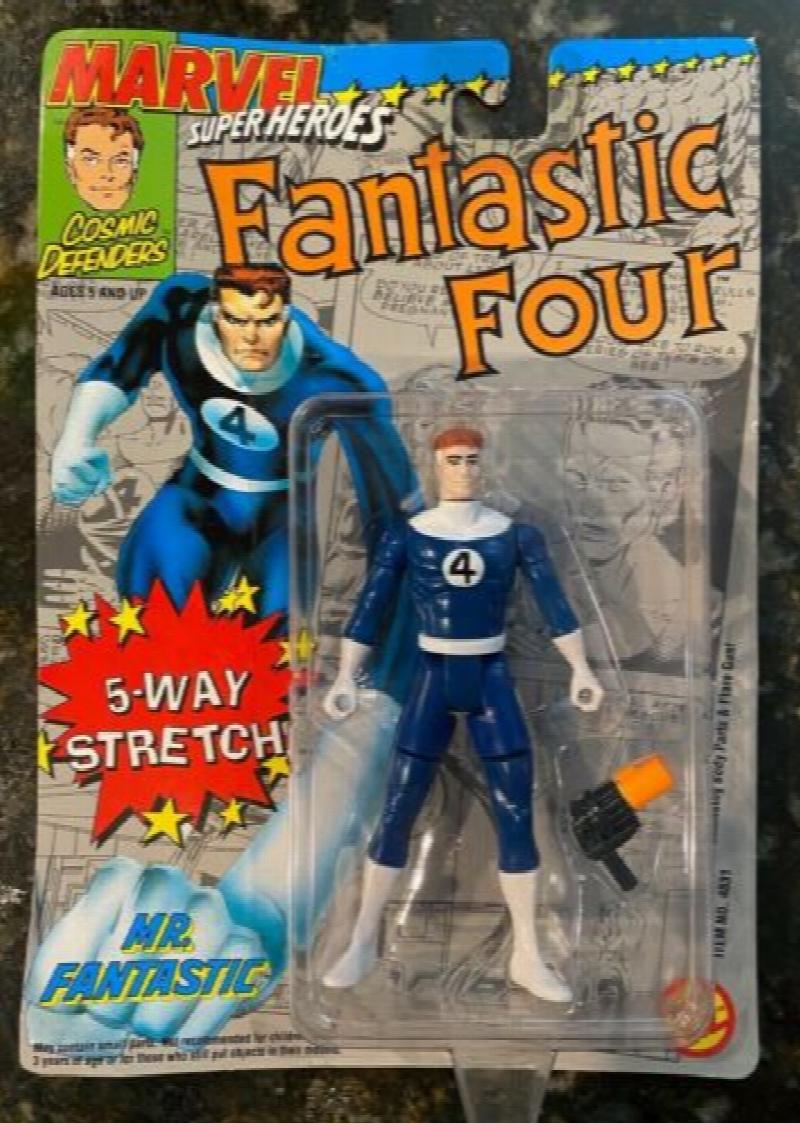 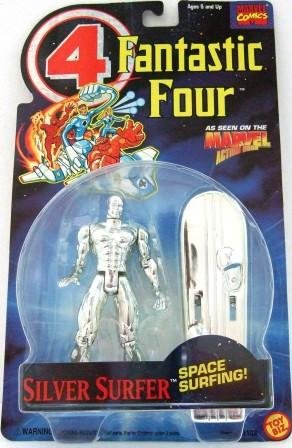 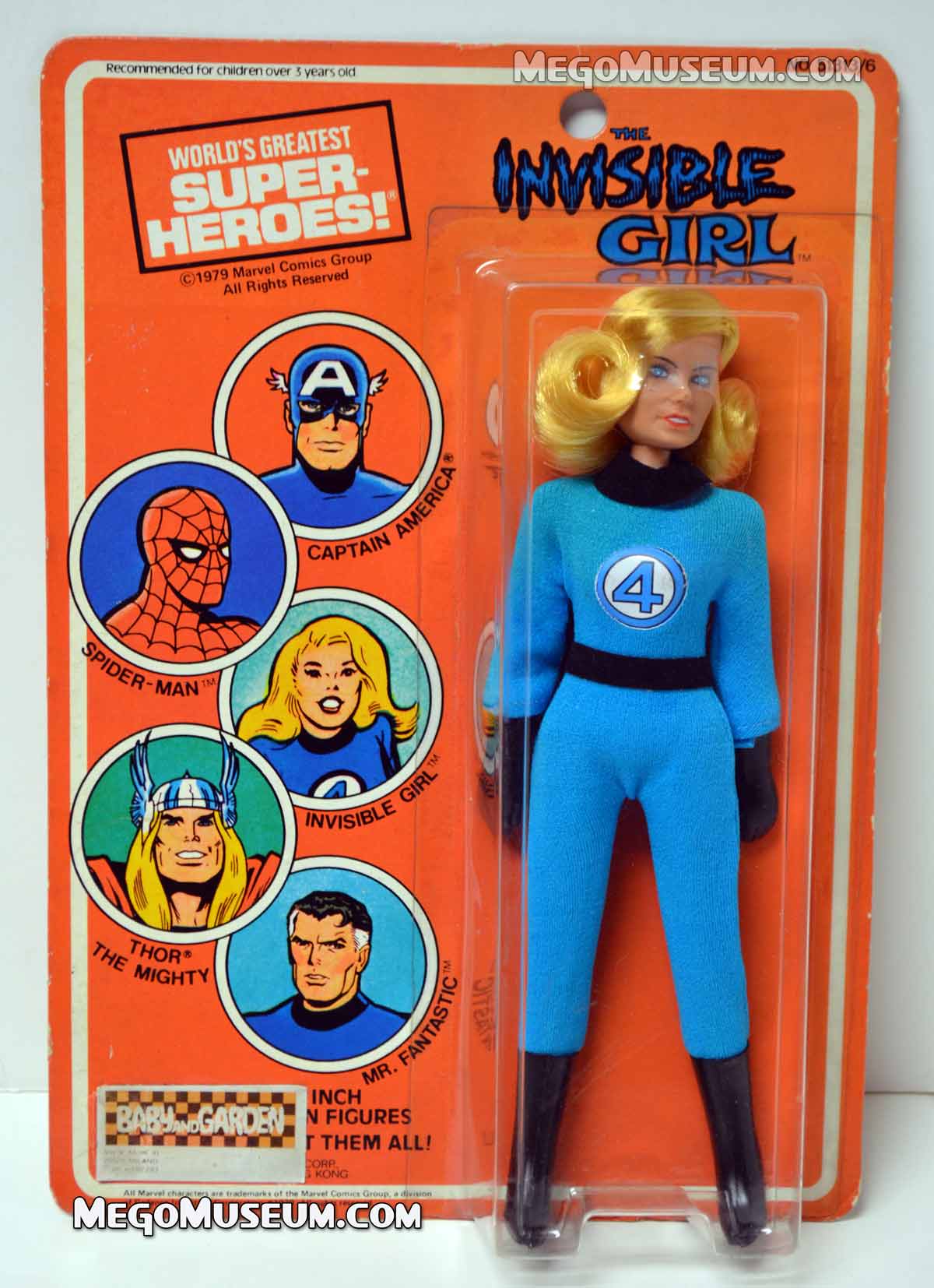 The Fantastic Four show was released during the 90s heyday of the animated Marvel universe alongside X-Men, Spider-Man, the Incredible Hulk, Iron Man and the Silver Surfer.
Toy Biz retained the licence from the earlier Superheroes line all the way up to 2007 so they became the most significant producer of Fantastic Four and Marvel figures to date, although Hasbro may have released more since by now.

One of the best aspects of the series was an abundance of new villains released for the family to fight with including Doctor Doom, Annihilus, Super Skrull, Wizard, Psycho Man and Attuma, to name a few.
There were also support heroes like Medusa and Prince Namor. These were all fairly soft and child-friendly figures with play features such as bendy, rubber arms for Reed. And who could forget their Fantasticar playset?

They were also included in the first Toy Biz line of Marvel Legends. The Thing appeared in the first wave with posable fingers and a variant in series 2 sporting a trench coat. Johnny Storm also turned up in Series 2 with a flaming display base and Reed appeared in series 5 with interchangeable arms. 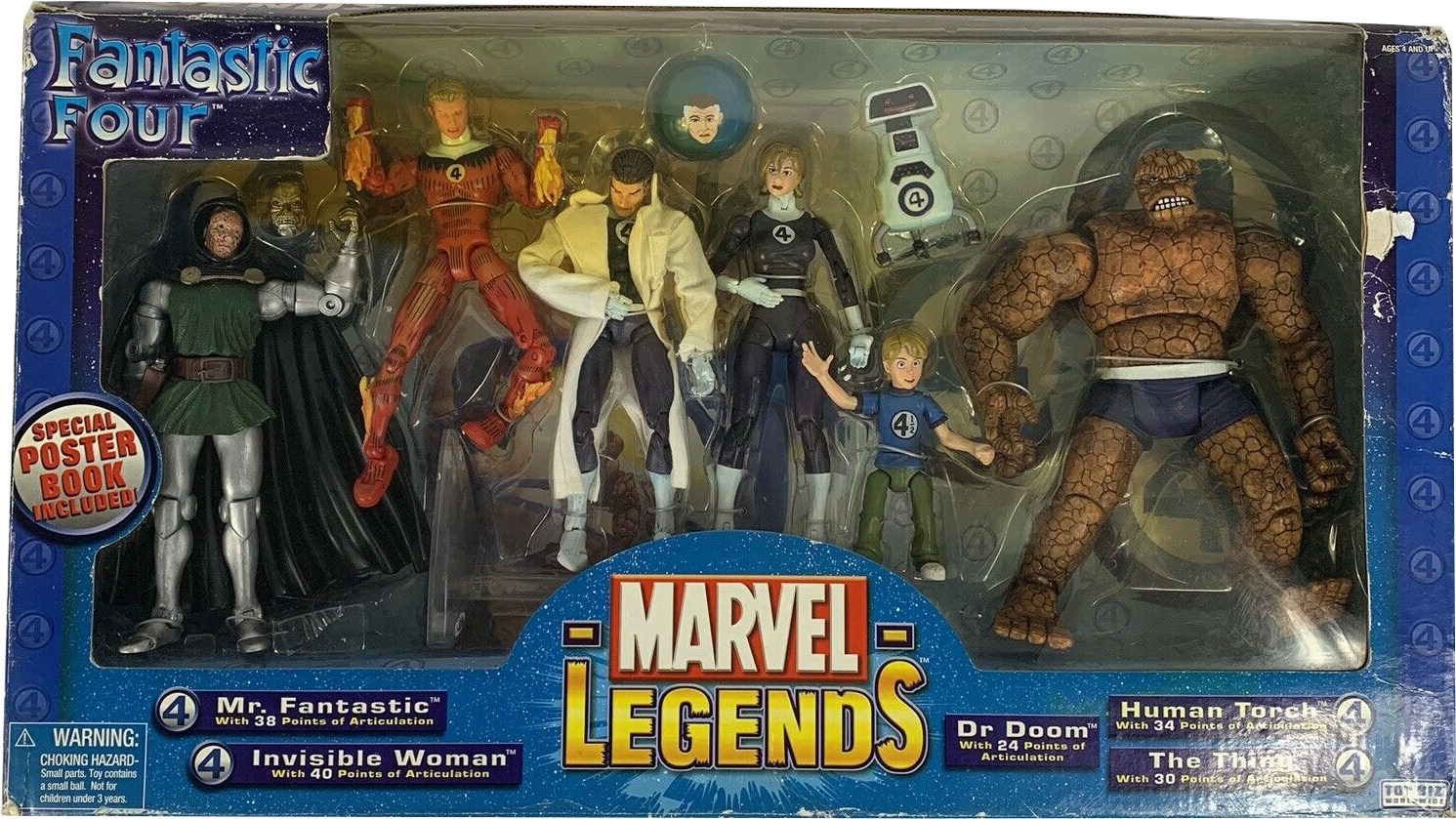 Notably Sue Storm… was invisible, in that there wasn’t a single version of her in this line. However, she did turn up in two different sets of variants with H.E.R.B.I.E. and Doom himself. and for the first time her son, a young and gifted Franklin Richards, a with Reed.

There was also a set paying homage to the disastrous Heroes Reborn comic series. These box sets all fetch decent prices on the secondary market, mainly because they are a rare chance to get all four of the Fantastic Four together.

Few people are aware that in 1994 a movie was made by Roger Corman, but official he movie was actually a contractual obligation made in order to retain the license and since they never legally had to release it, they didn’t!

Some might say the same fate should have befallen the first full theatrical movie released in 2005. In retrospect it’s not all that bad, it just doesn’t hold a candle to the soon to emerge Marvel Cinematic Universe films.

Either way it got a Toy line from Toy Biz, with all the figures based on their movie likenesses including a Chris Evans Johnny Storm. This line also included a neat slinky version of Mr Fantastic. The one that fetches the most on the secondary market is the impressively sculpted Doombot, which was of course not in the movie. 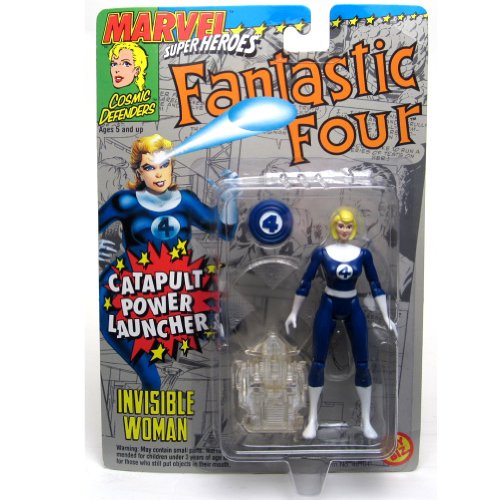 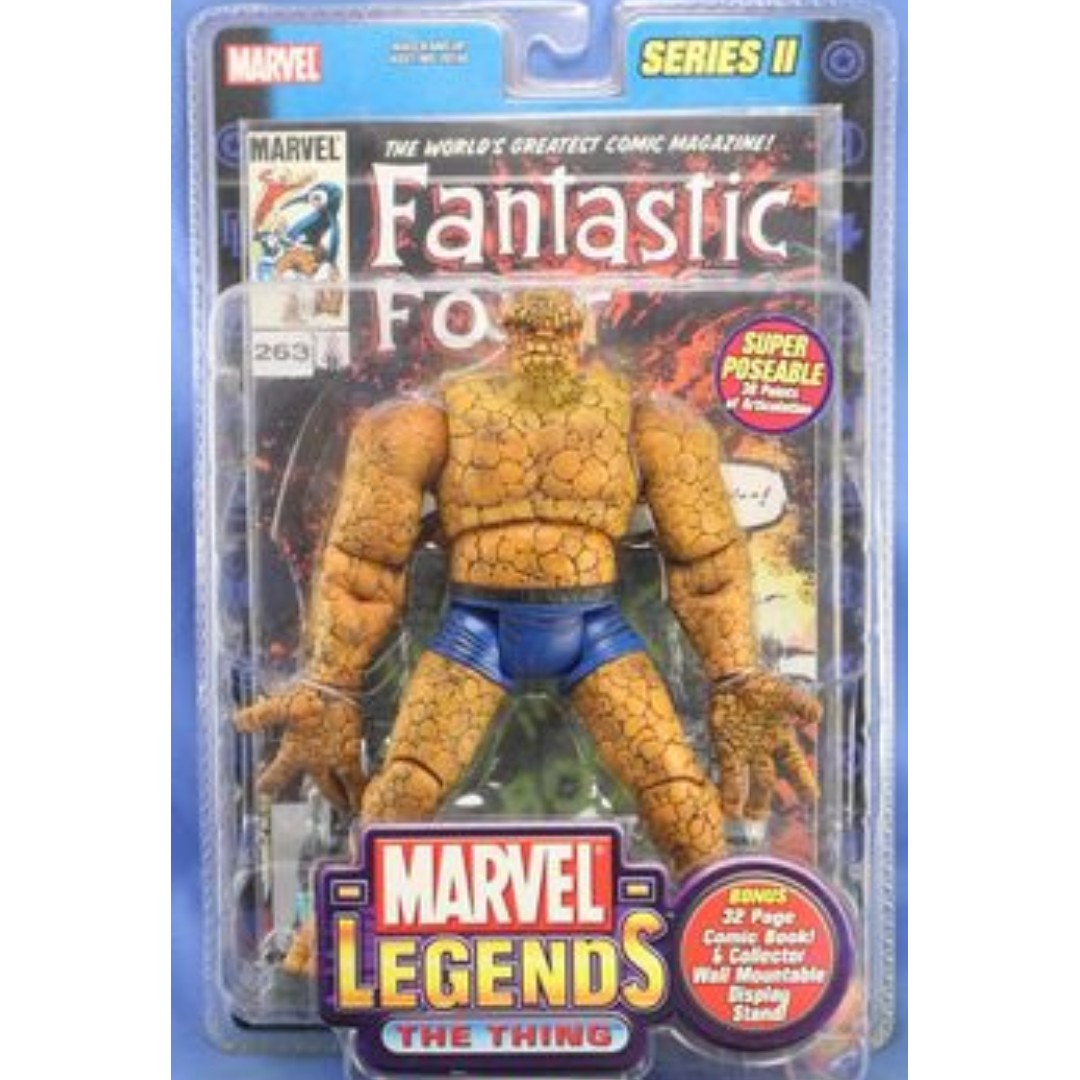 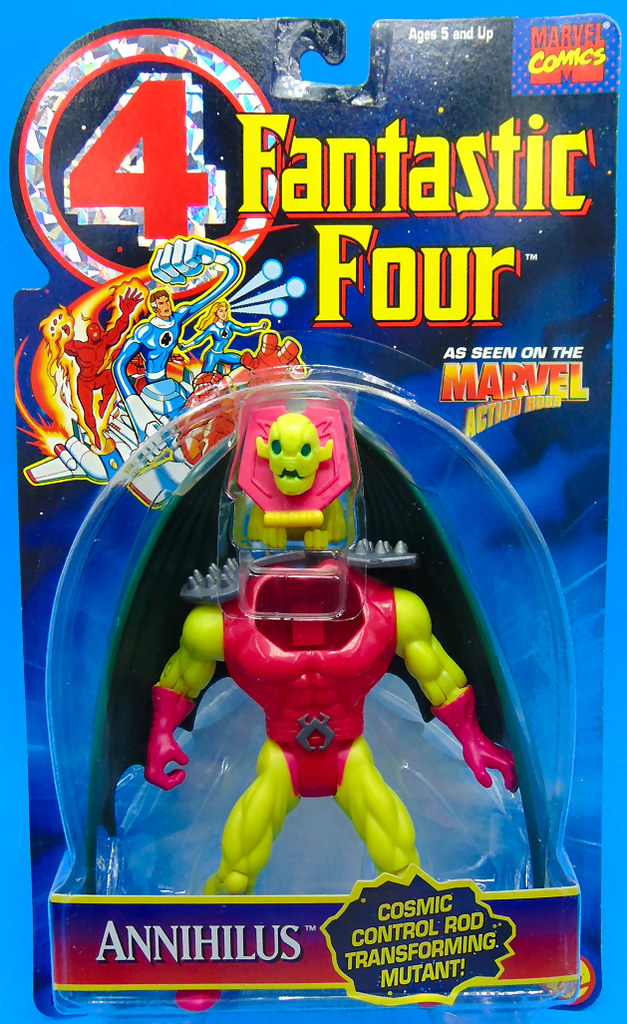 In 2006 there was a dedicated line of Fantastic Four Classics, again produced by Toy Biz in the same scale as Marvel Legends (similar to their X-Men Classics and Spider-Man Classics line). There were two waves, the first once again swapping Invisible Woman out for a colourful enemy, in this case Super Skrull.
Wave 2 featured Sue but not Reed, outlining once again the more interesting members of the team, Johnny and Ben, who appeared in pretty much every line. Also, Kang the Conqueror and Dragon Man, who are also the two most valuable on the secondary.

In 2006 a fourth animated series, the World’s Greatest Heroes reached TV screens. There were plans for a series of stylised figures with a fresh anime flavour but unfortunately this line was never actually released, which was a great shame.

In 2007 the Marvel license passed from Toy Biz to Hasbro so the next movie, Rise of the Silver Surfer had a corresponding line of Hasbro figures. 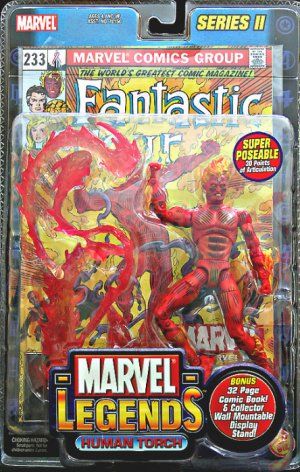 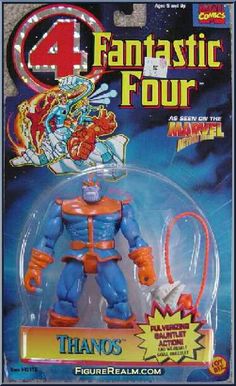 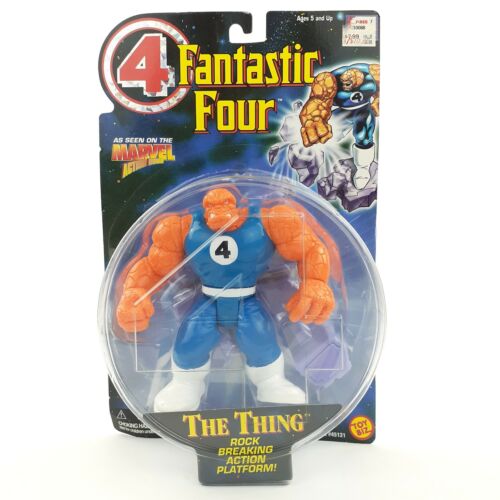 In addition, that October around the third series of their new Marvel Legends line there was a Wal-Mart exclusive all-Fantastic Four wave which has subsequently become a much sought-after set. The Build-A-Figure of Ronan is the crown jewel, but Sue Storm is also greatly prized.

It is, of course, important not to forget the other toys released over the years including the parachute toys in the ‘70s and several lines of Mini-mates from Diamond and a line of infant-focused Superhero Squad figurines.

More recently Hasbro has continued to release figures within their Marvel Legends and Marvel Universe lines, including a four-pack with the Human Torch once again swapped out for H.E.R.B.I.E.
And don’t forget both the She-Hulk and Spider-Man, among others, have been honorary members of the Fantastic Four over the years.

For many of us, it’s a case of waiting for Fox to relinquish their hold on the Fantastic Four license in cinemas so they can be re-incorporated into the MCU, at which point we’re going to get a lot more Marvel Legends figures that are liable to be insanely popular.

Could take several years, but it’s an eventuality that Marvel’s First Family will return home someday. 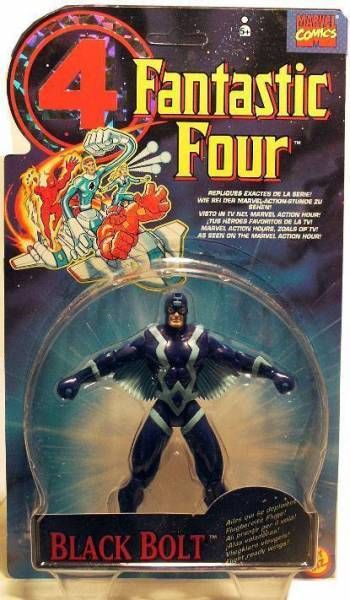 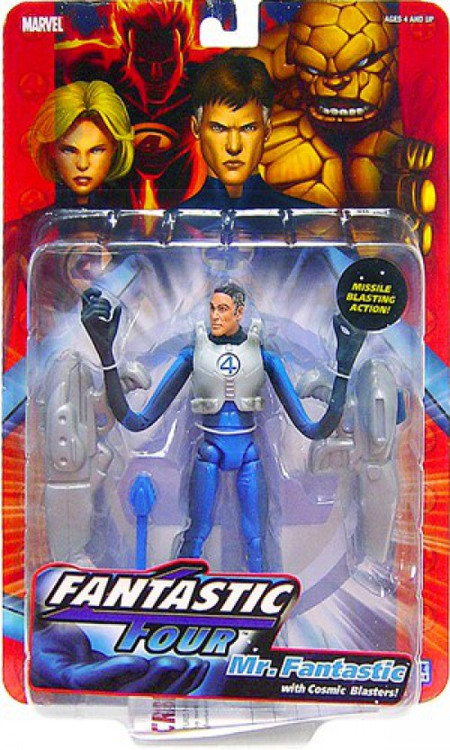 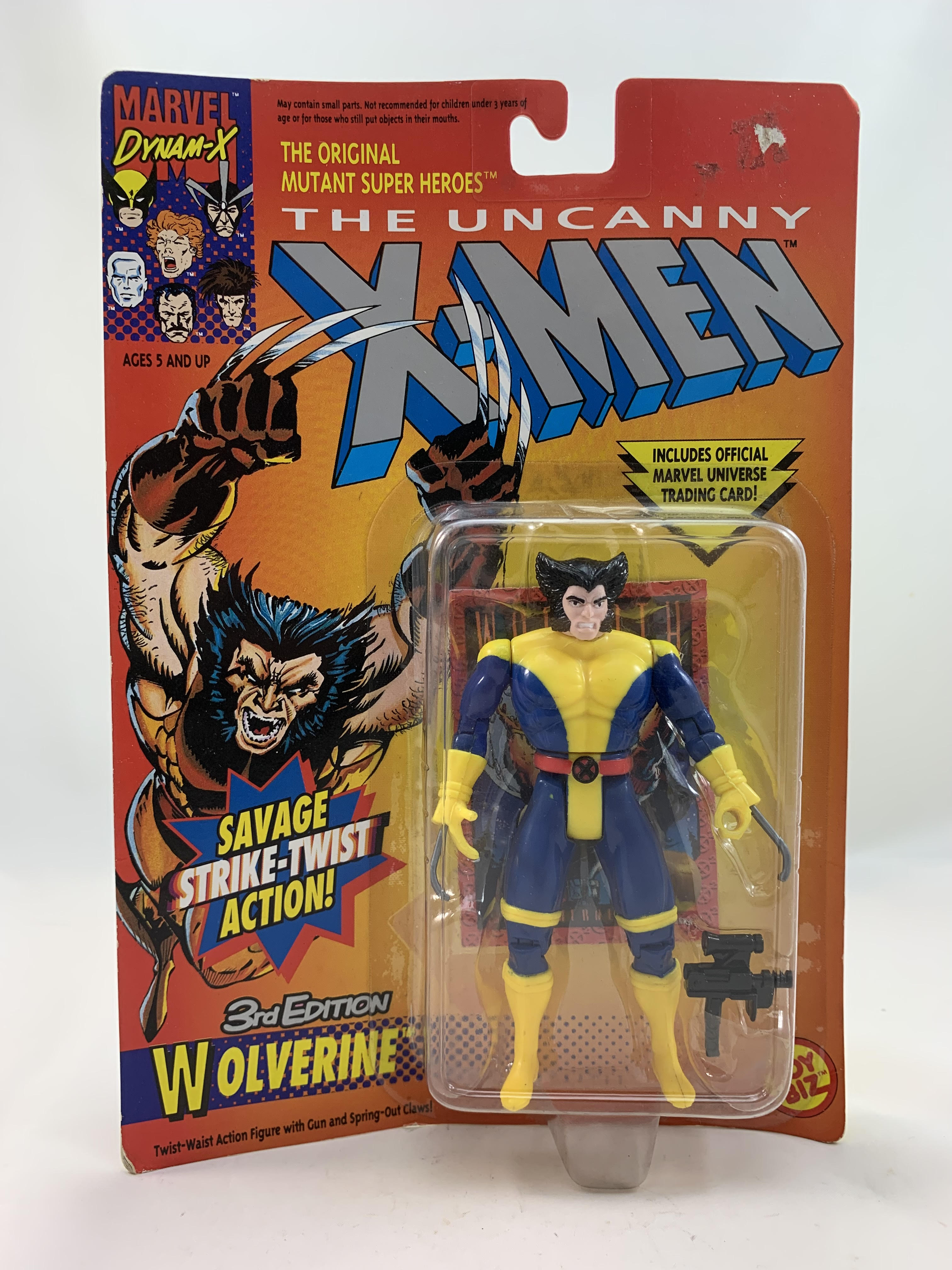 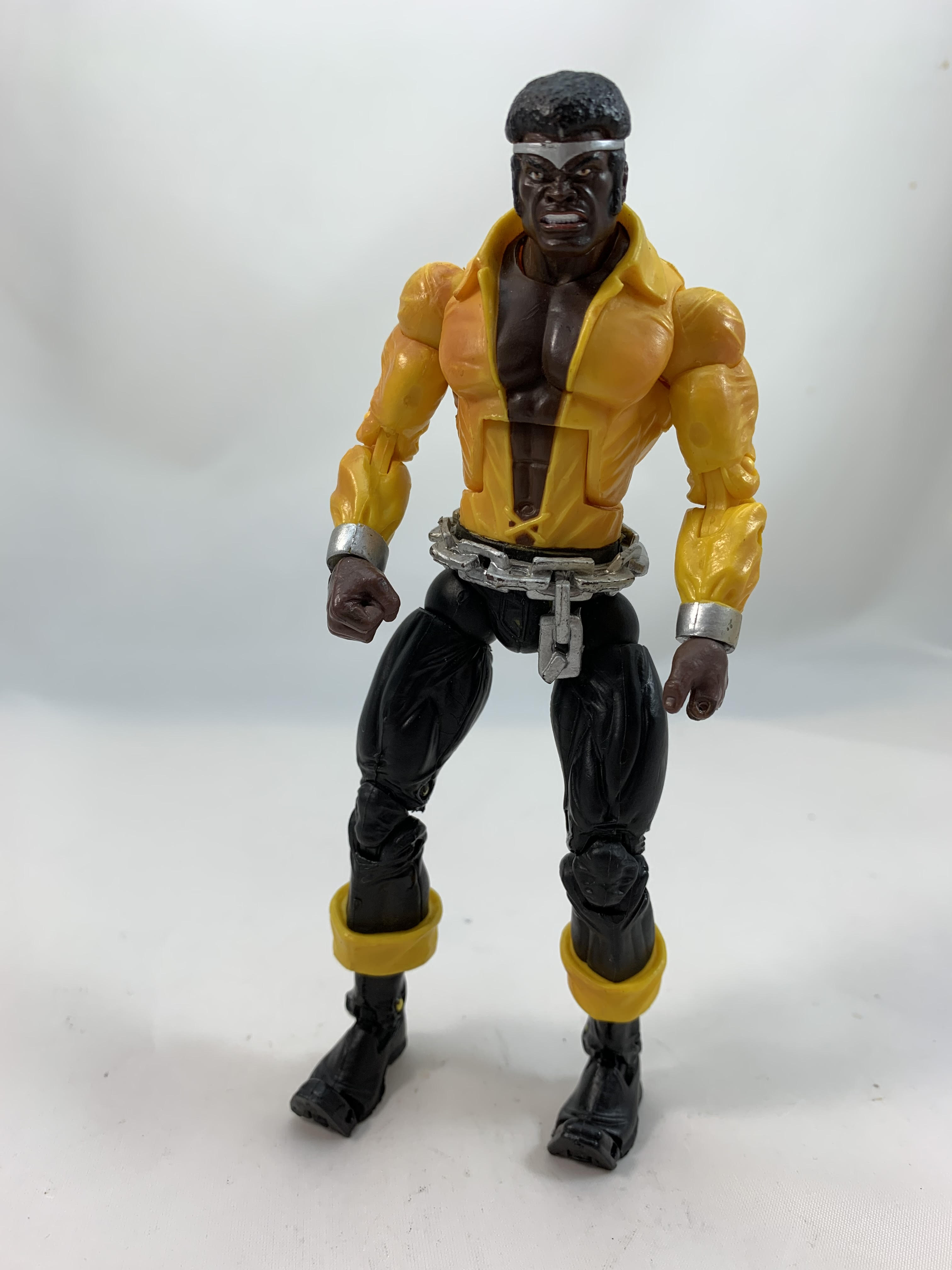 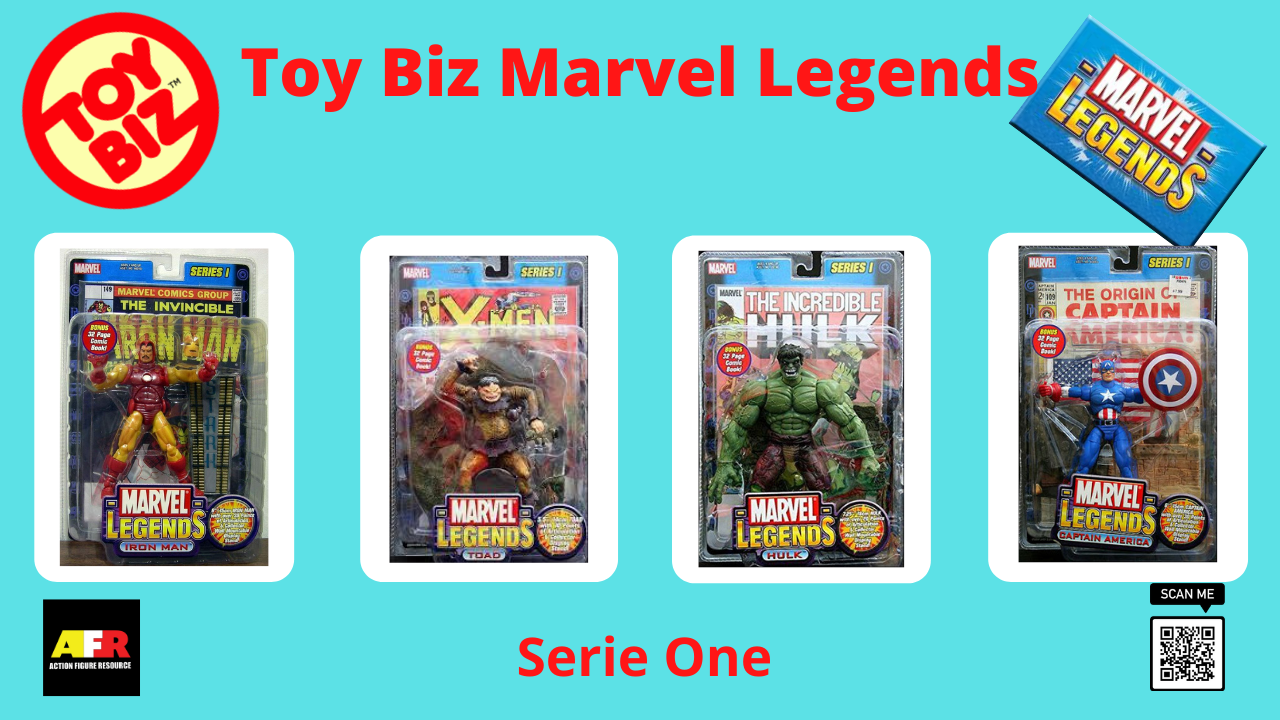 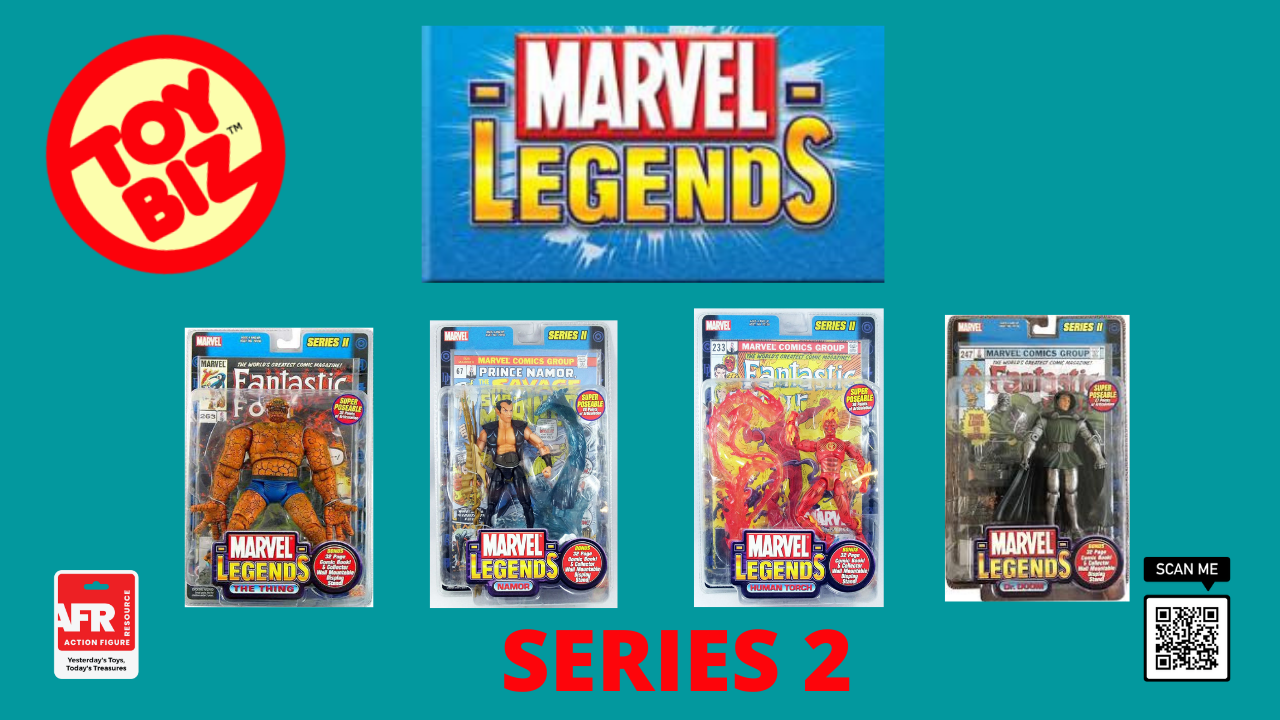