Was Superman the First Ever Action Figure?

For decades Hasbro have taken the credit for creating the very first action figure with their GI Joe line in 1964.

All Hasbro did was to coin the marketing term "Äction Figure" in order to make these "dolls"marketable to boys!

This was also the first official Superman figure ever released, and NOT the Mego figure as most peoples believe.

The Ideal Superman figure was released to coincide with DC's first big marketing campaign for the Super Hero just in time for the Christmas season sales.

Standing 13-inches in height, with limited articulation, the head and upper body were made of composition, i.e. a mixture of materials such as glue, sawdust, cornstarch, resin, and wood flour, while the arms, legs, and pelvis are wooden.

One of the biggest problems with these figures was that the composite was prone to cracking after time and therefore most of the examples of this figure still in circulation today have been restored to some degree.

However, as long as they have been restored professionally and accurately this shouldn’t defer its value.

Also this figure received a very limited production as this kind of articulated doll or toy was a fairly new concept, as a result it was generally sold in the big department stores in the larger cities and not the local high street store. 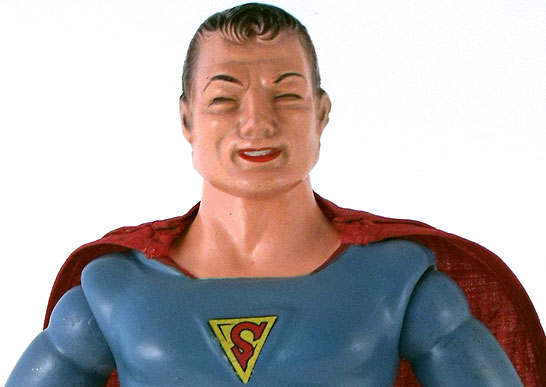 Collectors had to wait nearly 30 years for another  Superman figure to be released, again by the Ideal Toy Company, in the shape of a Superman version of the popular Captain Action figure.

Captain Action was a generic figure released by the Ideal Toy Company to compete against the popular Habro GI Joe figure. Ideal also released a Superboy version of the Action Boy figure.