Kenner were first approached by Pat McInally in 1986 about producing NBA Basketball Action Figures. Pat McInally, a veteran of the Cincinnati Bengals American Football team, was preparing to move to the West Coast after retiring from football that he met a newly appointed Kenner executive whose job was developing toys for kids. As it happened, Pat had a regular syndicated newspaper column “Pat Answers for Kids” and so he was asked by the Kenner exec if he had any ideas.

Initially Pat came up with the idea of 3D cards but Kenner weren’t keen on the idea. Then while he was browsing through the toy aisles of a local store it suddenly occurred to him.
There on the toy shelves were rows and rows of toys featuring all kinds of super-heroes, but there wasn’t a single toy based on the real world heroes of sport.
Nothing much happened after that until he had completed his move to California, but finally arrangements were made for him to make his presentation to Kenner in Cincinnati.
On his way Pat stopped by a local toy store to pick up a pack of baseball cards and armed with these and one of Kenner’s current action figures he was ready to make his proposal.

Pat however was not expecting quite the reaction he got. After two hours of discussions Kenner’s reaction was overwhelming, but how were they to get the licensing rights?
Luckily Pat proved to be the key mover here as well with his vast experiences in the NFL and his contacts in the sports arena and so within a week he had commitments in hand for all the 3 major U.S sporting Leagues and so the Starting Lineup brand was born.
This was the first time that all the major sporting leagues were represented under one brand and in 1998 the NHL league also joined the others.

The first of these Sport figures were released in 1988 much to the delight of fans and collectors. The Kenner Starting Lineup figures gained a large following of loyal collectors and became a huge hit (the SLU club still has approx 40,000 active members!). Generally these figures were approx 4-inches in height although occasionally "special" event figures up to 14-inches in height were produced. Looking back now it's hard to see what the attraction was in these rather crude "action figures" that often had little resemblance to the actual players, which is probably why the SLU trading card was included ;-).But at the time they were all we had and they were FUN! 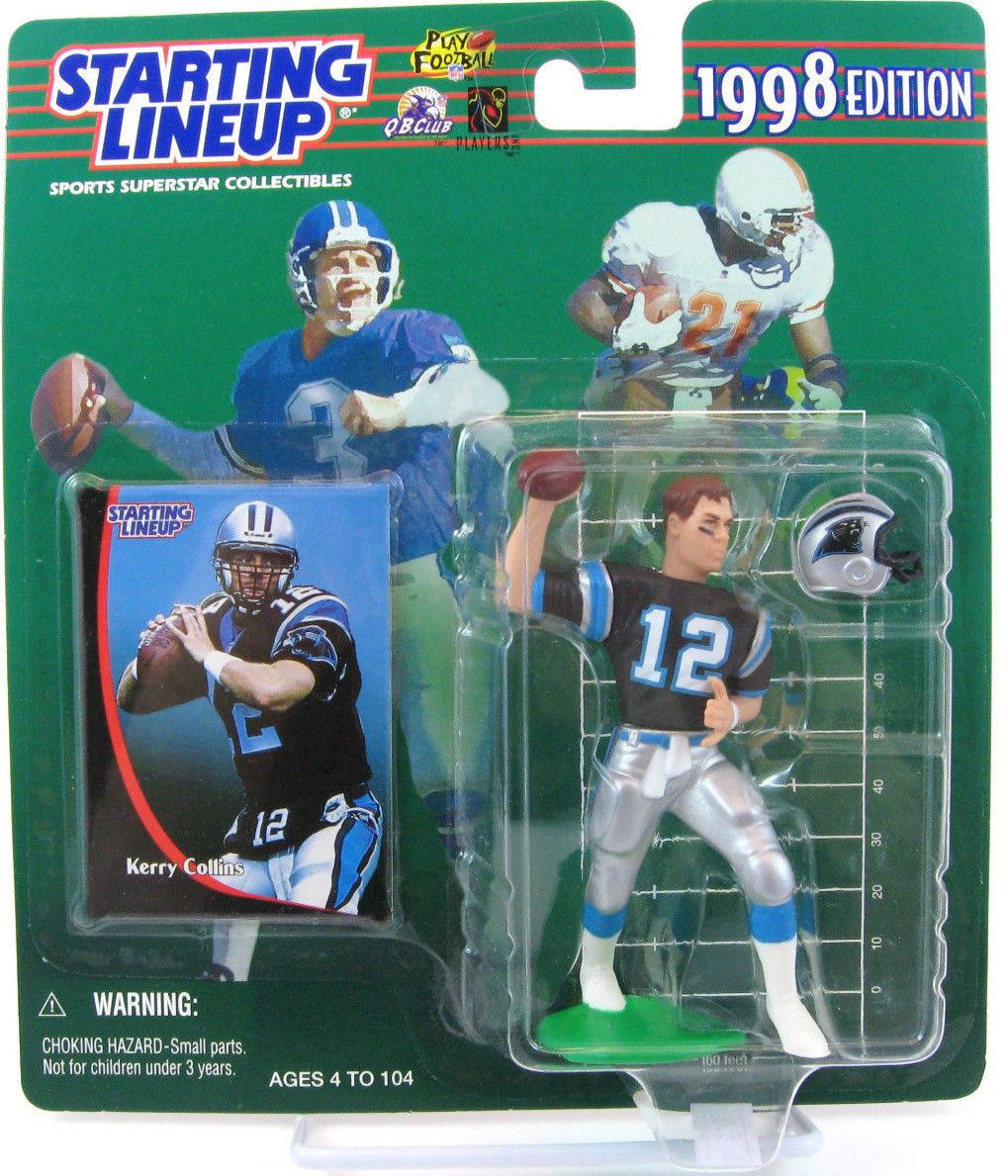 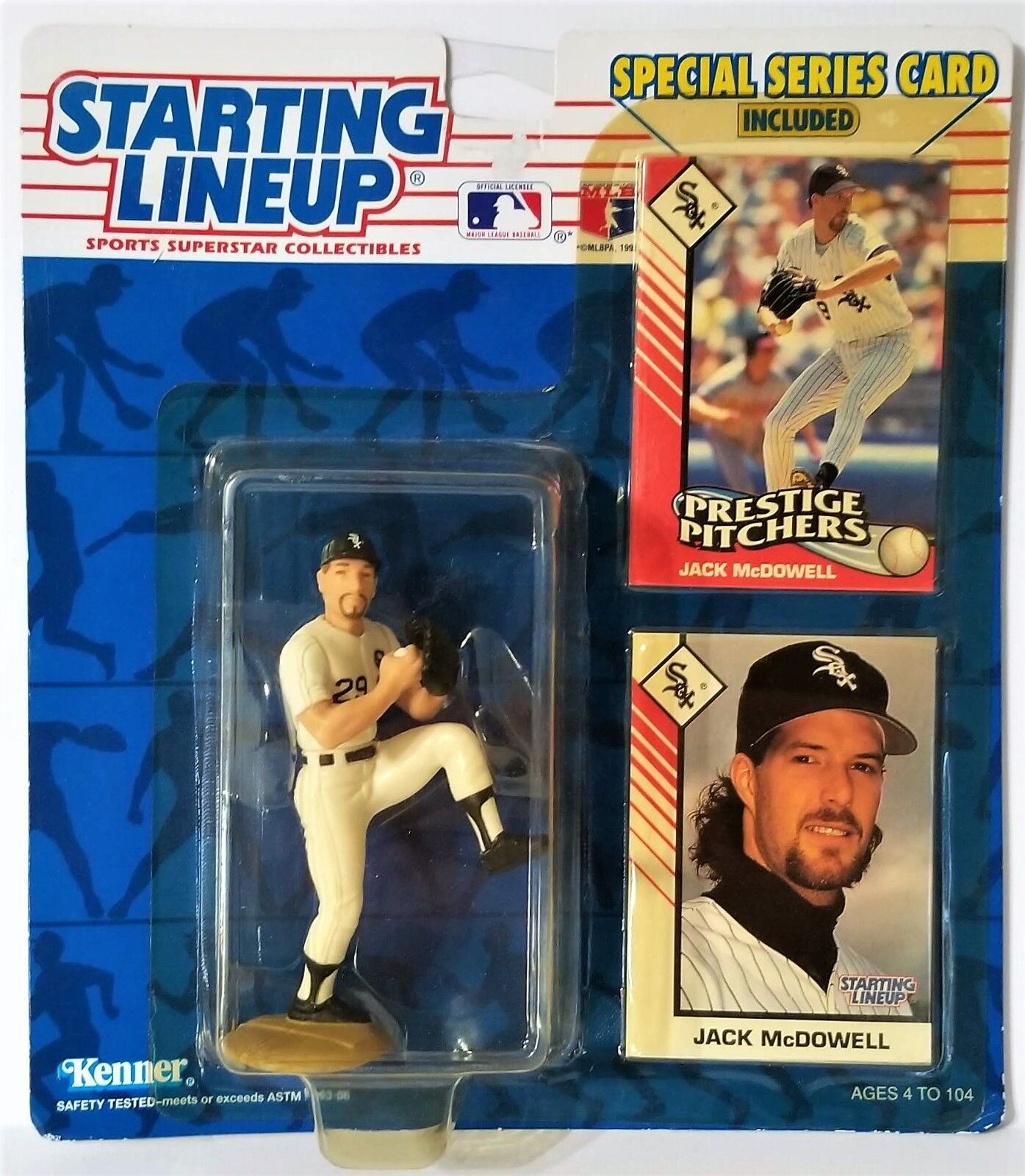 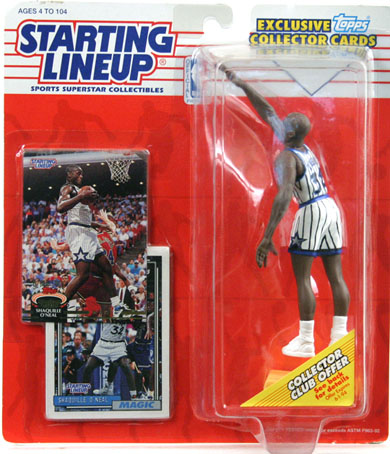 Unlike the figures that you can buy today the Kenner NBA Basketball Starting Lineup Action Figures only had a very crude likeness of the stars they were supposed to be of, but at the time they were all that was available and they filled a gap in the market.

The figures were 4-inches in height and were articulated at the neck, shoulders and waist with a base that resembled a basketball court. These figures also came with a trading card of the player.

This caused Kenner to completely re-think their marketing strategy and as a result they dramatically increased the number of figures produced in each series, making them easier to collect yet at the same time adding smaller production runs of "variant" figures, thus unintentionally introducing the concept of the "chase" or "variant" figure into the hobby.

But, like many companies before them and since, they overestimated the market and began to over produce the NBA Basketball Action Figures, causing a glut in the market and many stores to started "dumping" them, which in turn led to the market being undermined and saturated with cheap figures.

The end result was that in 1998 Kenner, which had by then become a Hasbro subsidiary, lost the license to produce NBA figures to Mattel Inc.

Prices for the Kenner NBA Basketball Starting Lineup Action Figures can vary from a few $'s for unboxed standard figures to 100's of dollars, or more for some of the rarer and more popular figures, generally from the earlier vintage figures.

As a general rule, if the figure is sealed in its original packaging it will be worth a lot more than the loose figure, in fact loose Starting Lineup figures generally only go for a few $$'s.

However, lately there appears to be an increase in figure popularity on eBay. The SLU collectors that have remained have started looking for challenges - namely 1988 and 1989 figures that were produces in low quantities for local markets.

And now that we grade EVERYTHING, it’s become commonplace to pay a premium for graded. According to the Sports Figure Market Report in the April 2007 issue of Tuff Stuff Magazine, the following graded figures sold for big bucks: 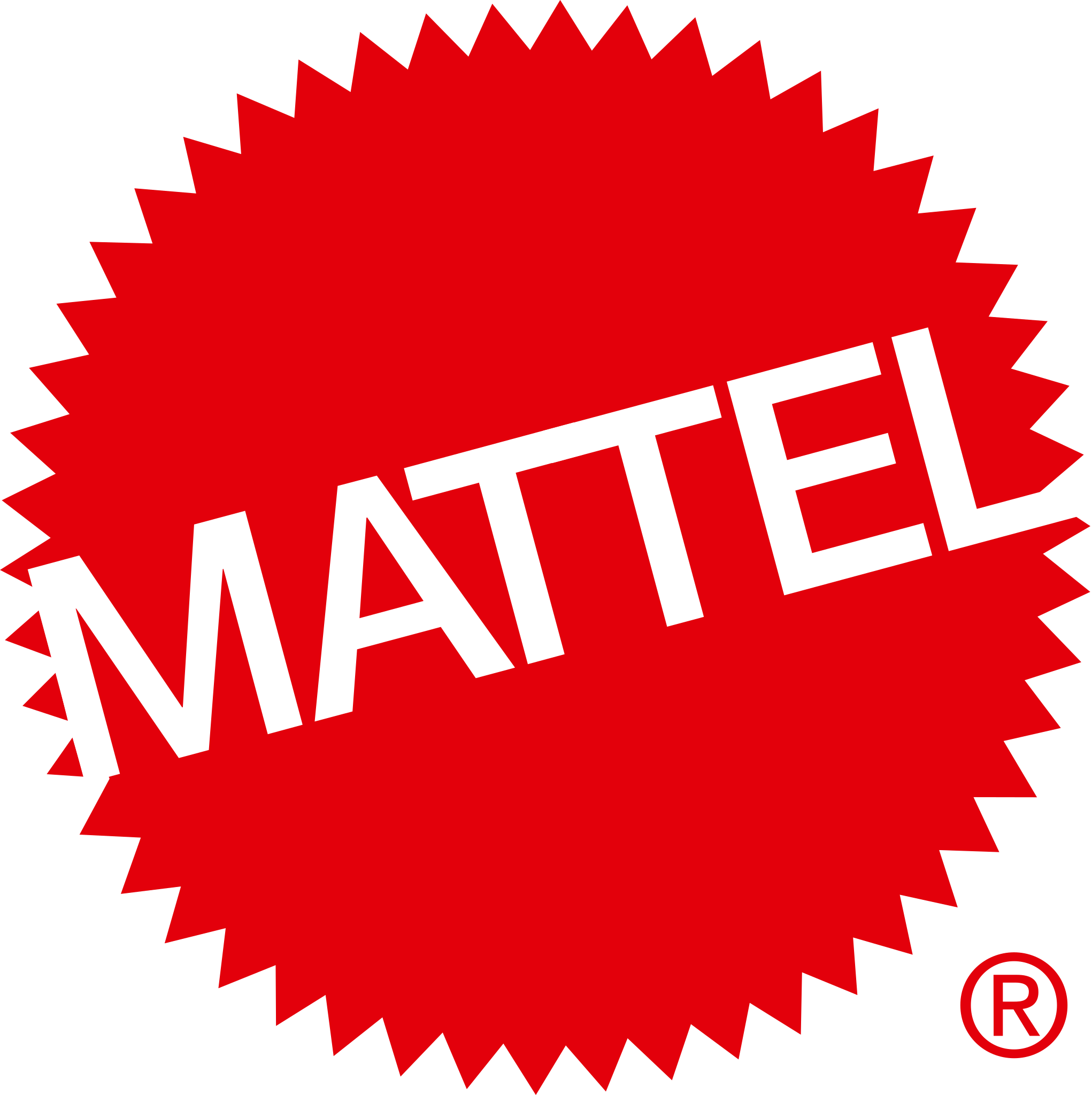 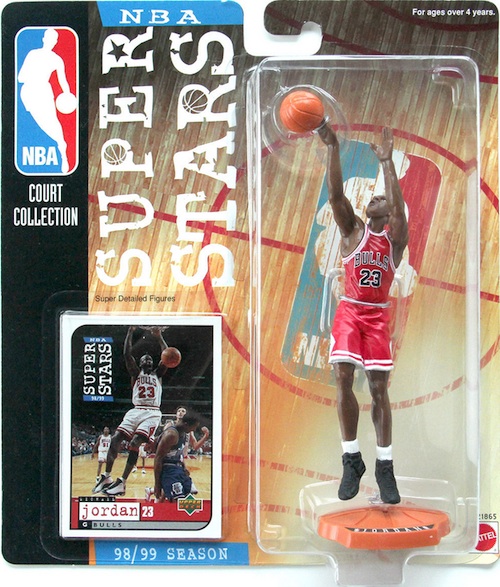 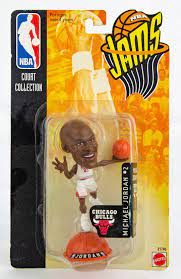 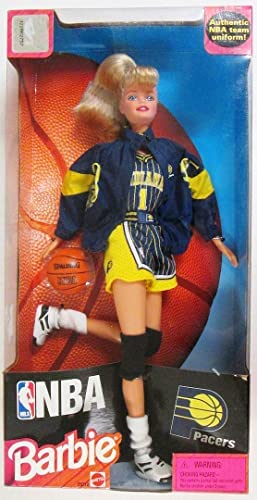 Mattel's deal however came at a difficult time for the NBA who faced the retirement of superstar Michael Jordan at the end of this season.

Also the behavior of many players both on and off the court was souring the games name and fans were beginning to get bored of their high demands, pay increases and attitudes.

Many of the games sponsors where considering pulling out of licensing deals due to these concerns.

Expectations were high at the time and Mattel planned to use the NBA logos in its Cabbage Patch dolls and Hot Wheels as well as the Mattel NBA Basketball Action Figures in order to encourage a greater range of buyers.

The NBA also had high expectations of Mattel's ability to "really get behind us because this is their only major sports licensing deal", as an NBA spokeswoman was quoted saying.

Mattel released a series of basketball figures with the NBA license including:

The first sets of Mattel NBA Basketball Action Figures released in 1998, were the NBA Jam basketball figures which were small 3-inch figures with oversized heads similar to the Corinthian Headliners. Then in 1999 they released a larger 7-inch version of Ultra Jam figures.

Mattel also released a series of NBA Superstar basketball figures. These figures were 6-inches in height and resembled the players and like the earlier Kenner Starting Lineup figures each one came with a trading card from Upper Deck.

Mattel also released a line of 13-inch NBA Shooting Sensations "dolls" which were produced in 1999 and were a Barbie style doll aimed at trying to attract more girls into the "sport". 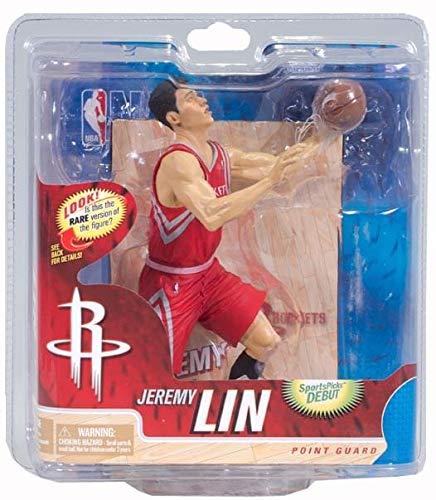 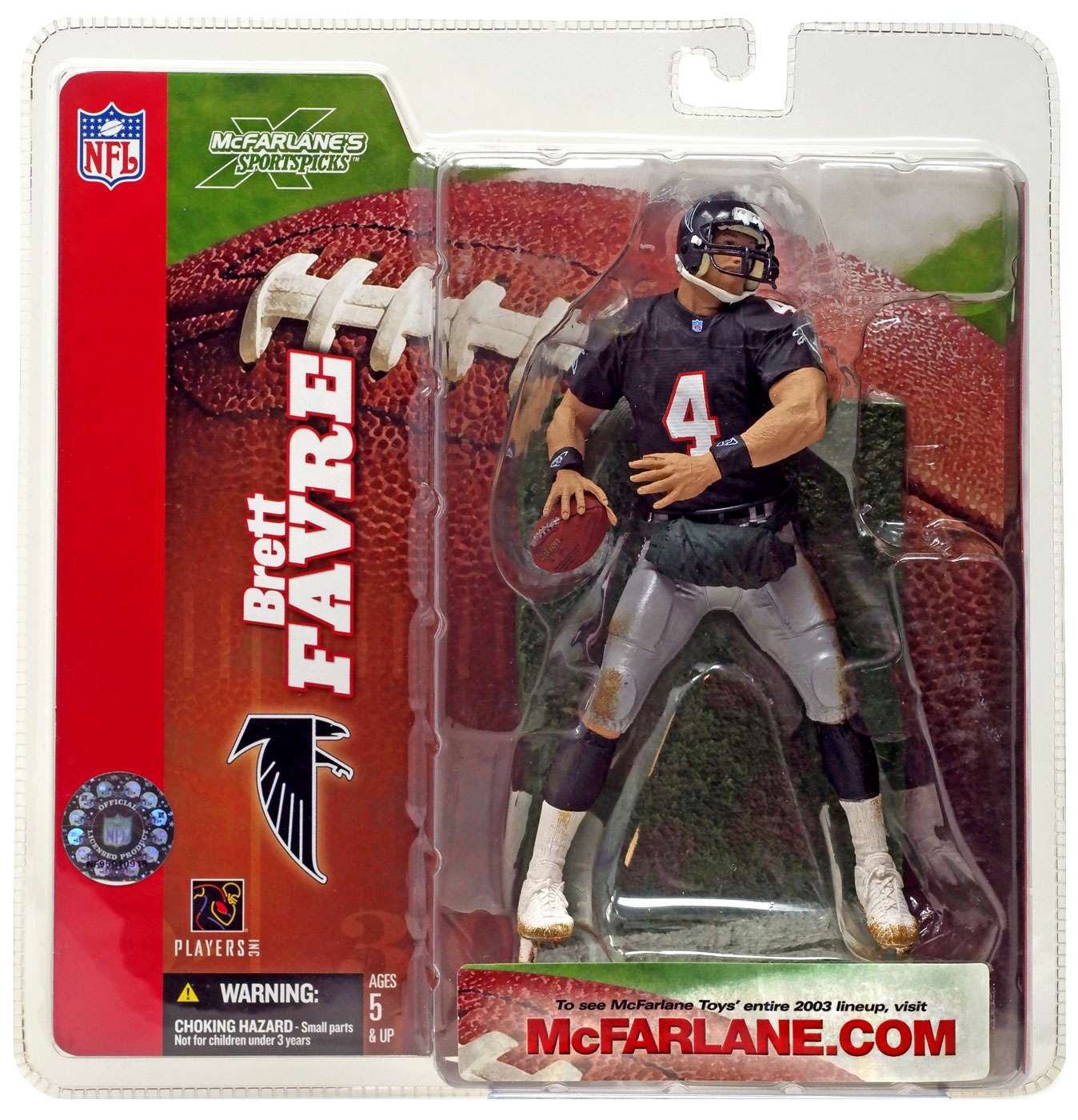 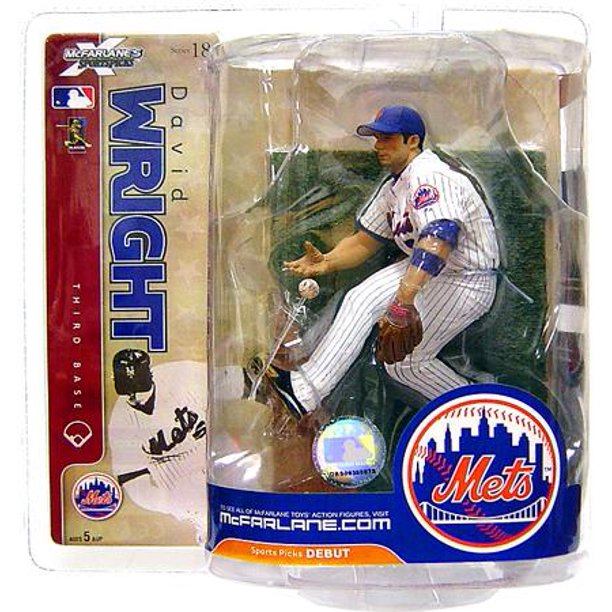 On November 19 2001 McFarlane Toys announced that they had been granted the exclusive license to produce NBA basketball figures.

Bringing an incredible new level of detail to the NBA figures and representing some of the NBA's leading players each of their basketball figures features official team logos and colors, and come with authentic game apparel specific to that player
McFarlane raised the bar yet again with these figures proving that a high end quality product could be produced for a reasonable retail price. Much to the delight of the fans and collectors.

There are three different "brands" that come under the NBA Sports Picks umbrella:

McFarlane's Toys NBA Basketball Action Figures Basic Series: Each season there is generally one basic series of basketball action figures released based on the top players and/or rookies of that season.

McFarlane's Toys NBA Basketball Action Figures Legends: The Legends series highlights those players who have achieved a high level of success within the NBA or have entered the Basketball Hall of Fame. This series represents the "Best of the Best".

Many collectors prefer to leave their figures in their packaging as an "investment" but generally I like to take mine out of the packaging and allow them to "breathe" and displayed as intended.

In recent years there has been a big debate on how much "articulation", i.e. moving parts, there should be as the trend since the 90's has been to keep articulation to a minimum, with usually 5-6 joints, but companies such as Hot Toys seem to be bucking this trend and pushing the "art" of articulation to its limits with some figures having as many as 30-40 joints. It also seems that collectors are also starting to demand more articulation on their figures.

However, the market seems to be split between the MIB collectors and "fun" collectors. MIB collectors (Mint In the Box) aren't generally concerned about the articulation because they rarely remove their figures from the original packaging whereas your fun collector likes to change their figures pose, display them and even play with them!

Each series of these figures also included Chase and Variant figures which were randomly inserted into cases of the figures sent to retailers. The most recent addition to this line was the Collectors Level figures.

Collectors Level: These figures are limited edition figures that are variants of the standard figures. Some of these figures will have alternative jerseys whereas others have base variations, trophies, awards, or even authentic player signatures, original or replica sports memorabilia etc.

Each of the Collectors Level figures are sequentially numbered, with the players' last name and the series name on the base for authenticity.

All in all McFarlane have created an excellent line of high quality, well produced and professionally sculpted basketball action figures that have captured the hearts and minds of fans and collectors alike and look likely to continue to do so for the foreseeable future.