As sales of sport trading cards continue to drop alarmingly sales of NFL action figures continues to grow despite the current economic crisis. There are several reasons for this switch in attitude as the hobby becomes more popular among fans.

Trading cards and autographs of the top NFL players have always been popular collectibles but it is only since about the late 1980’s and mid 1990’s that the hobby of NFL action figures has become both acceptable and popular among fans.

But where did it all begin?

Johnny Hero was THE very first of the American Football NFL action figures. In fact he is the granddaddy of ALL sports figures, although many may refute his claim to being the first.

Because technically he was a generic action figure and not just a Football figure.

Johnny Hero was produced by Rosko Industries, of New York, only a year after Hasbro's G.I. Joe was released and came packaged in a cardboard box featuring a track and field runner dressed in silk track shorts and a short-sleeved shirt with trim (piping but Rosko Industries also produced 22 NFL team kits for him.

Many believe he was "born" before his time but whatever the reason for his demise many collectors and fans still fondly remember the hours of fun he provided.

Since then he has largely been neglected and forgotten by many in the collecting community but now it's time he claimed his rightful place in the history books of the hobby. 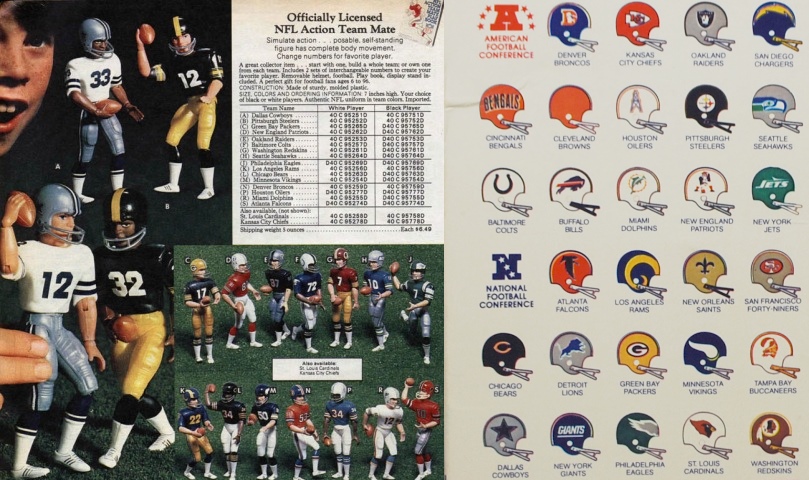 An often neglected and forgotten series of NFL Football figures are the Pro Sports Marketing Action Team Mates football figures which were a forerunner to the popular Starting Line-up figures.

They were approximately 7.5 inch in height and were very crude compared to today's standards and had limited articulation consisting of movable limbs held together by elastic (rubber) bands, much like the early G.I. Joe and Action Man figures, but they remain popular with collectors mainly due to the fact that they weren't widely distributed and are quite a rarity as they were only available through Sears and J.C. Penny's toy catalogs.

All 28 teams were available in the "Action Team Mates" football figures that were first in 1977
The Action Team Mates came with a removable helmet, interchangeable numbers, a playbook, display stand, and football.

Want to check if you have an authentic Action Team Mates figure?
Then check the right leg of your figure as they were marked with the year they were manufactured and P.S.M.I. 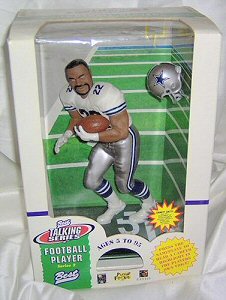 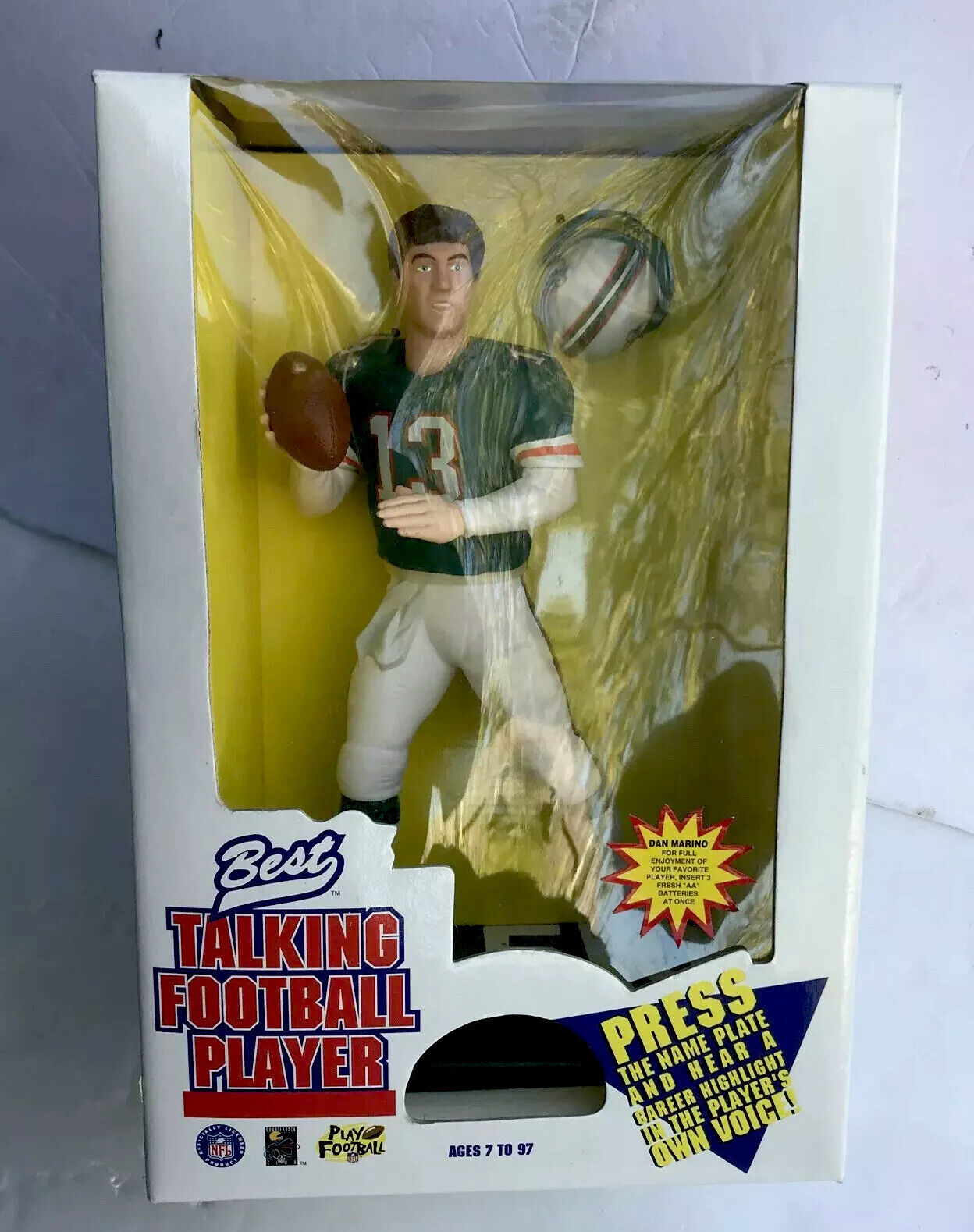 Between 1996 and 97 the Best Card Company of Douglasville, Georgia, produced two series of pro football figures and one series of 12 college figures which were released as the Best Talking Football line and the Heroes of the Gridiron.

The Talking Football figures were approximately 11" tall and had battery-powered bases. These bases had a push button which when used made the athlete talk about a favorite moment in his career.

The Heroes of the Gridiron by contrast were geared more towards the collectors market. These figures were approx. 6.5-inches in height and were fully articulated. Each figure also featured a removable helmet. This series was advertised as having 12 figures but a 13th Brett Favre figure was also produced.
All these figures were licensed by the NFL and the Player's Association. 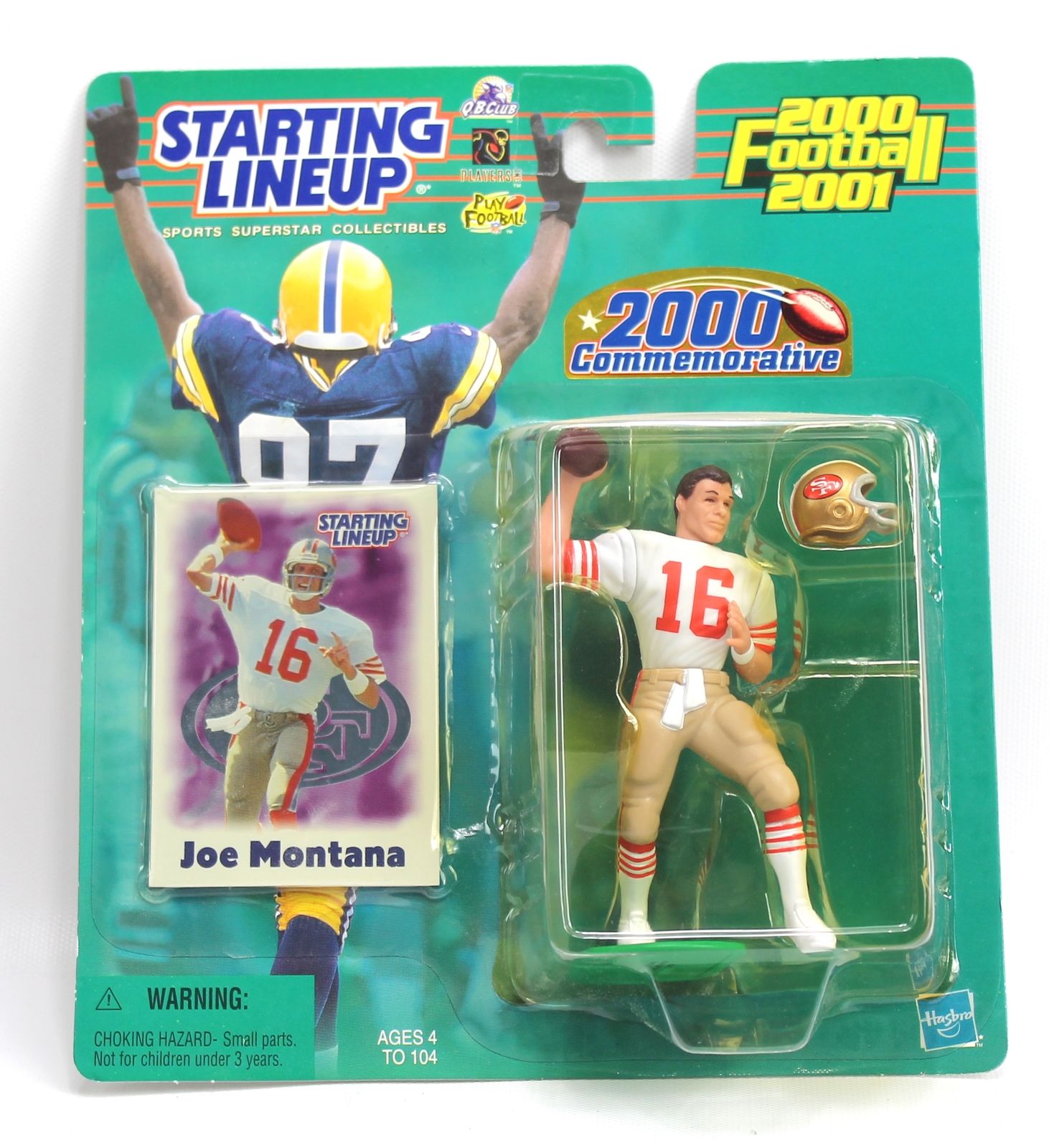 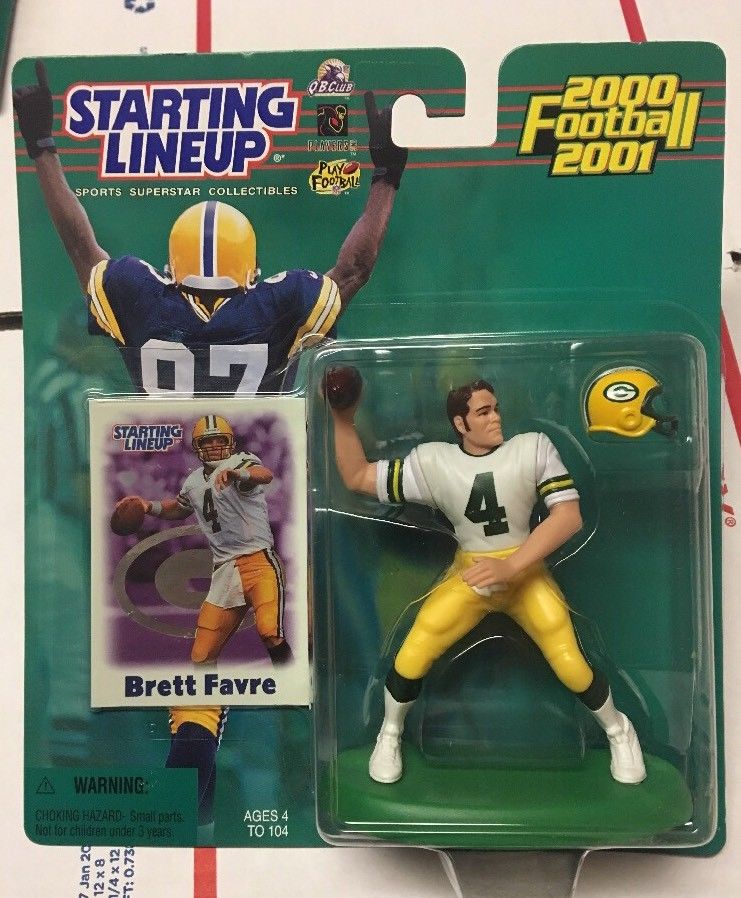 In 1986 a Cincinnati Bengals American Football team veteran by the name of the Pat McInally, was preparing to move to the West Coast after retiring when he met a newly appointed Kenner executive whose job was developing toys for kids.

So, armed with a pack of baseball cards and one of Kenner's current action figures he was ready to make his proposal.

However, the reaction he got wasn’t quite what he expected. After two hours of discussions Kenner's reaction was overwhelmingly positive.

The Football figures were made from hard plastic, were 4-inches in height, and painted to resemble a footballer, although the "resemblance" was often questionable, but there was a limited number of poses for a figure, initially 10 for each sport but in 1993 and then again in 1995 Kenner introduced a number of new poses. 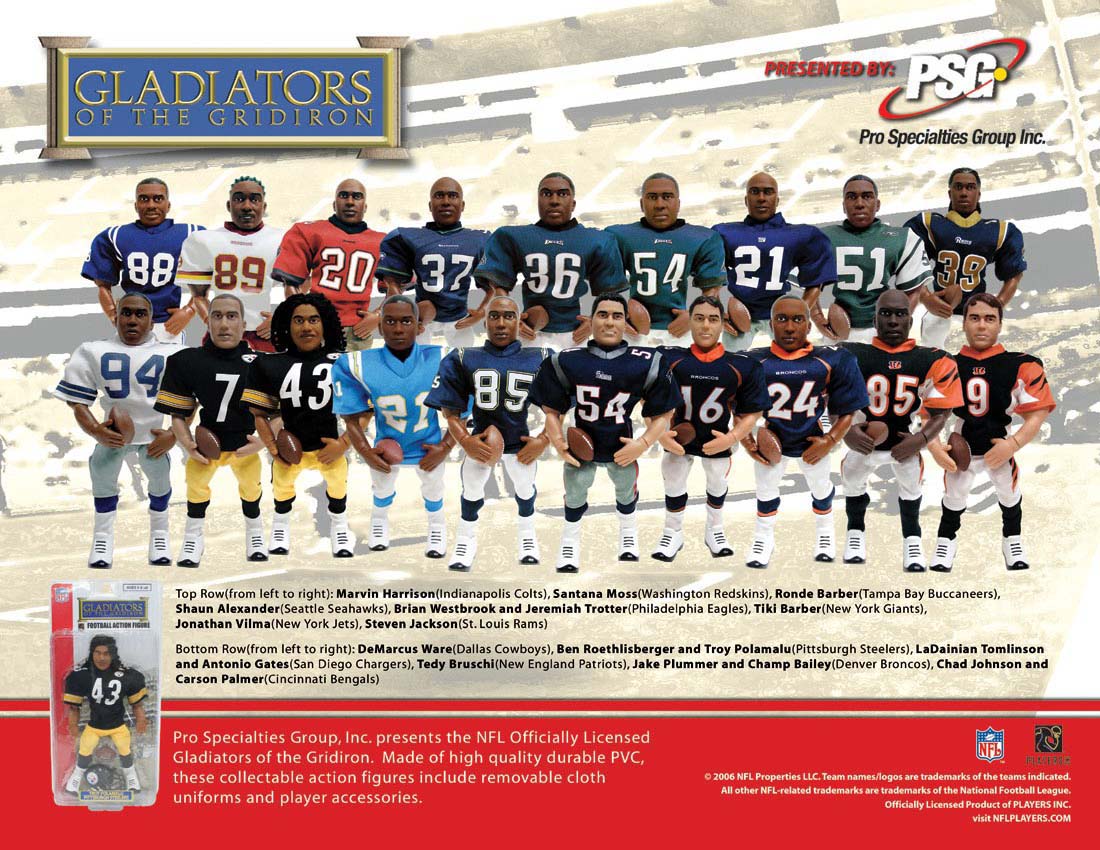 These 9" tall figures were made of PVC with articulation on the arms, legs, elbows and wrists. Unlike other figures the Gladiators of the Gridiron are also dressed in authentic uniforms with removable shoulder pads carrying the appropriate NFL Team logo as well as a football and helmet.
Produced since 2004 there are now several series of figures available with many of the NFL’s to players being featured. 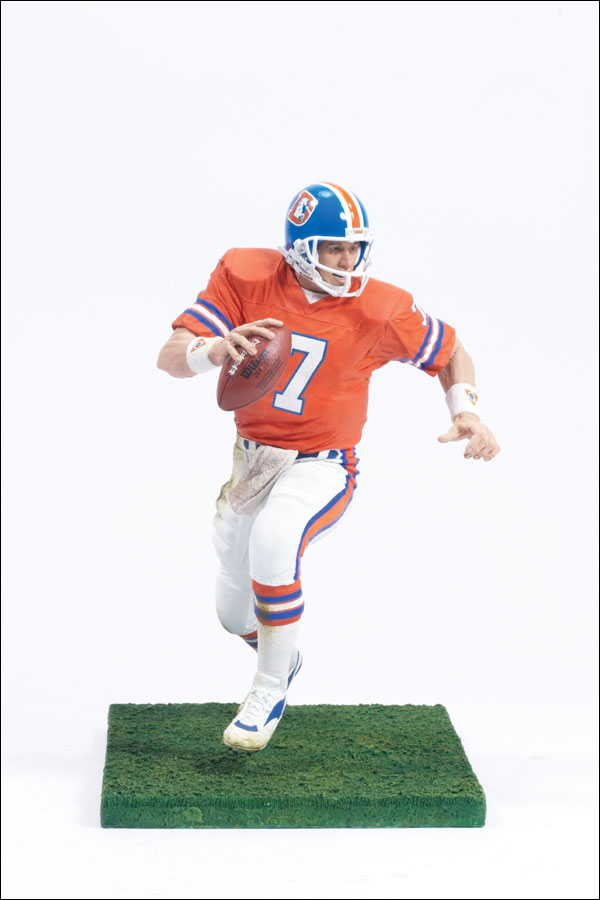 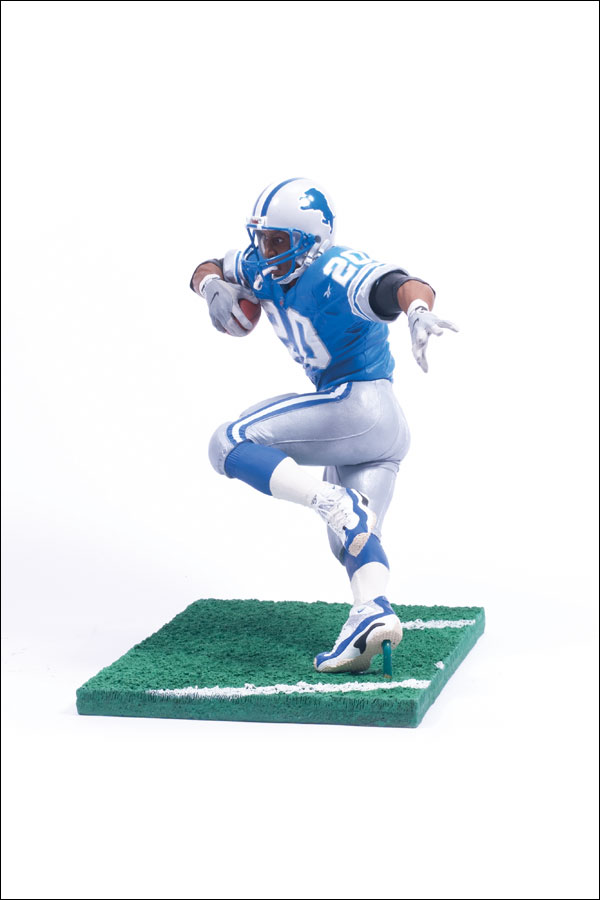 In 2001 McFarlane Toys took over the mantel from Kenner and became the exclusive producer of NFL figures.

Although initially fans and collectors were wary as to whether McFarlane could produce a quality figure at the price expected time has shown that not only can he produce excellent quality and highly detailed figures but also mass produce them and keep the price down to a reasonable amount.

Featuring many of the games top players and rookies from each season, frozen in historical or pivotal moments, they have proved to be a huge success with fans and collectors.

Each series has 6 or 7 “base figures” with several “chase” or “variant” figures of the leagues favorite or top players in their official team logos and colors.

The initial series of figures included:

But with the variants and chase figures the set size was bumped up to a total of 38 figures!

Much of McFarlane's success is down to the meticulous attention to detail ensuring that each figure represents the players as accurately and life-like as possible.

There are three main "brands" of McFarlane NFL Action Figures within the Sports Picks range:

Base Series- The base series consists generally of six figures, altough occassionally a seventh figure has been added, from the current teams and season. Many new players or rookies have seen their McFarlane debut in one of these series.

As well as the "base" figures each series will also include one or two chase figures which are harder to find and usually feature one of the base players in an alternate uniform. There are generally three releases during any given season to reflect any seasonal changes or trade-offs.

Legends- The Legend brand highlights the careers of the games top players and Hall of Famers. Each Legends series usually consists of four players from the games history although current players who are deemed as exemplary have also been featured. 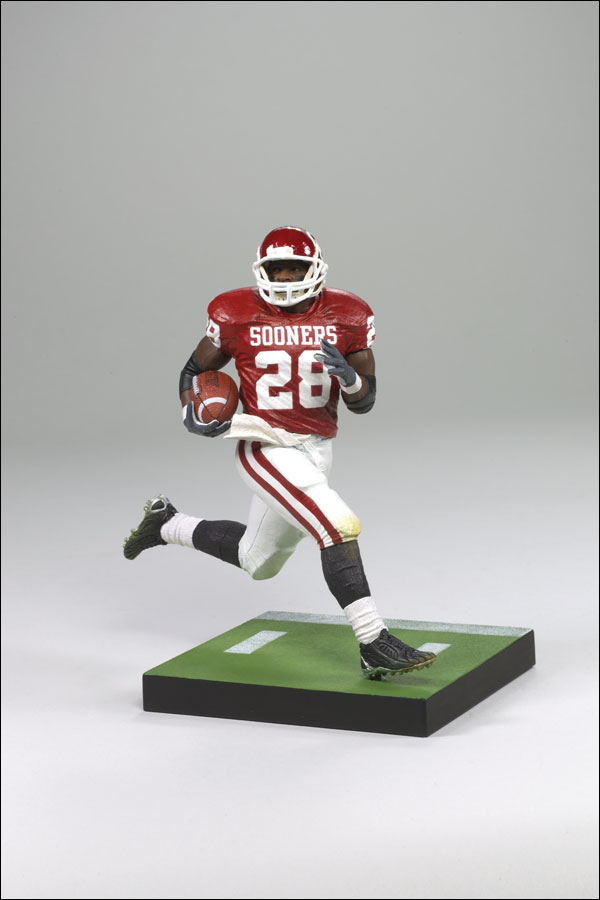 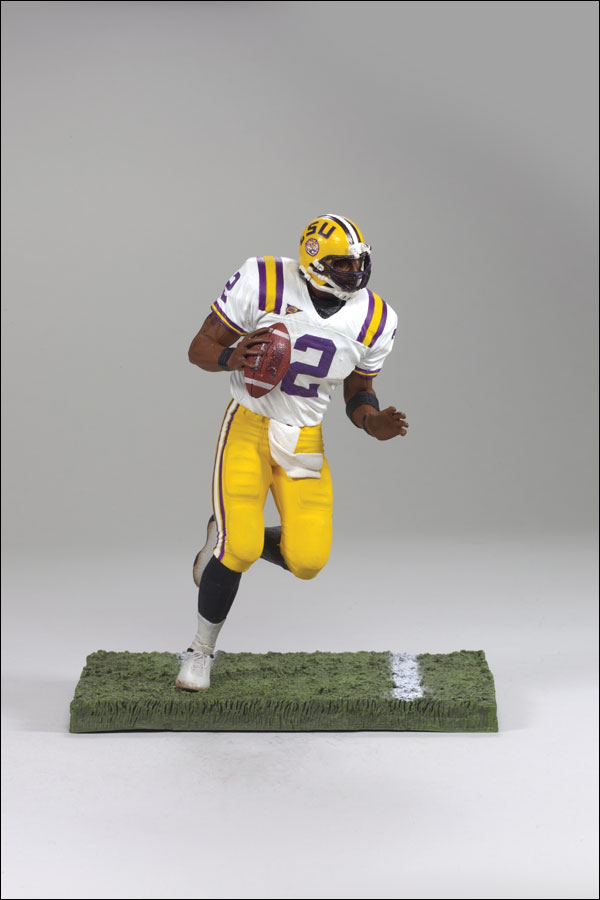 In 2009 McFarlane introduced a line of College NFL figures. McFarlane Toys worked through The Collegiate Licensing Company, an IMG company in charge of overseeing College Football Merchandise, to license this line which features 6-inch scale figures of some of the top pro football superstars in their school's home uniform, but despite the high expectations for this line there have only been two series of figures to date.

These figures were the first 4-inch scale figures to be produced by McFarlane and featured approx. 20 points of articulation on each figure allowing fans complete playability and enabling them to re-enact or even create countless sports action poses.

This “program” was a way to formalize the practice of having variant and chase figures in each series by giving collectors more relevant information and a standard format for these figures.

The primary focus of the McFarlane Sports Figures Collectors Level program was to create a line of collectibles that will excite the hard-core collector.

There are six Levels in the program; Bronze, Silver, Gold, Premier, All-Star and MVP.

Each Level matches to a limited production range with nearly every standard figure in a series having an alternative figure; either a Collector Level (TM) or Classic Chase figure.

Each Level figure will be sequentially numbered on the base, with the players' last name and the series name for authenticity.

Also each level has a production range minimum and maximum quantity matched to the specific Collector Level(TM).

The chart will list the Levels and the Level "Look for Figure" produced in the series, along with the production range.

The production range is set for each Level, but the actual quantity produced of a Level figure and what Level's will be used will vary from series to series.