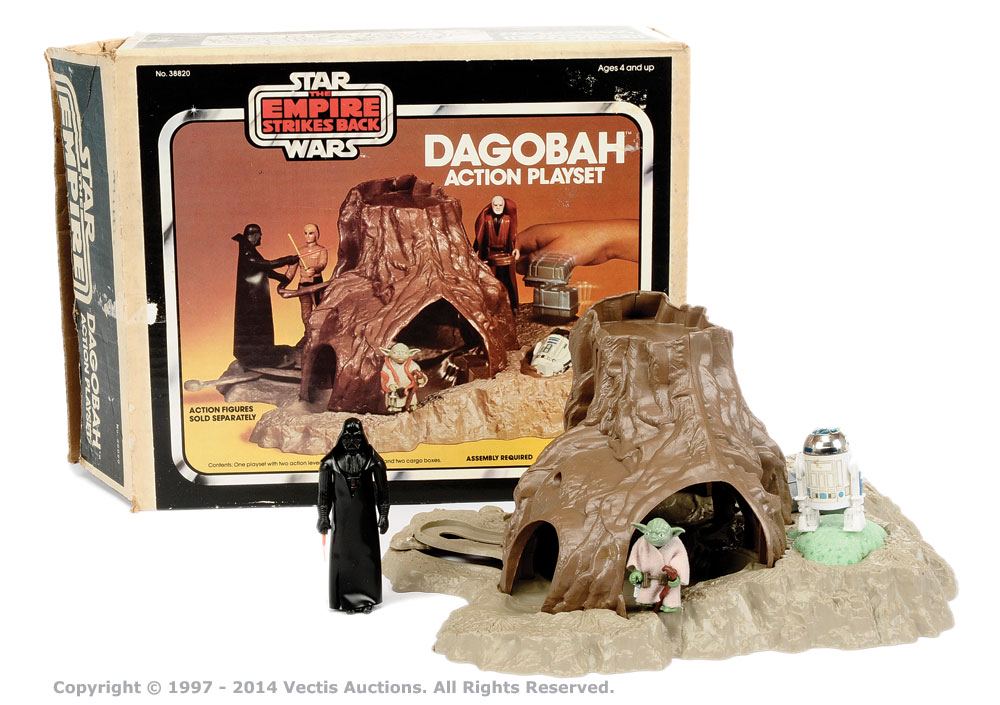 What is the Rarest Star Wars Playset

As well as the Star Wars figures there were also a multitude of classic and beloved Star Wars ships and Vehicles.Many of them even more iconic than the characters in the movies, such as; Luke Skywalker’s Landspeeder the Millennium Falcon, the TIE Fighter, the X-Wing fighter,  the All Terrain Armoured Transport or AT-AT, the rebel Snowspeeder and the AT-ST Scout Walker.

As with the figures, finding these with complete, undamaged packaging is extremely rare and the last few examples like the Imperial Shuttle, the A-Wing and B-Wing are some of the hardest to find and command very high prices for mint condition. These can make for excellent diorama displays to make your carded and loose figures feel very much surrounded by a window of their time.

There were also twelve inch figures, roleplaying toys, miniature playsets and too many other merchandising examples here and that was before the second explosion in popularity that began again with Hasbro in the late 90s and has not stopped.

Probably the biggest and best of all the playsets produced was one of the original releases, the Death Star Space Station.

However due to its sisize, a humungous 20-inches in height, very few were produced or shipped outside of the States.

The playset feautured 4 floors of action aand an elavator to transport the figures up and down between them.

The third floor had a retractable bridge for allowing Luke and Leia to make another swing across the chasm. It even came with a small black plastic cable that Luke could hang on to (but this item is often missing).

The second floor came with two consoles and an escape hatch that led to the ground floor which housed the trash compactor.

This was a small orange box with transparent plastic windows which was filled with colored pieces of foam. It also came with an exclusive Dianoga creature.

The trash compactor also had a feature whereby you could push one of the walls towards the doo and the hatch opened just in time for the heroes to escape.

The Cantina set was released in the 1978-79 Sears Christmas Catalog and is most famous for the Blue Snaggletooth figure it came with but it was nothing more than a cardboard backdrop and base of Mos Eisley and as a result it’s one of the most difficult playsets to find in unused condition.

Land of the Jawas was produced in 1979 and consisted of a plastic base, a cardboard backdrop of the Jawa Sandcrawler, and an exclusive Class-6 Escape Pod.

In 1979 a second cantina set, the Creature Cantina Action Playset, was produced. The playset featured a plastic base and a cardboard backdrop. The base also had a bar, a table, two action levers, and pegs for the figures. It also had doors that spring open when you press a button.

Palitoy also released a UK version of this set, with a few differences, on the Palitoy version had a lower bar, no action levers as well as being a bit taller and a slightly different right-side.

In 1979 Kenner released the Droid Factory. This playset didn't resemble anything from the movies and consisted of a ramp and a large movable crane and 33 interchangable parts that could be used to construct a variety of droids. However, the biggest and most important selling point, especially for collectors, is that this set was the only way to get an R2-D2 figure with his central, third, leg!

Due to the number of small parts available this set is almost impossible to find complete.

In the UK Palitoy again released their own version of the Droid Factory which was completely. This set had a conveyor belt rather than a ramp and crane but the droid parts were identical.

Due to the size, weight and cost of shipping or producing the Kenner Death Star playset many other countries created a Cardboard Death Star that was produced by  Palitoy (UK), Meccano (France), Irwin Toys (Kenner Canada through Sears), and Toltoys (Australia and New Zealand) in 1979.

The playset was a large semi-sphere that consisted of nearly 10 rooms as well as a ladder, a bridge andd a long chasm.

Also the roof features two X-Wing cannons and a transparent canopy to seat a figure. There was also an escape chute that led down into the trash compactor that had simulated moving walls.

Although made of cardboard the whole thing was wonderfully illustrated and was one of these best playsets to be released, in fact this was propably better than most other playsets on the market at the time.

This is another difficult set to find, particularly in good condition due to the many plastic pegs etc. 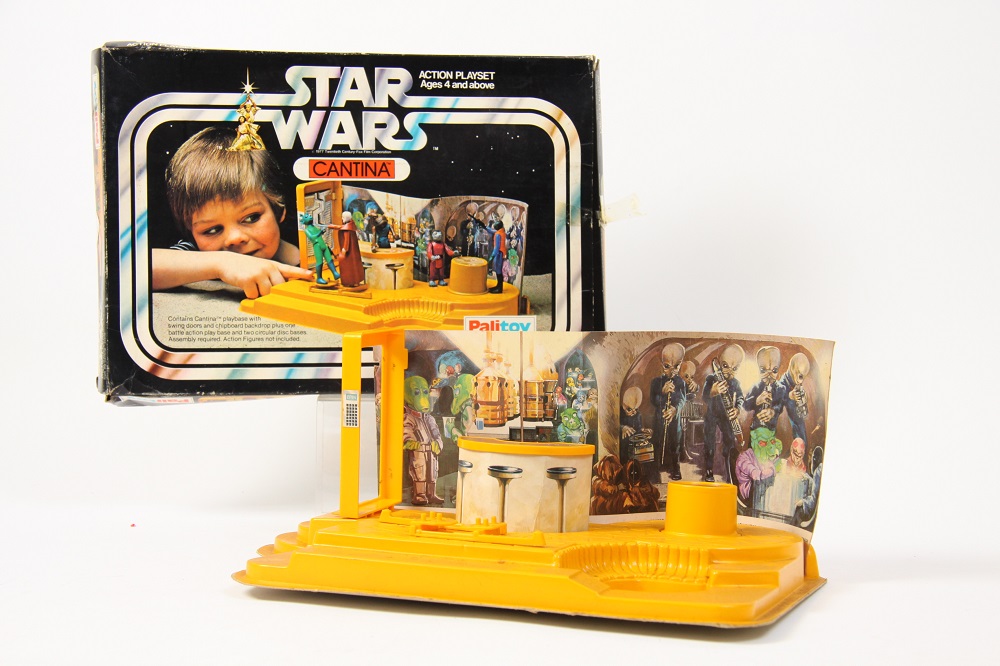 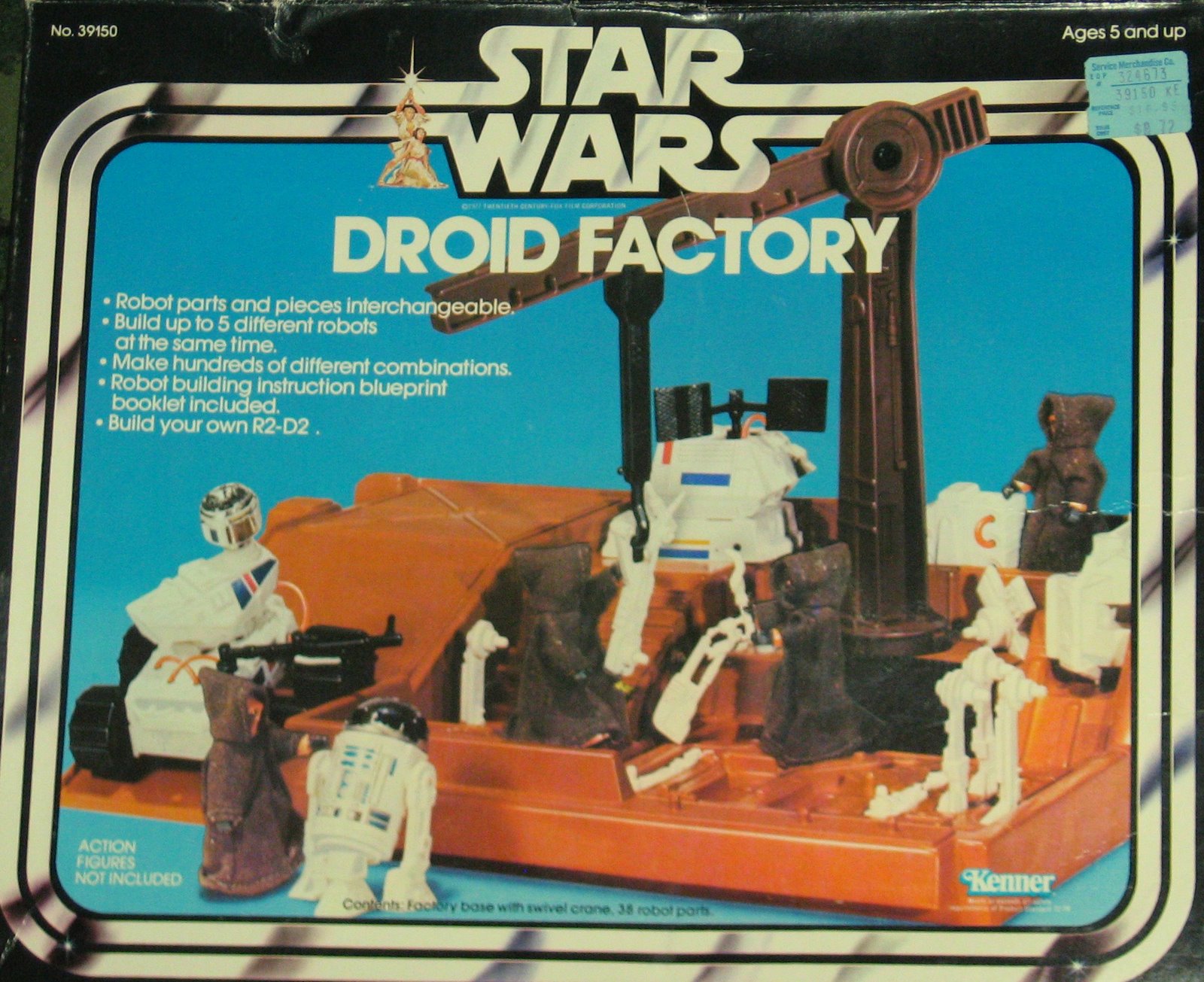 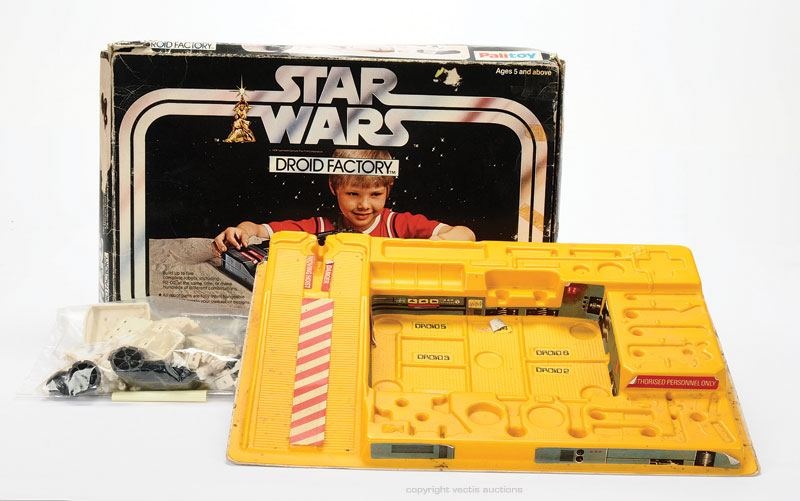 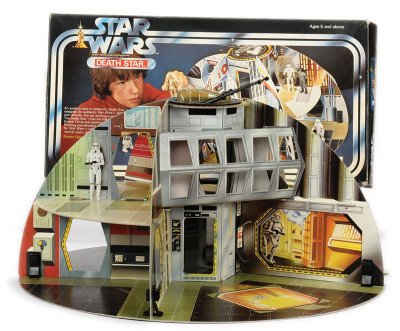 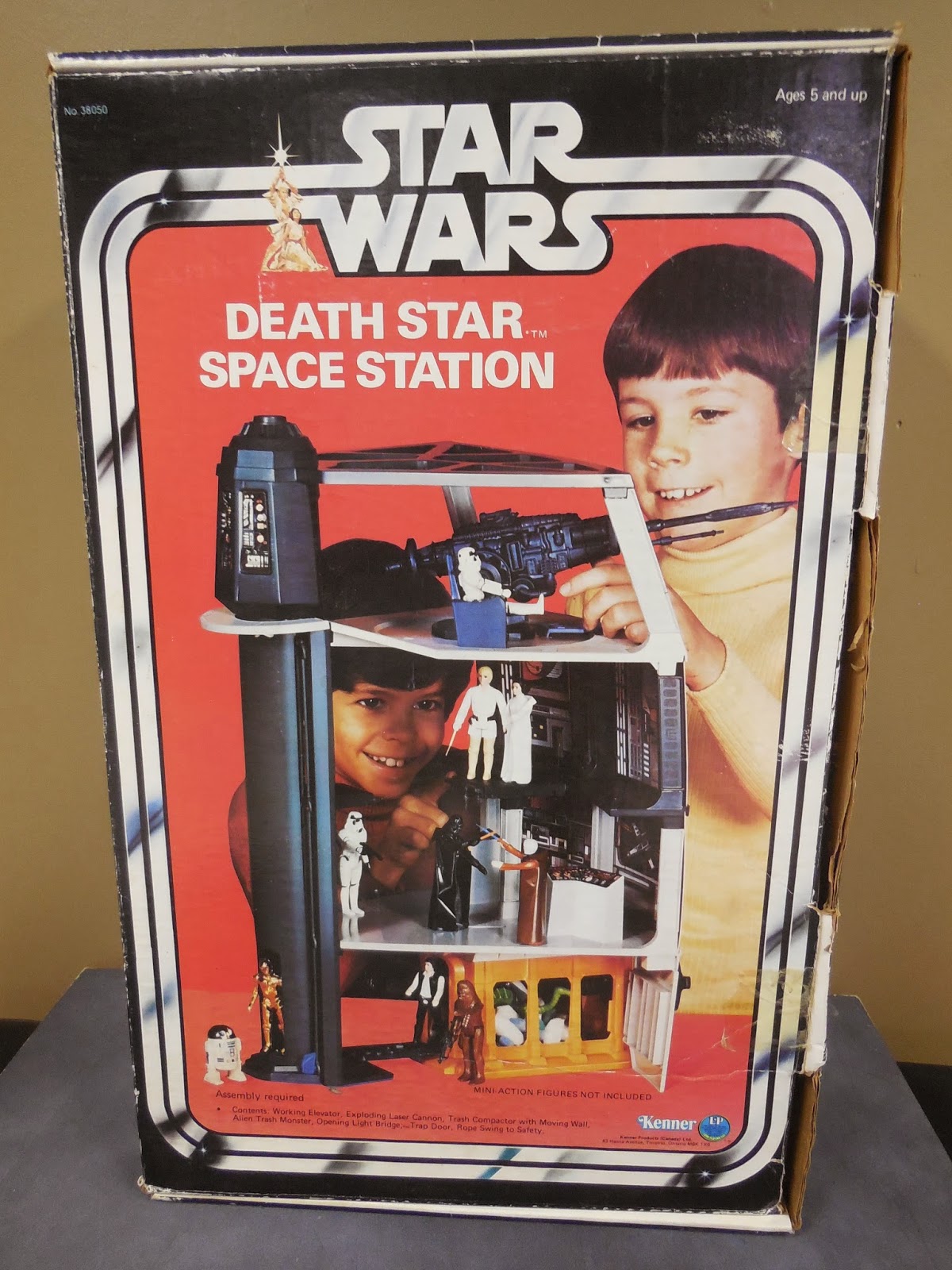 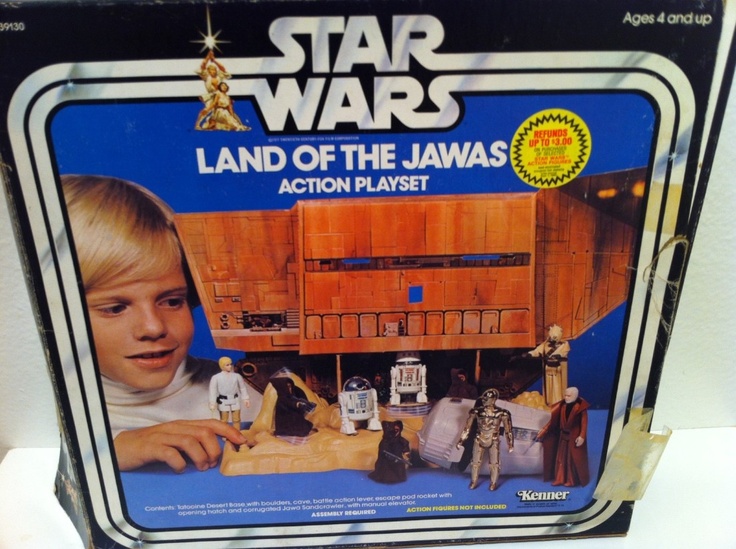 Land of the Jawas 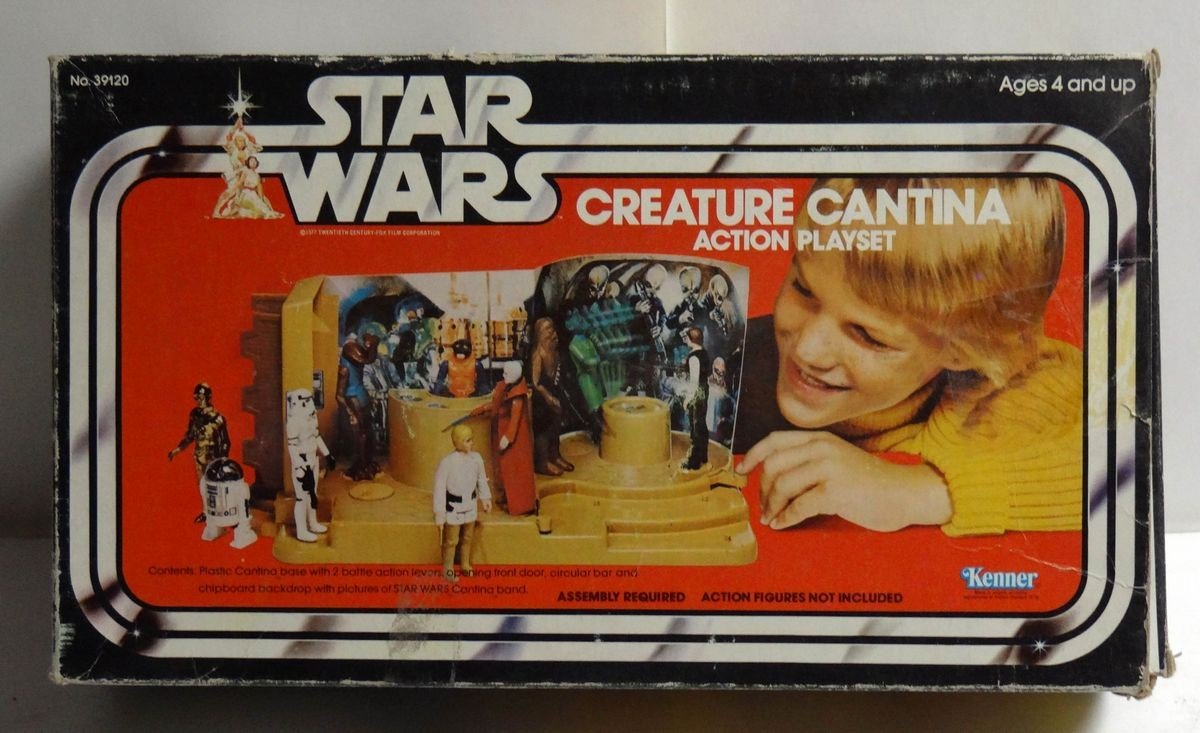 The Empire Strikes Back Star Wars Shps, Vehicles and Playsets

With the release of The Empire Strikes Back Kenner introduced a series of new playsets to entertain young fans.

The Hoth Ice Planet Adventure Set, released in 1980, re-used the Land of the Jawa playset, with a cardboard AT-AT Walking in place of the Sandcrawler. Also a 1.4 FD P-Tower Laser Cannon, often nicknamed “Radar Laser Cannon replaced the escape pod, but this canon was smaller than the separately released "Radar Laser Canon" accessory.

The only Bespin playset that Kenner released was the Cloud City (1980) playset. This was a Sears USA and Canada exclusive and came packed in a small box, similar to the Cantana set, with four figures (Han Bespin, Lobot, Dengar and Ugnaught). Although small this was quite a cool set. The cardboard backdrop represents a hallway and the torture chamber which Han Solo was tortured in, in the movie.

The next set was the Darth Vader Star Destroyer Action Playset which resembled the command bridge of a Star Destroyer. There were two crew pits; Vader's meditation chamber, which had space for Vader to sit in and lit up; a rotating communications platform and an escape hatch but most of these action features were never seen in the movie.

The second set based on Hoth was the Imperial Attack Base (1981) which had an exploding ice bridge and command post, as well as a rotating , clicking cannon which could be manned. Although this playset had no relevance to anything from the movie it was a great toy.

The Turret and Probot Playset (1981) was the only way of getting the Probot figure. This was a pretty straight forward playset that consisted of the Arakyd Viper Probot which which when placed on top of the pole would destroy itself when pulling the action lever. The Turret was removable and had an opening door and hatch to the cannon.

The Dagobah Action Playset (1981) was another very cool set that was based on Yoda's home. There was also a "swamp" feature using foam which although very simple was also very effective. The brownish plastic base was also very detailed with small frogs and lizards sculpted on it. There were a few neat features on this set which made it rather cool and unique.

The third Hoth set released from The Empire Strikes Back was the Rebel Command Center Adventure Set (1981) and was another Sears exclusive. This set was another one that used the Land of the Jawas base. The backdrop used for this set was the North Hangar 7 of the Echo Base with the Millennium Falcon. The three figures included in this set were Luke Hoth Gear, R2-D2 with Sensorscope and the AT-AT Commander. May be because this was one of the later sets and a Sears exclusive it has become fairly difficult to find.

In 1983 Kenner released one of their last, and largest playsets, Ewok Village Playset but only two Ewoks from Bright Tree Village were available: Chief Chirpa and Logray. The set basically consisted of three plastic trees that acted as pillars for the Ewoks centrl meeting area.

One of the trees has a hut with an opening top for positioning the figures, another has an escape passage that leads to the bottom of the playset and the third has a working elavator to carrie the figures to and from the meeting area.

Another feature was a swinging boulder that was attached to the largest tree and the second is a net under the central meeting area that can be pulled up to trap several figures, as in the movie! 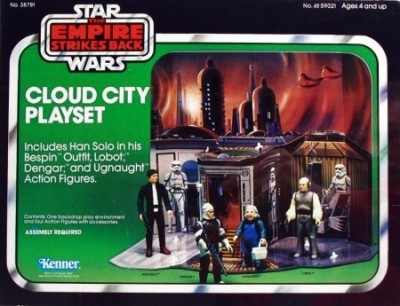 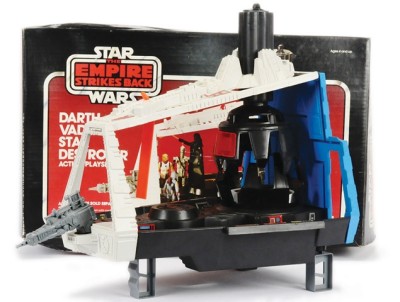 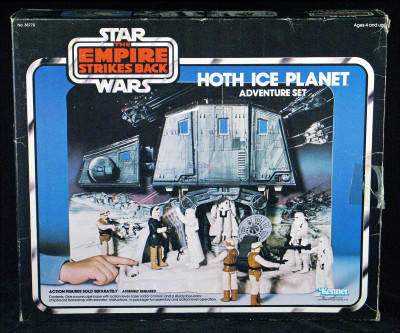 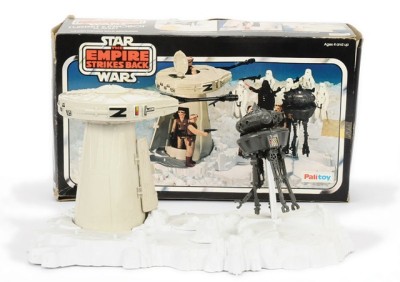 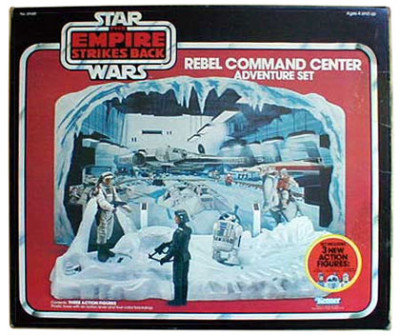 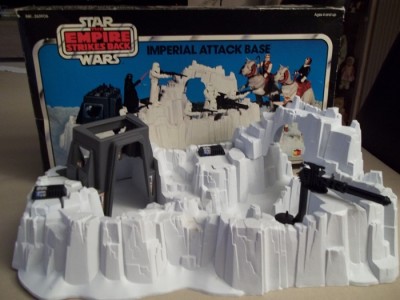 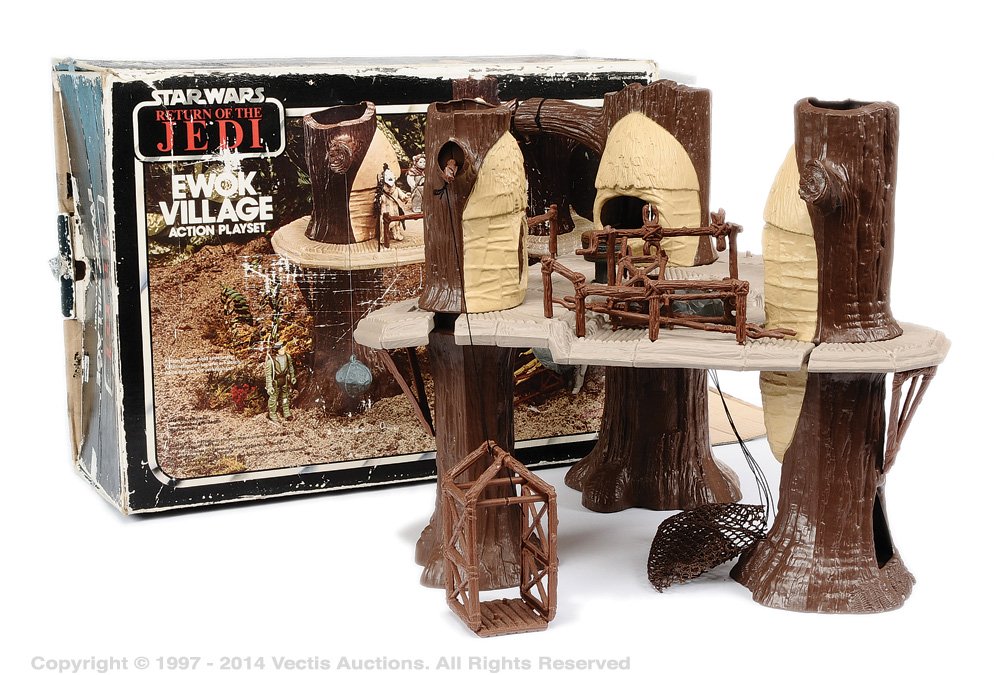