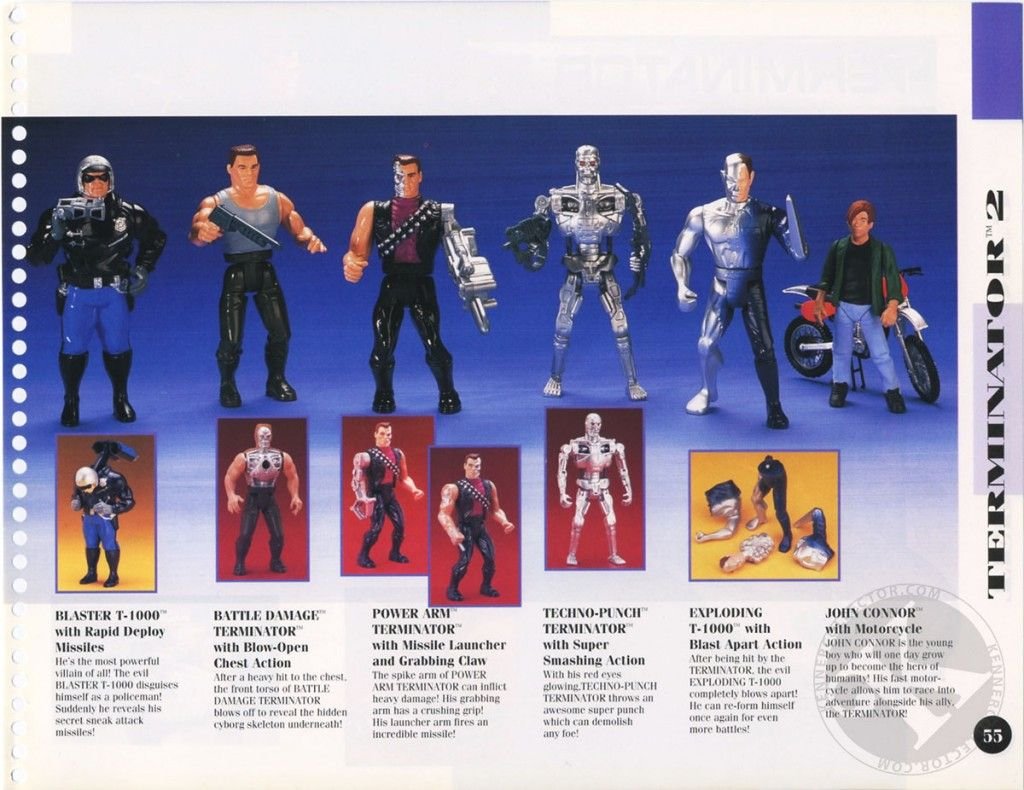 The first Terminator action figures were released in 1991 by Kenner with the release of Terminator 2, but why weren’t any released for the original movie?
The original Terminator movie came out of nowhere in October 1984, a low budget sci-fi thriller for adults that even the studio couldn’t get their head around, and as a result there was no toy line tie-in to speak of. 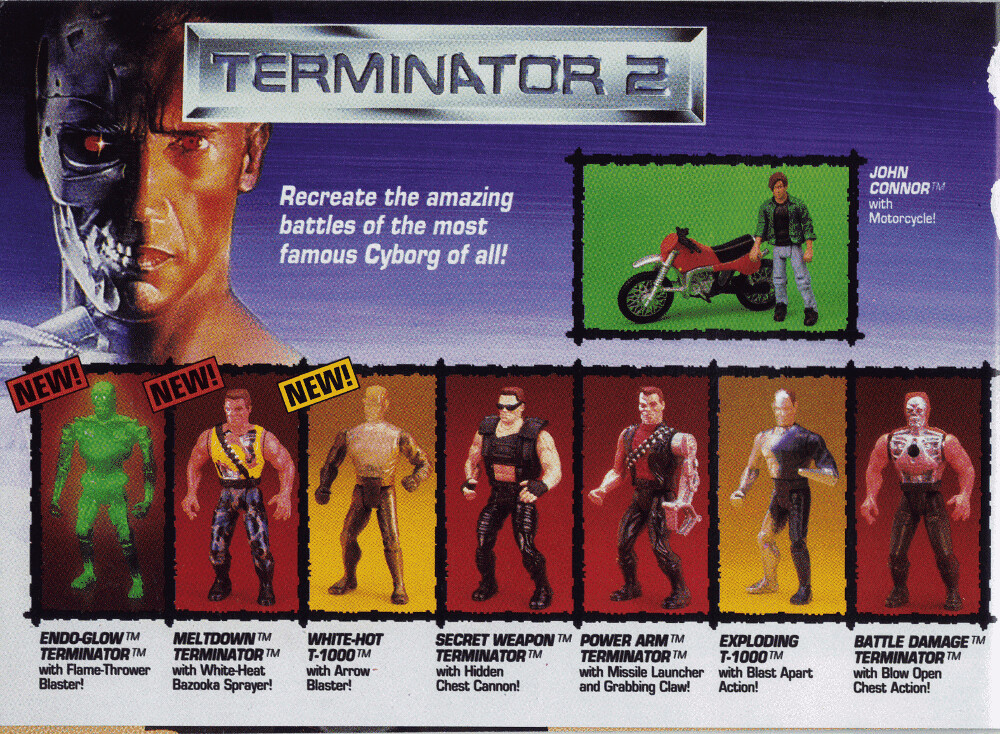 In 1991 when Terminator 2: Judgment Day emerged on the Fourth of July weekend with a huge marketing machine behind it and much more of a family blockbuster feel there was, at last, a line of toys also.

These figures from Kenner were big and chunky, with vibrant but not ludicrous or unrealistic colour schemes. In fact, if you look at what toys were doing in the early 90s era it’s actually kind of remarkable how accurate these are.

Part of what frustrated me personally about this series, since I was aged 11 when it came out, was that I was slightly beyond the ideal play age but approaching the point when I wanted the figures to look accurate.

There were several versions of the T-1000, none of which particularly looked like Robert Patrick and most of them centred around a play-feature like a missile launcher that came out of his back, which all the fans knew he couldn’t possibly make with that mimetic poly-alloy body.

None of the T-800 figures were based on the Schwarzenegger, due to licensing problems with his likeness, and came with his full leather jacket with interchangeable heads, with sunglasses, and no sunglasses and battle damage, plus an interchangeable battle-damaged arm, a mini-gun and a grenade launcher.

I mean, as a child that seemed like a no-brainer to me. The closest we got was a version with two bare arms, one of which was interchangeable with an enormous, bulky missile launcher and of course non-swapping heads.

Also, his bent knees looked unnatural, especially for a Terminator. Part of the character’s identity is a stiff, upright gait and a relentless pace but these knees make him look too organic. Ostensibly they were to lower the figure’s center of gravity and support him when he was pointing his enormous arm-canon.

Fortunately, the John Connor figure was missing all play features and instead came with his trail bike which meant he was, by means of exclusion, a lot more realistic looking. Probably the most movie accurate of them all was the large-scale talking terminator.
To go with this series there was the customary crazy car that no Terminator would ever be seen driving. This car screamed of the 90s more than any other element of the line. 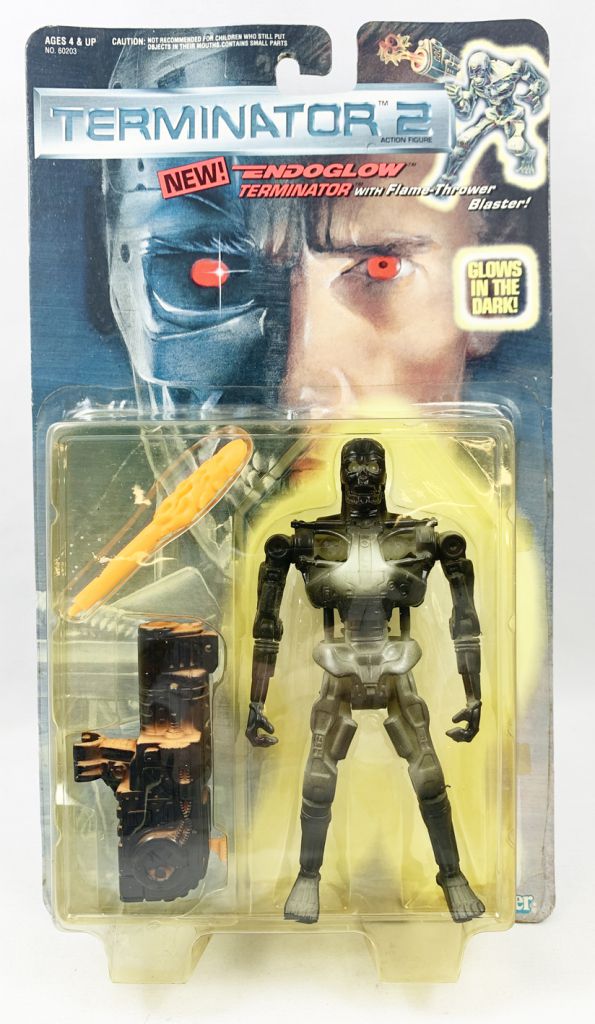 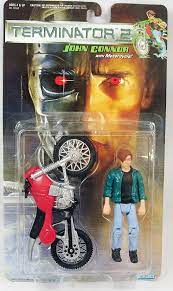 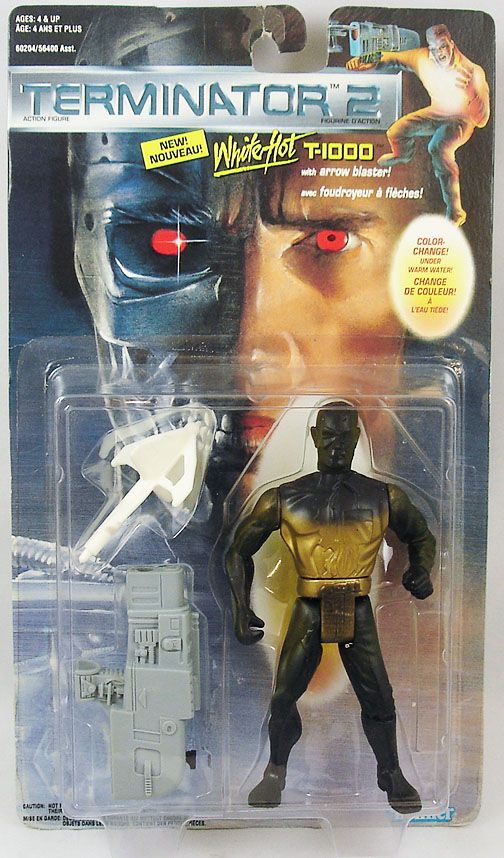 I mean look at this thing. It’s so overdesigned, it’s beyond absurd. Within the fictional context of the Terminator mythology, who made this car and why?

It was splattered with silver, possibly from a collision with the T-1000, violent enough to liquefy him. It had what looked like an Exocet missile launcher attached, which rules out subtle infiltration into 90s Los Angeles, and there was a big mask thing for targeting, which ruled out the Terminator’s ability to do that and an Endoskeleton head right on the front bumper, next to an enormous upper case T.

By comparison, the motorbike looked relatively low key, and there was no Sarah Connor of course, because little boys wouldn’t want to play with one of the most awesome female characters of all movie history and the narrative focal point of Terminator 2, but thank the Skynet, they made a figure of the completely made up future war villain; Kromium (that’s a little sarcasm). 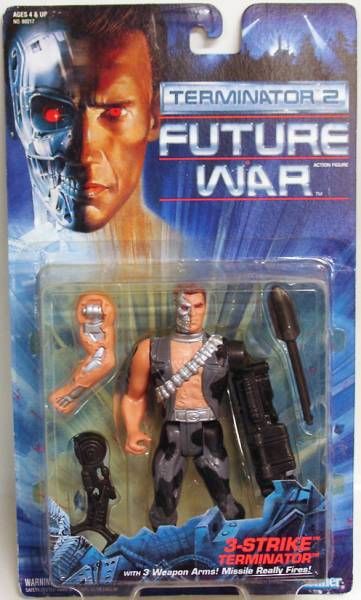 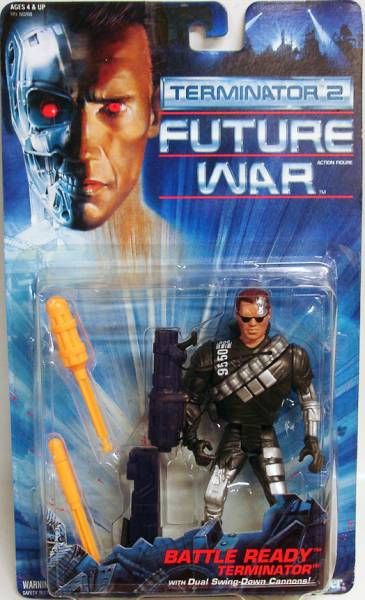 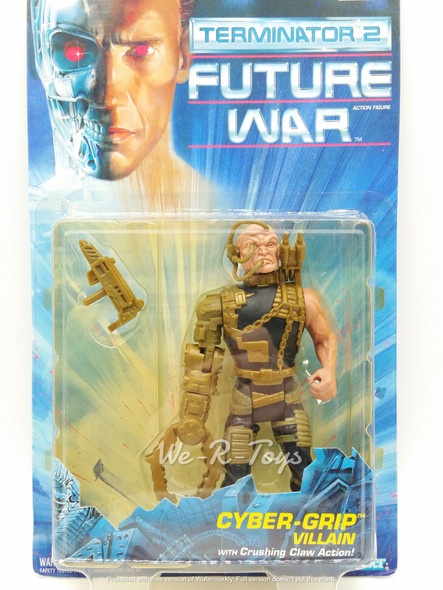 Future War was an extension of this original line, as was a limited tie-in line with the 3D Universal Studios ride.
By and large, none of these figures fetch too much on the secondary market today, except for the odd but fun playset, which came with this line. Dubbed a bio-flesh regenerator, this set would cover the included endoskeleton figurine in goop that would then form a rubbery, removable skin.

After these figures, as with the movies there was something of a wasteland in terms of releases. Everyone knew this franchise would be BACK, but nobody knew in what form or when.

Finally in 2002, with the third movie on the stormy horizon, McFarlane Toys released several Terminator figures in their line of Movie Maniacs.

There were four of these, and it was almost perfect for an adult collector and mega fans of the movies. A T-101 endoskeleton, now far more detailed than the big silver skeleton Kenner offered, a Robert Patrick-looking T-1000 with interchangeable body parts to replicate iconic moments in T2, Sarah Conner at long last, with interchangeable heads and looking super-determined to terminate Miles Dyson.

Where it fell down was the T-800. Unlike Kenner, McFarlane did not have the permission to use Arnold Schwarzenegger’s likeness.
They had the Terminator, but not Arnie. So as a kind of halfway house they mangled the face of this figure so as to be recognisable enough for everyone who knows one of the most famous actors of all time, but shredded enough to escape litigation. 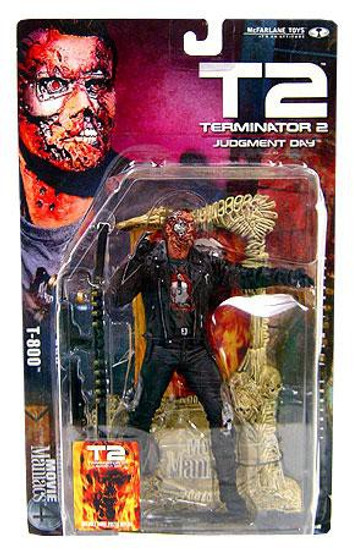 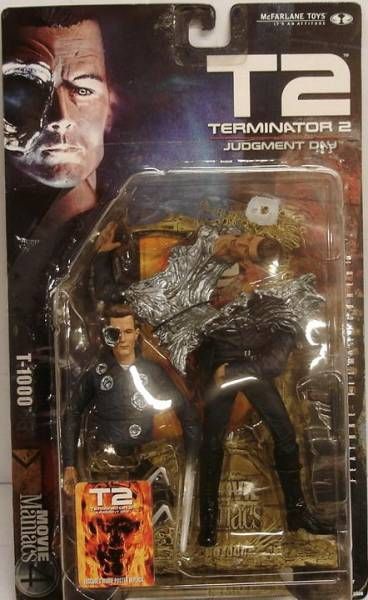 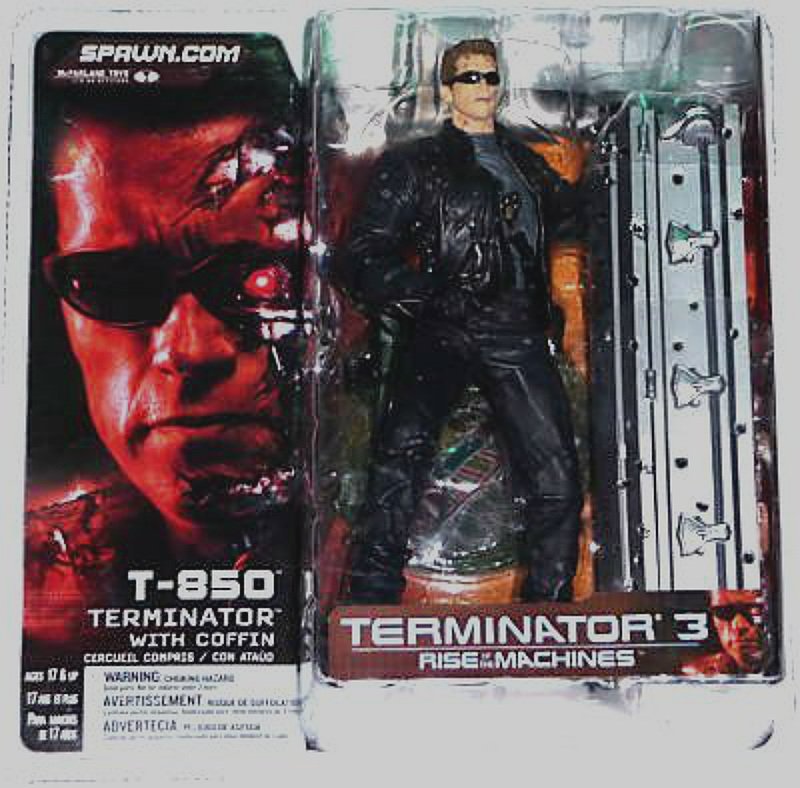 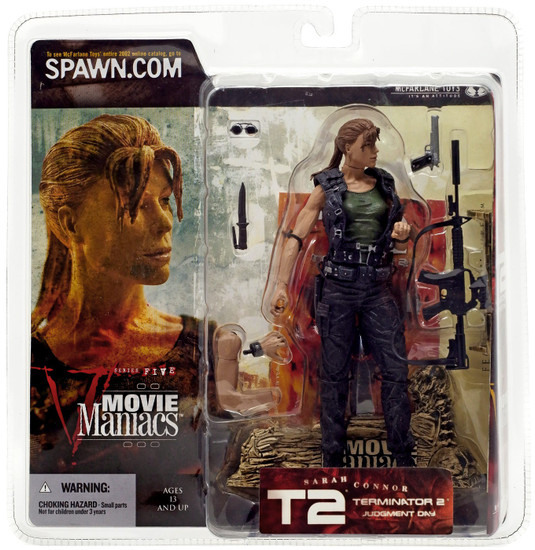 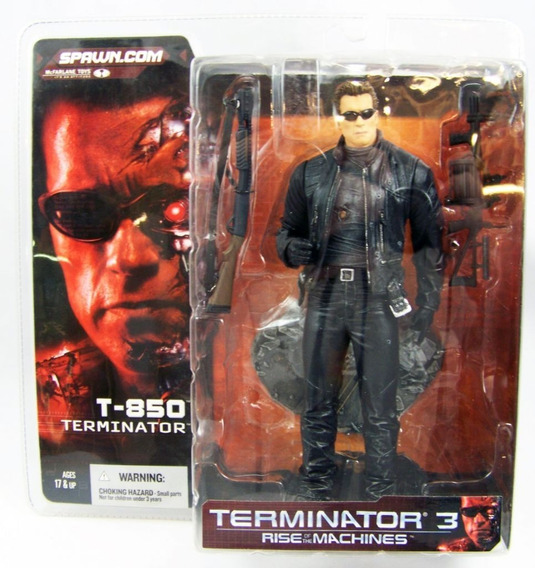 When the next year rolled around and Terminator 3 was released in theaters McFarlane toys were there with the license already in place, releasing two accurate Schwarzenegger Terminator figures for the first time in this scale, as well as the Terminatrix and her wicked looking endoskeleton. This character, it would appear, is the more sought after from this era.

In 2009 when Terminator Salvation semi-rebooted the movie series again Playmates had the license and brought things back full-circle to a more kid-friendly and play-oriented series of 3.75” scale figures.

Since this movie was set during the future war this toy line is actually far more in line with G.I. Joe, with vehicles to match, as well as 10-inch super-sized figures and a glut of slightly disturbing Terminator dress-up toys. 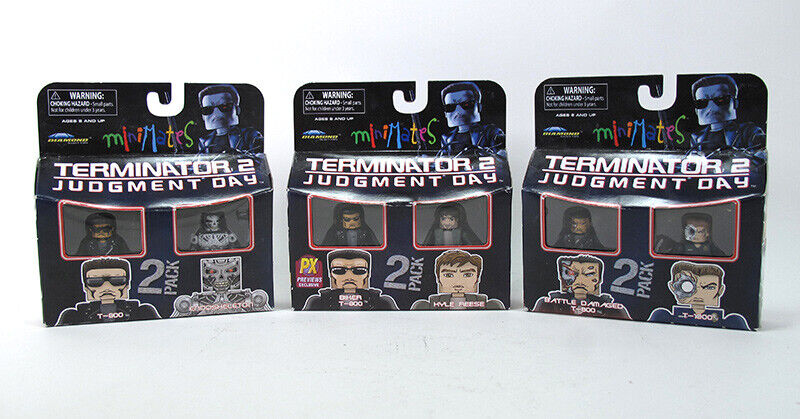 Also, in 2009 the first Terminator Minimates emerged. As always these packed an enormous amount of personality into selection pack of tiny-framed poseable figures. Once again the emphasis was on the first two movies.

From this point on the Terminator license was held by NECA, who delivered several lines based on the fan favourite first two movies.

These finally managed to deliver accurate, quality constructed figures, with multiple heads, scaled weapons and even poseability, all based on the characters we wanted to see. 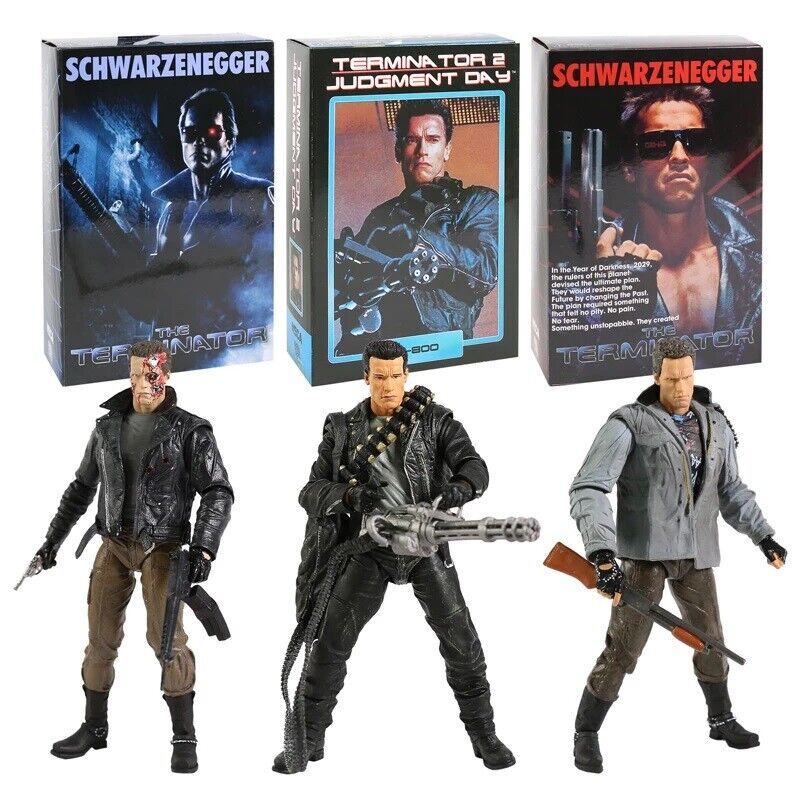 This line included the first examples, in this scale, of a movie-accurate Kyle Reese and the original Terminator, and several perfect Schwarzenegger T-800 figures from Terminator 2, as well as the T-1000 again.

More recently NECA have begun releasing figures based on the 80s and 90s era video games rather than the movies, which meant vibrant, stylised colour schemes. Robocop vs Terminator on the Sega Mega Drive or Genesis if you’re American provided the inspiration for these distinctive new repaints.

NECA retained the license in the run-up to Terminator Genisys.

Beyond the realistic adult collector fare, Funko released several lines of Terminator-themed retro ReAction figures.
These were modelled after the big, simple figures from the late 70s, although they ironically harken back to a time well before the early 90s Kenner Terminator figures. 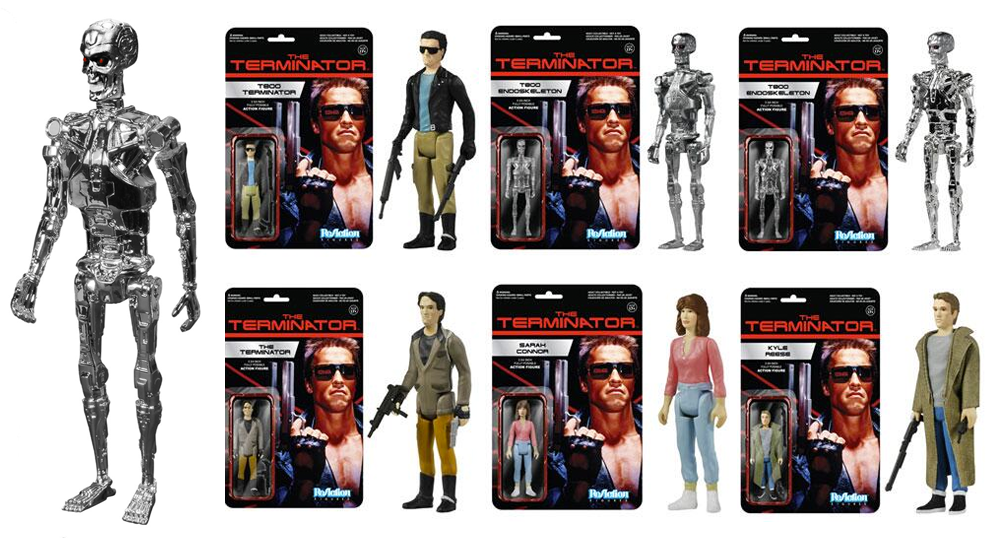 And finally for the serious sixth scale luxury high end action figure connoisseur, Hot Toys are once again in our corner with several astonishingly rendered stars of the Terminator franchise.

These included many incarnations of Schwarzenegger’s T-800, Christian Bale as John Connor, Sam Worthington as Marcus Wright and an exquisite Linda Hamilton as Sarah Connor.

The Terminator movie series is sure to continue rebooting and reconfiguring this endlessly looping war with the machines and you can be fairly sure that until they hit upon a truly winning combination of game-changing ideas and onscreen personality that the first two movies will be the ones we keep going back to in toy form.

I hope you have enjoyed this collector guide. If you would like to know more about Kenner and NECA be sure to check out our fascinating manufacturer histories on those two. 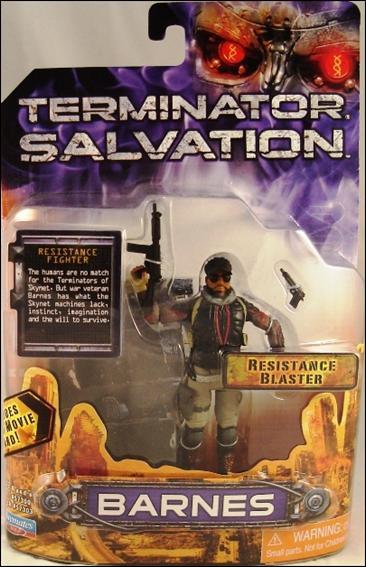 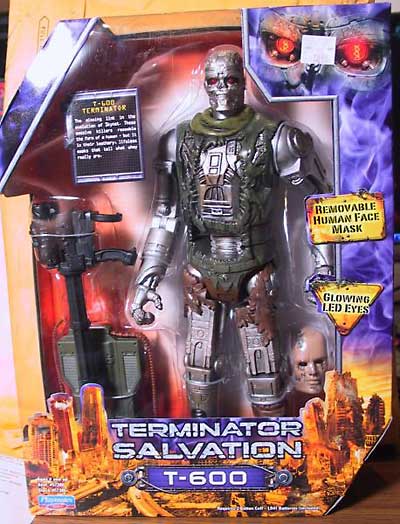 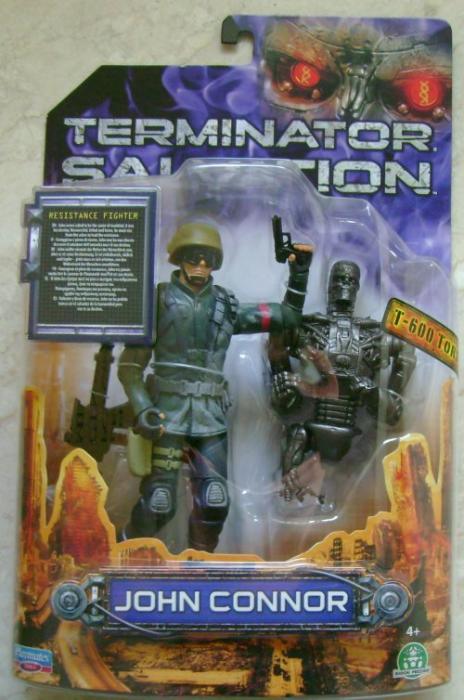