The Lone Ranger made his very first ‘public’ appearance way back in 1933 as a radio serial and due to its huge popularity, it was later adapted to both TV and movies. He was a former Texas Ranger who fought outlaws in the Wild West with his native Indian friend Tonto.

The original TV series ran from 1949 to 1957 with  Clayton Moore starring as the Lone Ranger and Tonto was played by Jay Silverheels, who was a Mohawk from the Six Nations Indian Reserve in Ontario, Canada.

His title doesn’t come from the fact that he likes to work or ride alone but because he was the only surviving member of a group of six Rangers who are ambushed by a group of outlaws led by Bartholomew "Butch" Cavendish. Tonto later stumbles upon the massacre and finds one of the Rangers barely alive and nurses him back to health.

The original TV series ran from 1949 to 1957 with  Clayton Moore starring as the Lone Ranger and Tonto was played by Jay Silverheels, who was a Mohawk from the Six Nations Indian Reserve in Ontario, Canada. 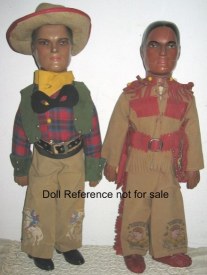 The very first Lone Ranger action figures were released by the Dollcraft Novelty Company of New York City in 1937/38. The listed copyright is T.L.R. Company, Inc. Two dolls/figures were produced as Hi-Yo-Silver dolls, each standing approx. 10 1/2, 15 1/2 or 20" tall, in height, of Tonto and The Lone Ranger. 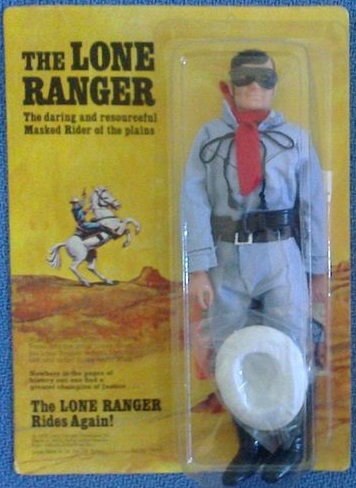 Many thanks go to the following sites and catalogs which were used for research as well as some of the images:

Branded in the 80s