In 1985 “Rankin/Bass Productions” an American Production Company produced “ThunderCats”, one of the finest animated series in the last 3 decades. The Thundercat series aired in 1985 and ran until 1989. This series was one of the top-rated series of its time and is still very popular with fans all over the world today. In many fan’s hearts, this series holds a very special place, especially with those who were youngsters during the 1980s. 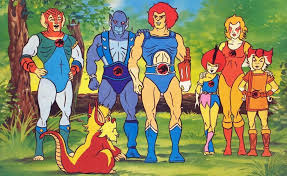 The series follows the adventures of a group of a cat-like humanoids called, Thunderians, who had escaped from their planet, Thundera.  Thundera was dying and the Thundercats were forced to migrate unwillingly to the third Earth, but they are attacked by their enemies “the Mutants of Plun-Darr”, who bombarded most of the fleets but spared this one because they believed that the “Sword of Omens” was on this fleet.

The show mainly revolves around the life of the Thundercats leader Lion-O, who had to spend his youth in suspended animation. This allowed for great character development and storytelling.

Over the more than three decades since its debut the series has continued to endure and entertained generations of fans and remains popular to this day. 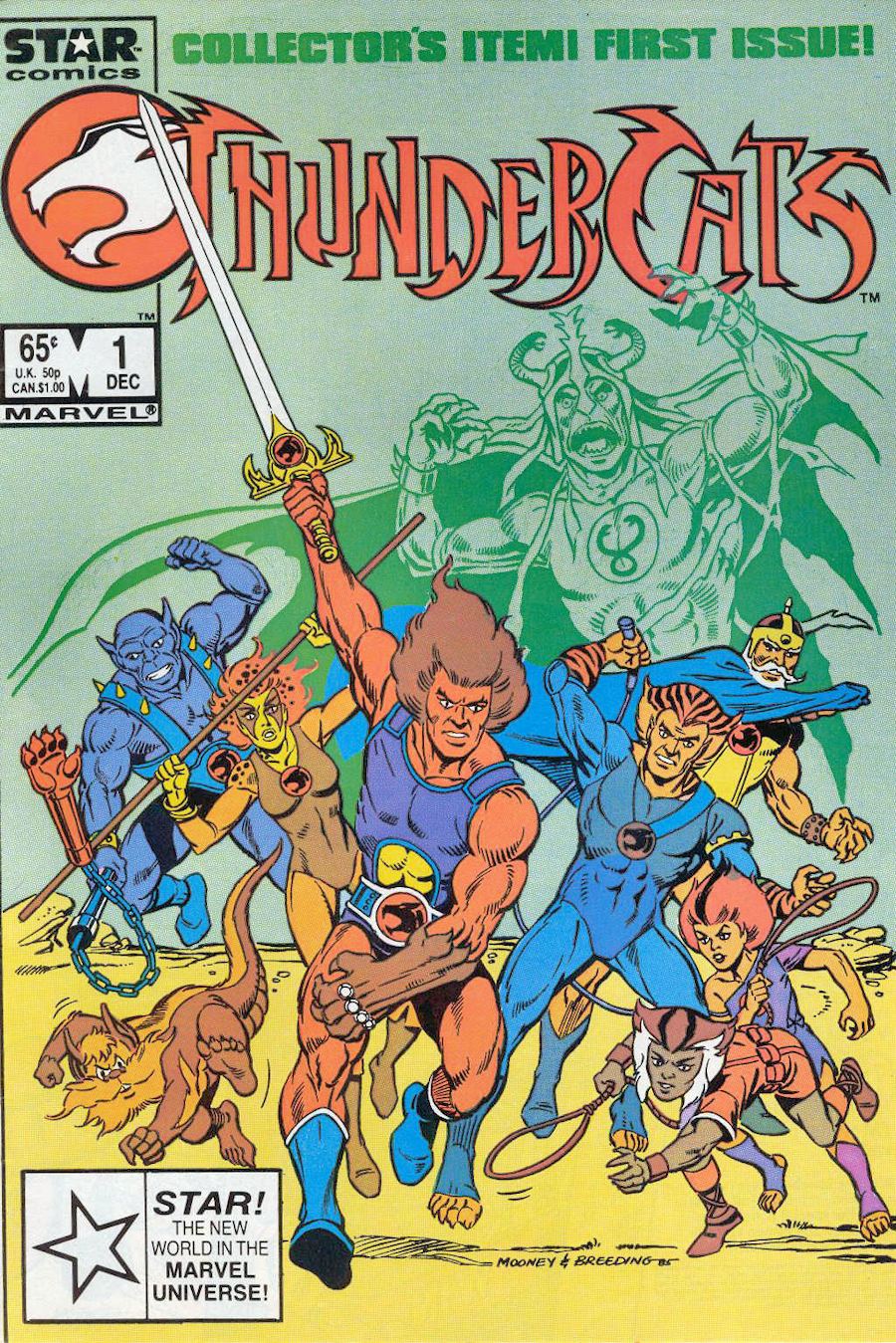 Comic-books and TV animated shows were all the rage in the 80’s so not to buck the trend there was also a Thundercats comic, continuing the adventures of the young leader Lion-O and his fellow Thundercats and their fight against evil. 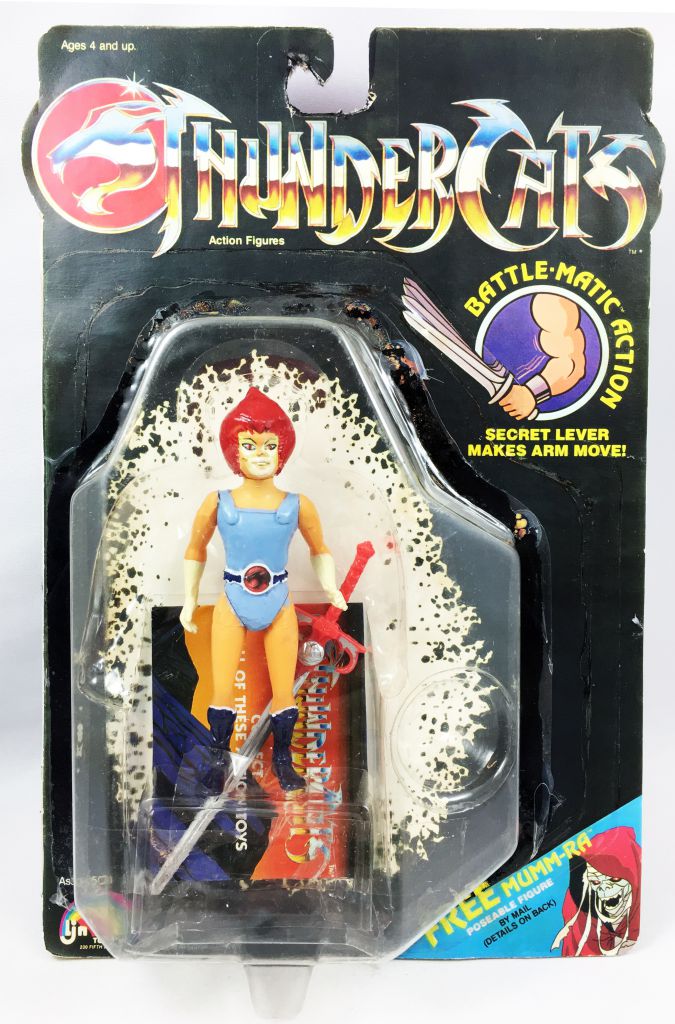 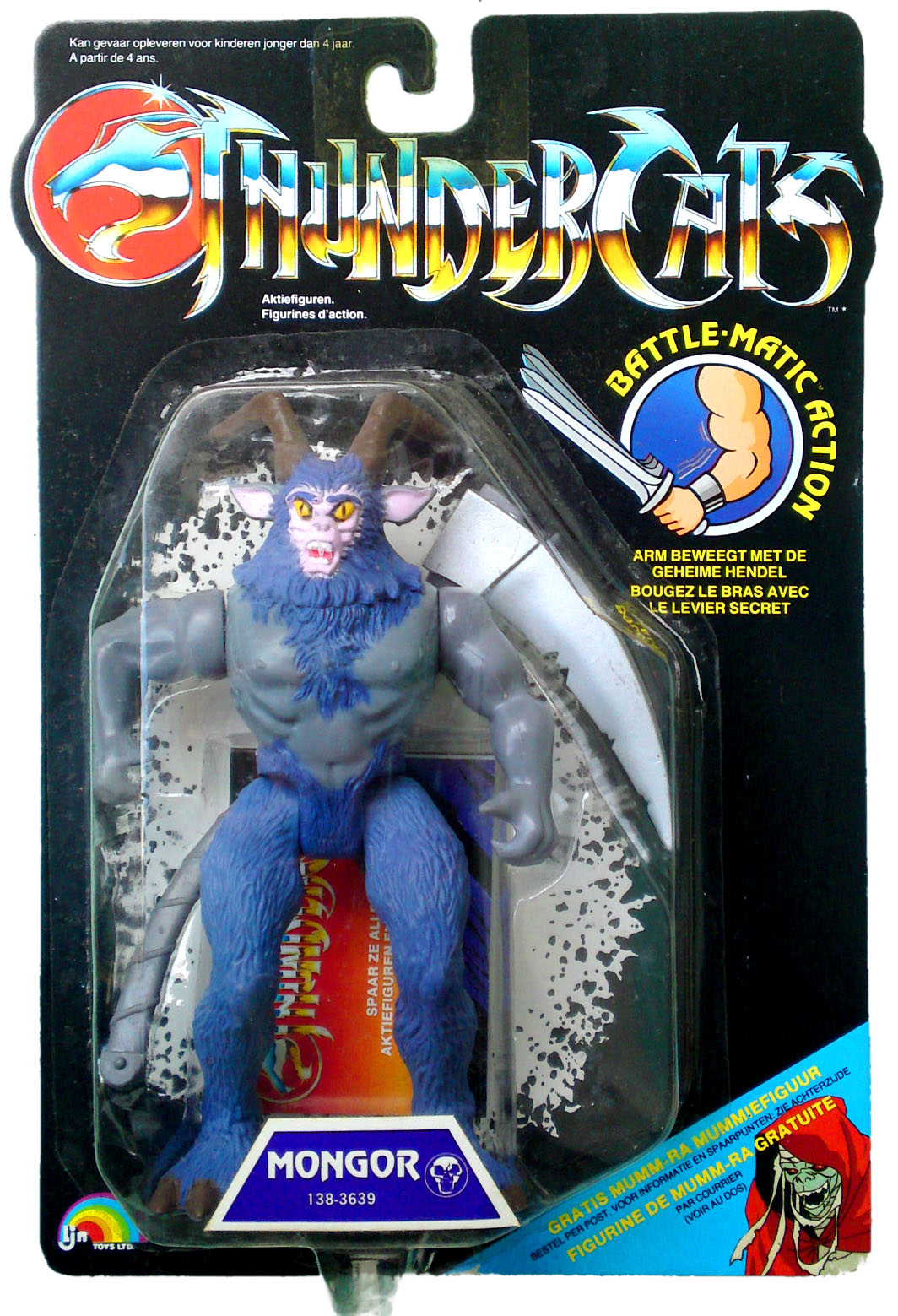 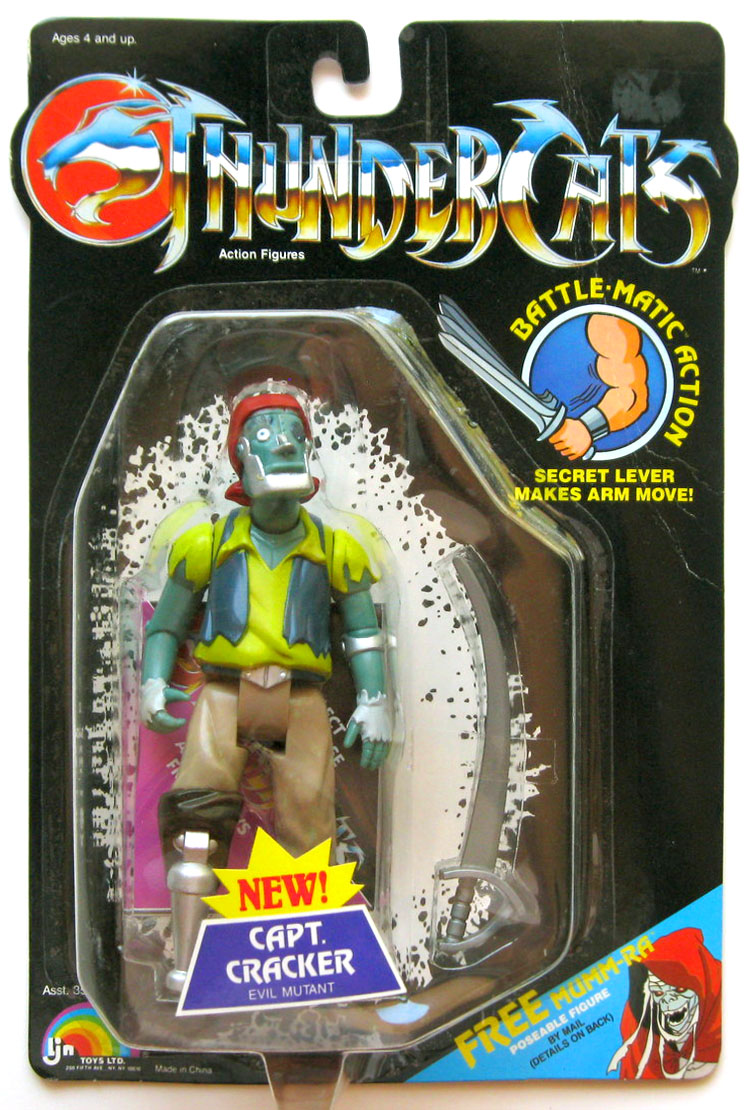 Right after the launch of the original series of “Thundercats”, LJN released their line of Thundercats figures. But unlike the TV series the action figure toy line only lasted for three years.  it was a small line and distribution was not on a huge scale like other toy line figure at that time. Despite this it had a loyal following of fans and still remains popular with collectors.

The Thundercats action figures were 6 inches tall and were made of rubber and PVC with articulation at the hips, shoulders, and neck and a “Battle-Matic-Action”. This feature made every toy perform a different action when a lever on it was pressed, this feature helped this toy line to grow a huge fan base in no time. A couple of the figures even had light-up eyes!

The line later expanded to include small articulated figures of their allies and companions as well as vehicles, monsters, weapons, and accessories. The jewel in the crown of the line was the Cat's Lair Playset. This was a massive set with lights and sound to simulate a laser battle and there were battery-operated backpacks for some of the individual figures.

There were also smaller articulated figures (vehicles, weapons, Evil monsters) included in this toy line. Another unique feature was that the vehicles back-ends often incorporated a handgrip with triggers and buttons that could be used while they were flying or rolling along the ground.

LJN produced and released this toy line in three individual waves. Each new wave contained new toys along with all toys that were released in the previous wave.

A fold-out “Mini Catalog” was included in almost all packages that featured all LJN toys released with each wave. The total number of toys made in this production was also mentioned in Mini Catalog. Along with the Mini Catalog, the backing cards showed images from the catalogue.

An American Company, Kid Works, was licensed in the mid-1980s to produce action figures of the Thundercats. The figures produced by Kid Works were 3 inches tall, each figure came with a weapon but unlike LJN, these figures do not have any articulation.

Kid Works produced the same characters as in the first two series of the LJN line, and although they also released some playsets the didn’t produce and vehicles.

Boxed Snowman with Snowmeow was the only figure in this toy line that was very hard to find, and this figure was only produced by Kid Works. Kid Works produced two gift sets but the figures in these sets were also individually available with their cards. 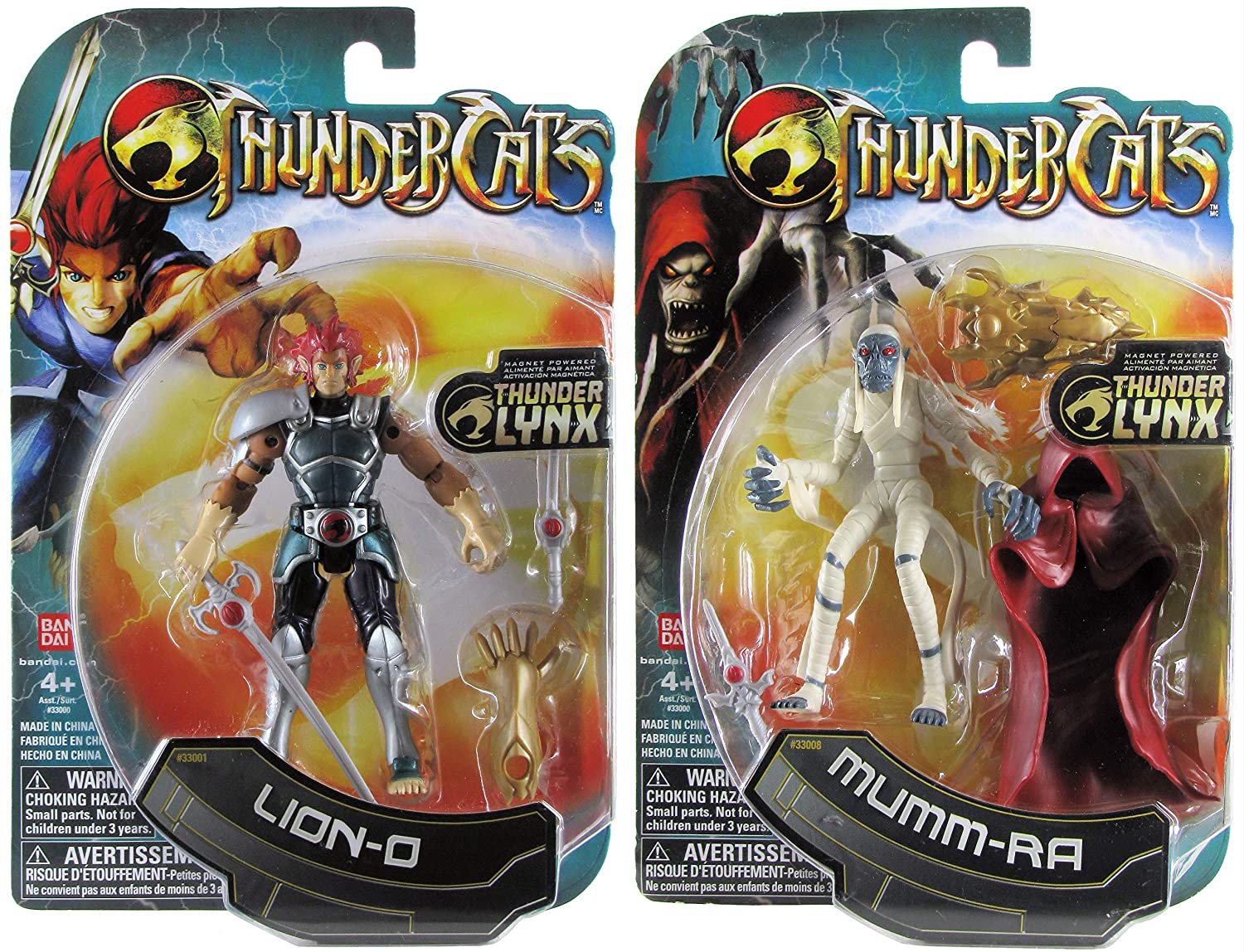 In 2011, Warner Bros animation launched an all new re-imagined Thundercats series and Bandai America released a new line of action figures to coincide with its release.

There was also a very cool feature “ThunderLynx” available in 4-inch scale figures. This feature was a magnet that was fixed in all action figures and vehicles, this magnet-activated different features like light-ups and sounds. A few of the figures from the 4-inch scale line were also produced in the 6-inch scale line, with more articulation points and more detail sculpting.

The Classic line was designed to give fans action figures based on the original 1985 series and LJN line of figures.

In 2012, Bandai regrettably closed production of this action figure toy line and although no official announcement was made no new figures were at the New York Toy Fair and many online retailers labeled them as Discontinued. 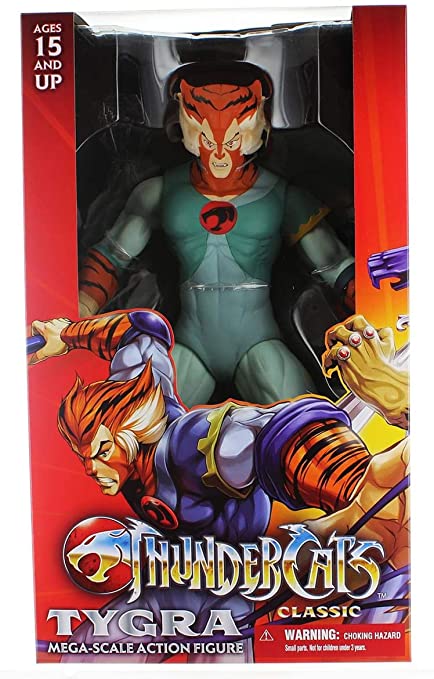 As well as the Bandai line Mezco Toyz also released a line of 14-inch Mega Thundercats action figures based on the original 1985 animated series.

Mezco only released eight action figures in this line, each had multiple points of articulation on the shoulders, waist, head, and knees.

All figures also came with accessories and weapons. Additionally, in 2016 Mezo released a soft Thundercats toy “Plush Snarf”, which was available at the SDCC. 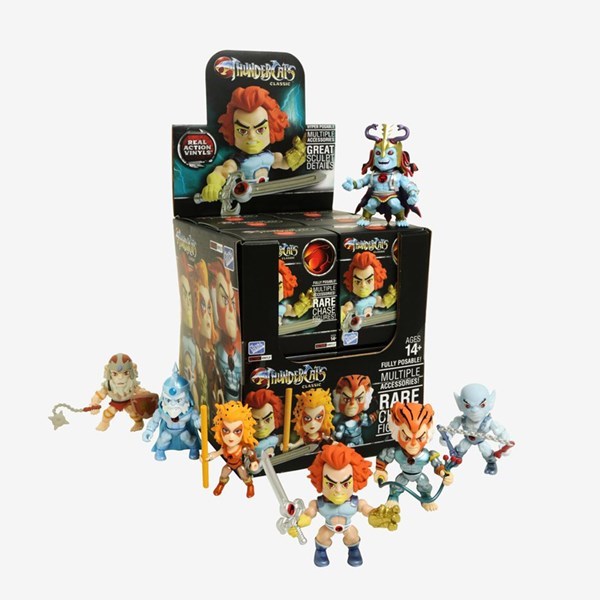 These figures were sold as "blind boxes" at retail but many retailers opened the boxes and sold the figures on the secondary market. The figures had many articulation points.

Each figure also had a collector’s card included in the packaging. The line included 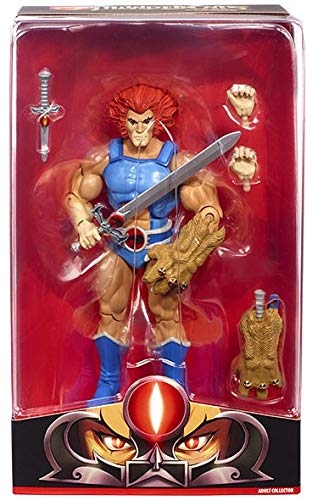 In 2015, Mattel announced a line of 6-inch figures that were not available at retail outlets, but only through Mattel’s website on a subscription basis branded as “Club Third Earth”.

These figures were based on the original cartoon series and were 6-inches in height with multiple points of articulation and each figure came with a variety of accessories.

However, only six figures (seven if you count Wilykat and Wilykit as two, although sold in a single pack). 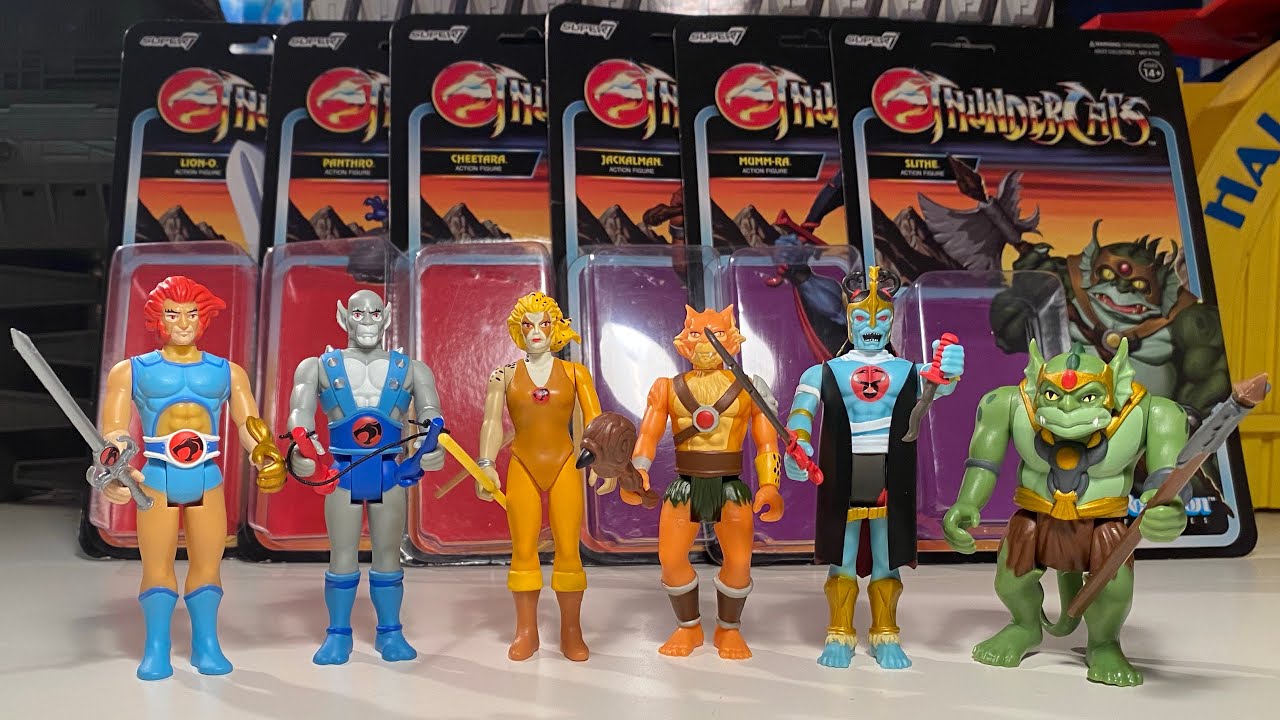 In 2020, Super 7 produced and released a line of Ultimate Thundercats action figures that was a continuation of the earlier 2016 Mattel line of Thundercats figures.. These action figures were on the seven-inch scale with multiple articulation points. This line had many interchangeable accessories and parts and the sculpting and painting were also very good. 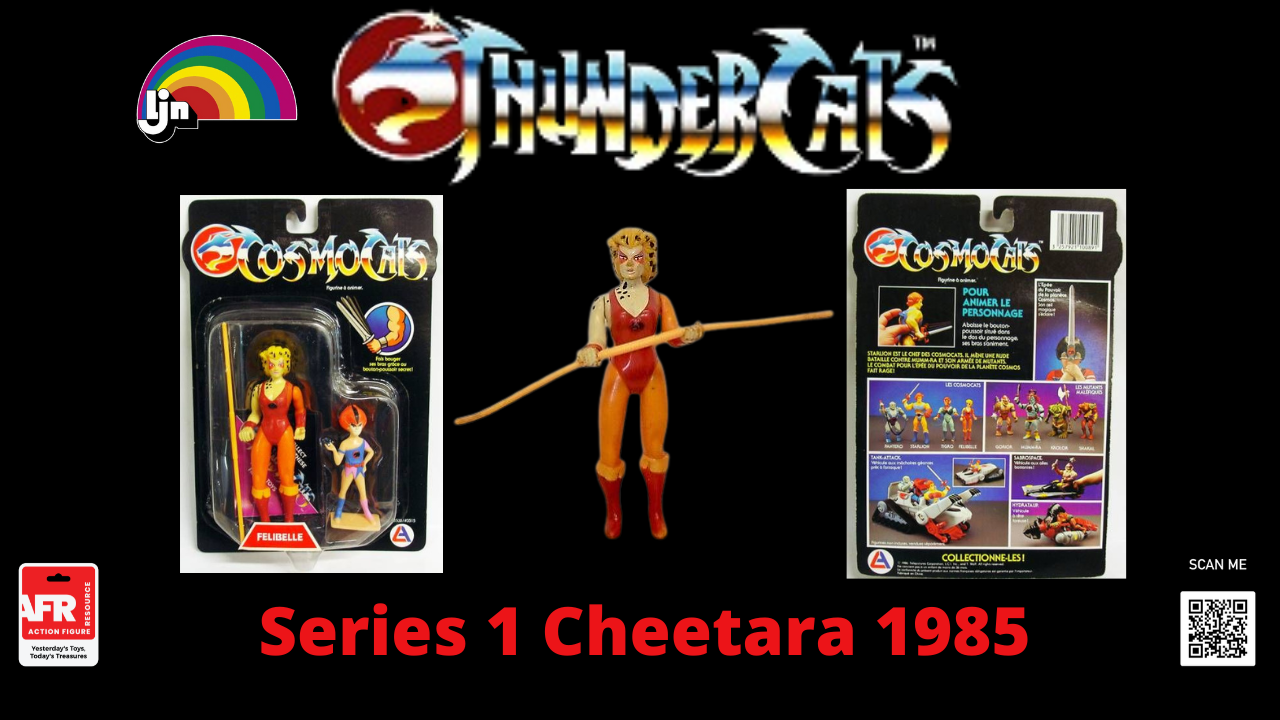