After the success of the first series Toy Biz Iron Man followed the same formula as Series One with series Two. There were 3 Iron Man amour variants, three villains and one unarmored ally. Initially the villains and Hawkeye were scarce, probably due to scalpers. Also, because the non-armored characters did not sell so well in the first series there were less per case and because of this it was the Iron Man figures that became peg warmers in this series.

• Hawkeye with “Bow and Arrow Arsenal” 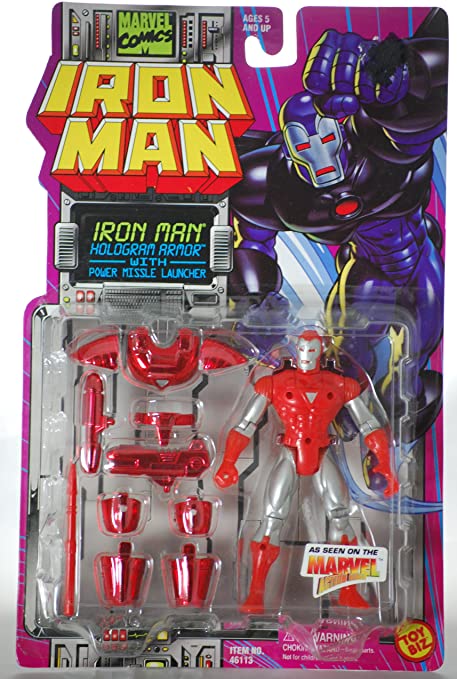 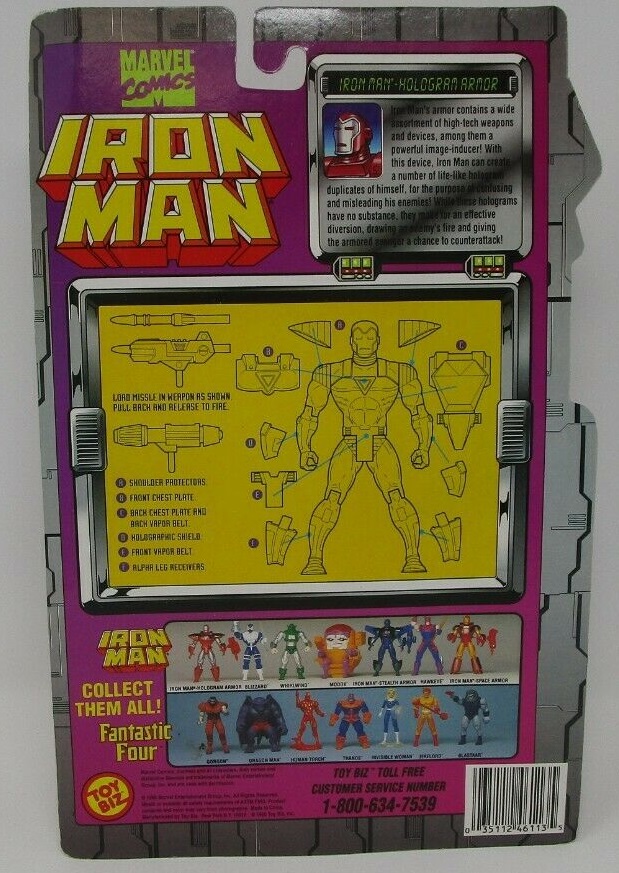 This armour was first seen in the Secret Wars II limited comic series but was first officially introduced in the 200th issue of the Iron Man series that featured the return of Tony Stark after his friend Jim Rhodes filled in for him.

During this period Tony Stark fell into alcoholism after losing his company to Obadiah Stone. This suite was not featured for long in the comics but was popular among fans and was eagerly snapped up upon its release. This was an excellent reproduction and was very accurate except for his helmet. This figure came with a striking red and silver colour scheme and a “Power Missile Launcher”. 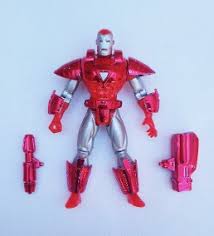 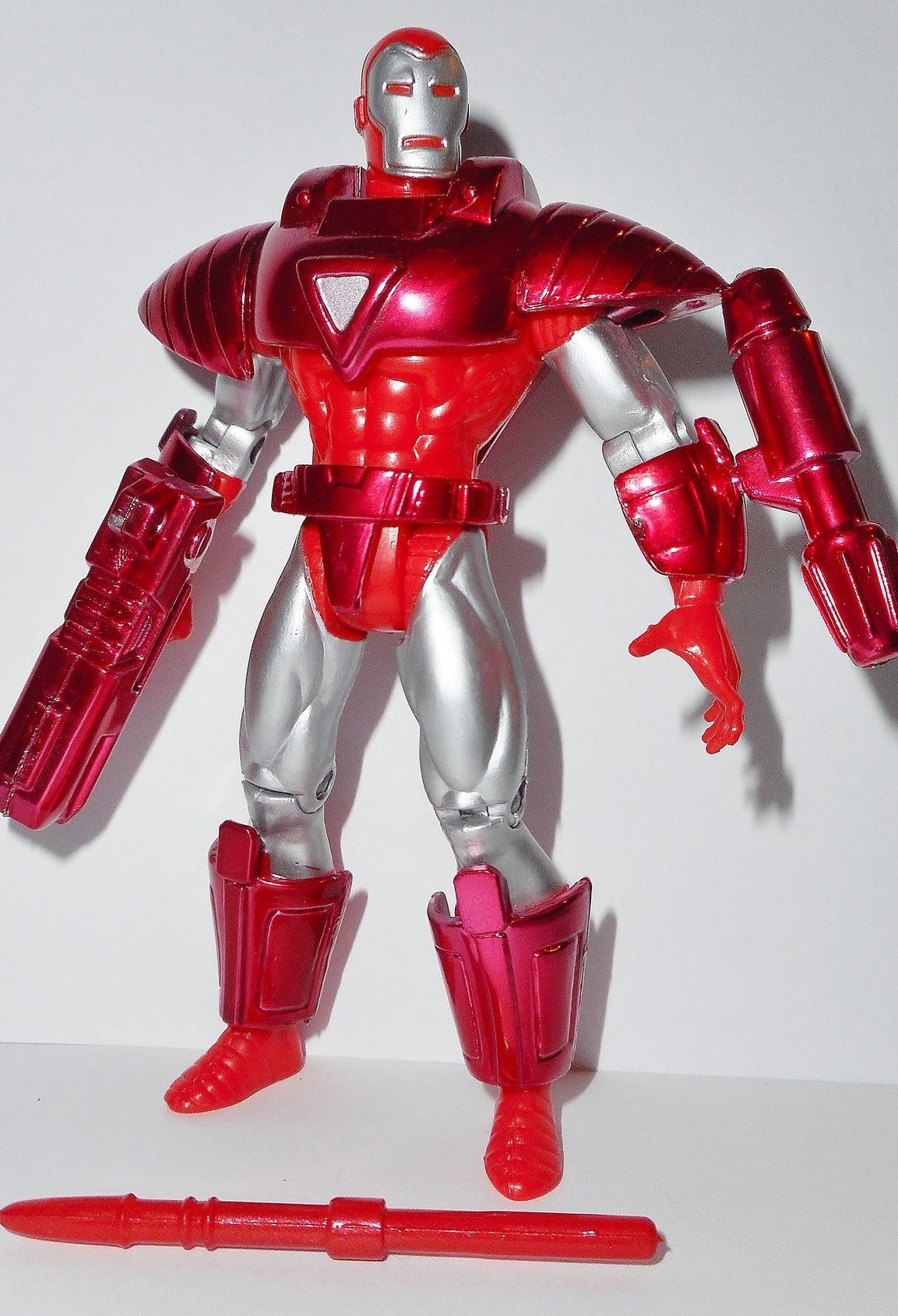 As with many of these Toy Biz Iron Man  figures the armour was challenging to put on but once on, he looked great. He had articulation in his legs, knees, arms, and head. His “Power Missile Launcher” had a spring-loaded mechanism to fire the missiles he came with; however, this often did not work or did not last long. 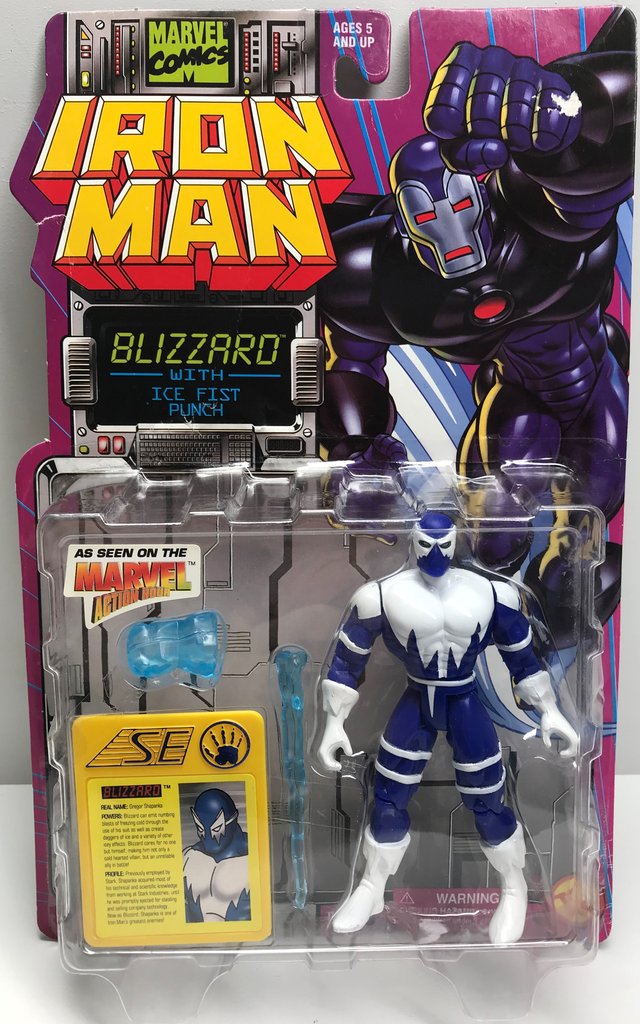 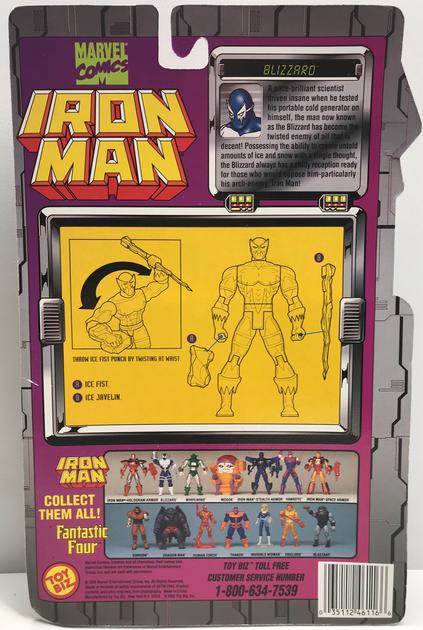 Fired from stealing from Tony Stark but spared from prosecution and jail time in reverence to his years of service for Stark Enterprises Gregor Shapanka was a dangerous, greedy, and ambitious scientist, jealous of Stark’s fortune and power. 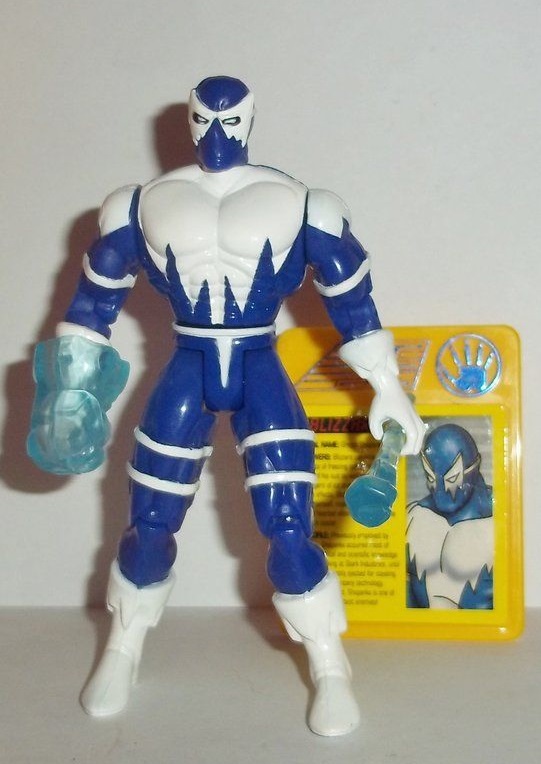 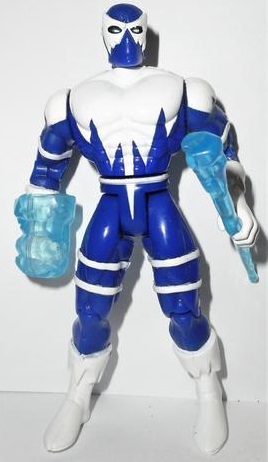 He comes in a very artic looking blue and white colour scheme with articulation on the waist, legs, knees, arms, and elbows. He comes with an “ice fist gauntlet” that clips onto his right hand and when his waist is twisted, he makes a rather feeble “Ice Fist Punch” action.  He also comes with an ice-javelin to hold in his left hand. Strangely enough, he also seemed to have TWO LEFT FEET!

David Cannon was a mutant who could spin at high speeds which he used over the years as a school bully, petty thief, pro wrestler, circus performer and ice-skater. Later, he decided to show his contempt for the police and authority by becoming the flamboyant costumed thief the Human Top, and later the Whirlwind.

His jointed arms were very loosely jointed at the shoulders, but this was so that when he was wound up for his spinning action his arms would flail out to strike his opponents. 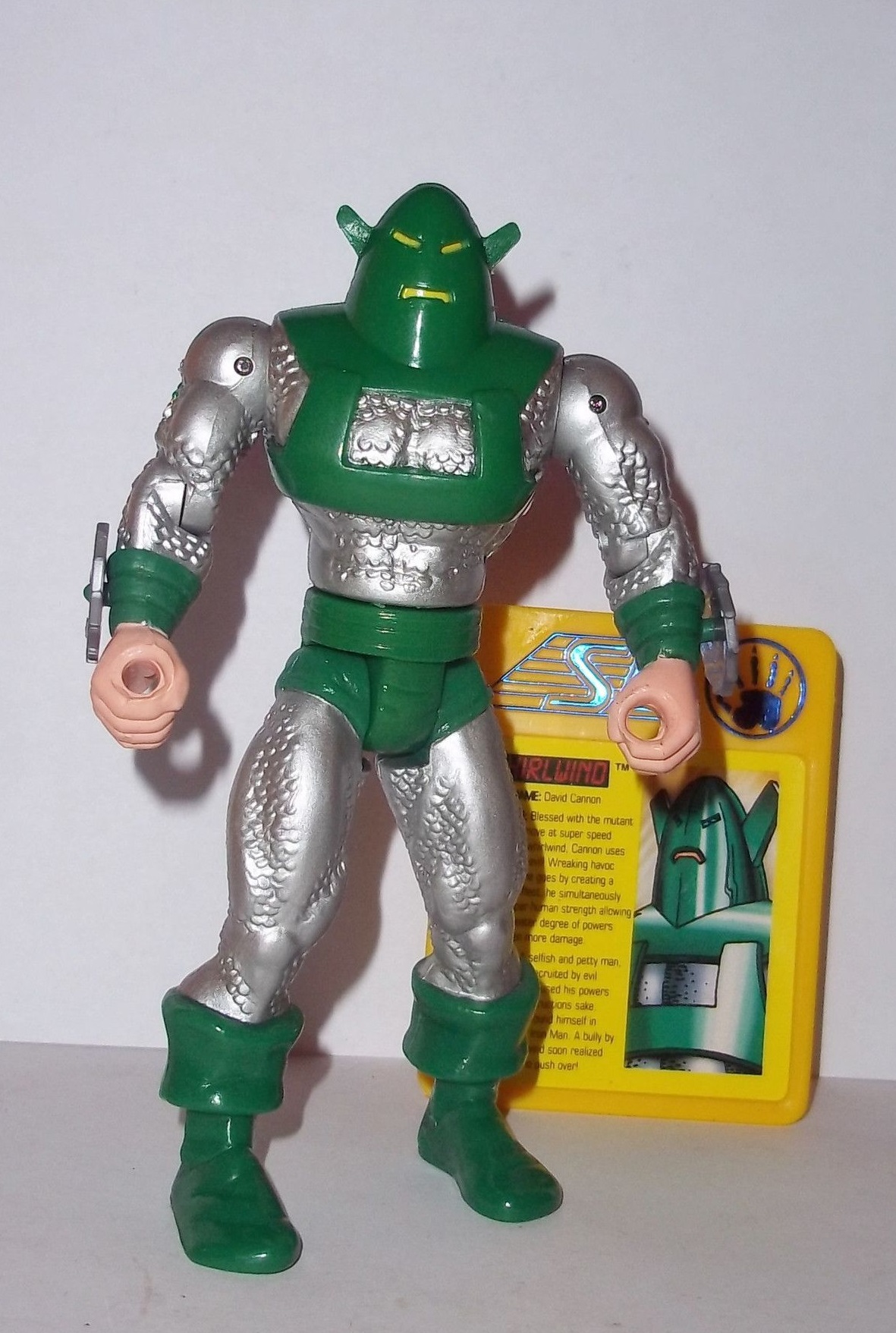 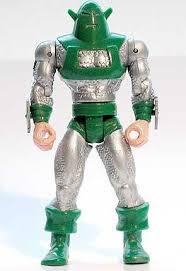 This mechanism also made it difficult for him to look straight.  His action figure worked by twisting his wait to wind him up, and when you let go his torso would spin and his arms would flail. Although a good feature, as with many of these figures the feature often broke after a few tries.

He has articulation in his arms, elbows, legs, and knees but there was no head articulation. He has a green and silver paint scheme. He came with two circular saw blades that clipped onto his arms.

Modok (Mental Organism Designed Only for Killing) was originally an ordinary member of the AIM network who was chosen by the Scientist Supreme to be the subject of an experiment that turned him into Modok. He has an enormous head and a very stunted body giving him a very unusual look. He also possessed superhuman strength and psionic abilities. However, the Scientist Supreme’s experiment backfired and Modok killed him and took control of AIM for his own evil means. 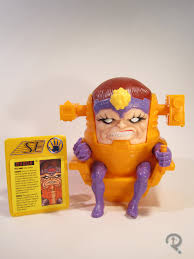 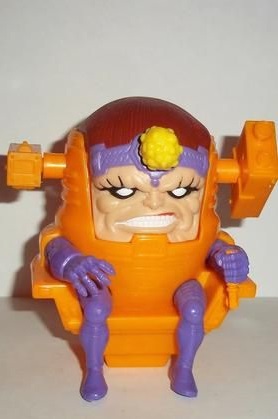 Modok's head is very ‘spongy’ and mean looking with a fierce grimace. He is made from yellow and purple plastic with extraordinarily little paintwork and he has a hole in the middle of his forehead which can be used to fire a projectile from. Mordok comes with a couple of guns that clip onto the side of his chair which can rotate 360 degrees, but Modok himself has no articulation, but this is because Modok himself cannot move and relies on his “exoskeleton” chair for transportation etc.

This armoured stealth suite makes Iron Man virtually invisible and he uses it on covert missions. The sleek blue and black suit is a metal mesh armour that uses every inch of space for anti-detection and evasion technology and because of this was designed without weapons which would hamper its purpose.

This was one of the best Iron Man designs in this line and one of the most interactive of them all. His suit had a compartment on his back that contained a cable system that worked like a zip line allowing him to pull himself up buildings or cliffs etc. This is one of the most popular figures from this line and it was never re-issued or re-painted. 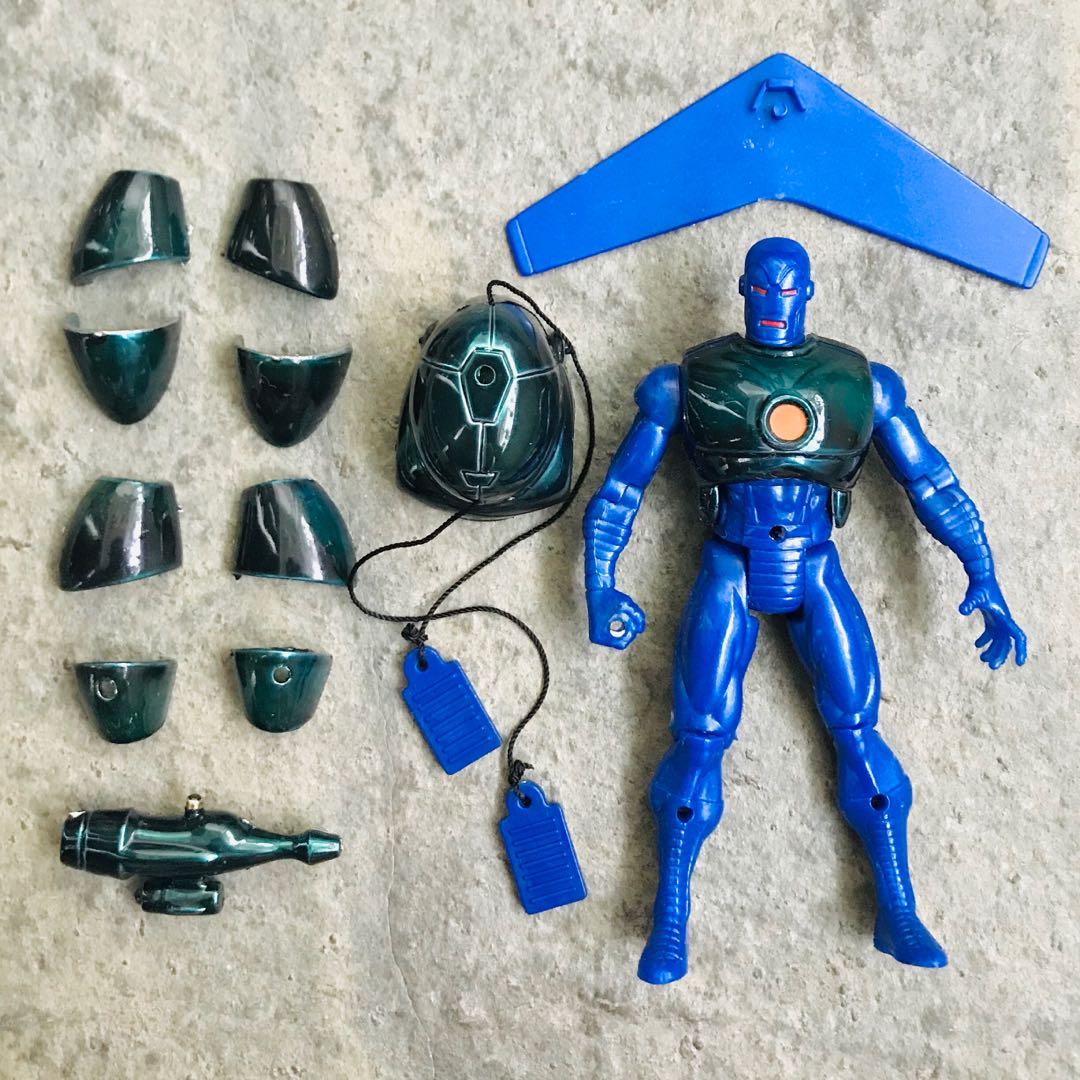 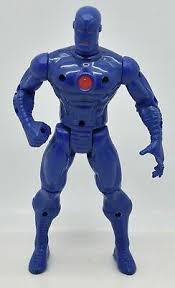 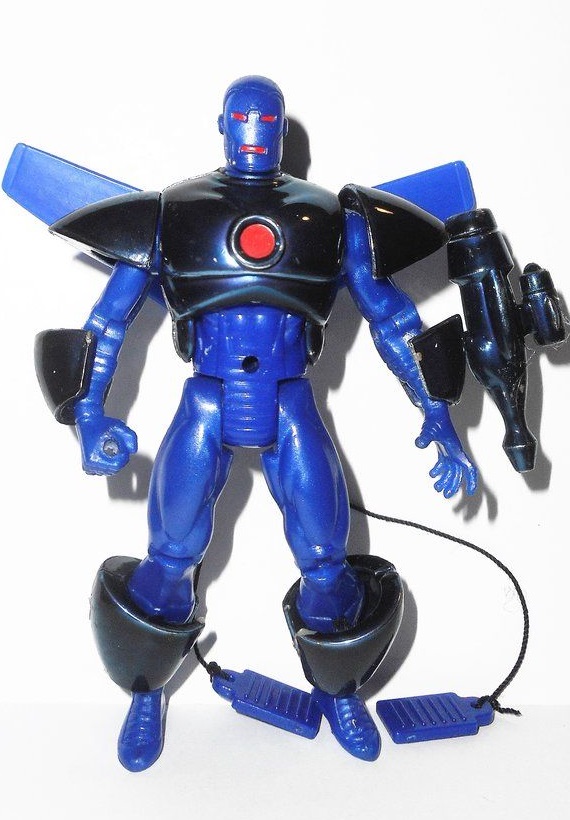 The base figure is a plain blue plastic sculpt he has articulation on the elbows, head, legs, knees, and arms. He also comes with ‘Stealth Wings’ that clip onto his back and act like a hand glider allowing him to ‘fly’. Once his armour has been attached, he looks cool, that said the armour can be difficult to get on sometimes it may even need ‘filing’ down to fit!

After witnessing his mentor stealing money, and refusing to be a part of it, Clint Barton, an archery performer in a sideshow carnival, almost dies at the hands of the Swordsman. He then becomes involved with Black Widow helping her out until Iron Man helps him find his true self and he joins the Avengers as Hawkeye. 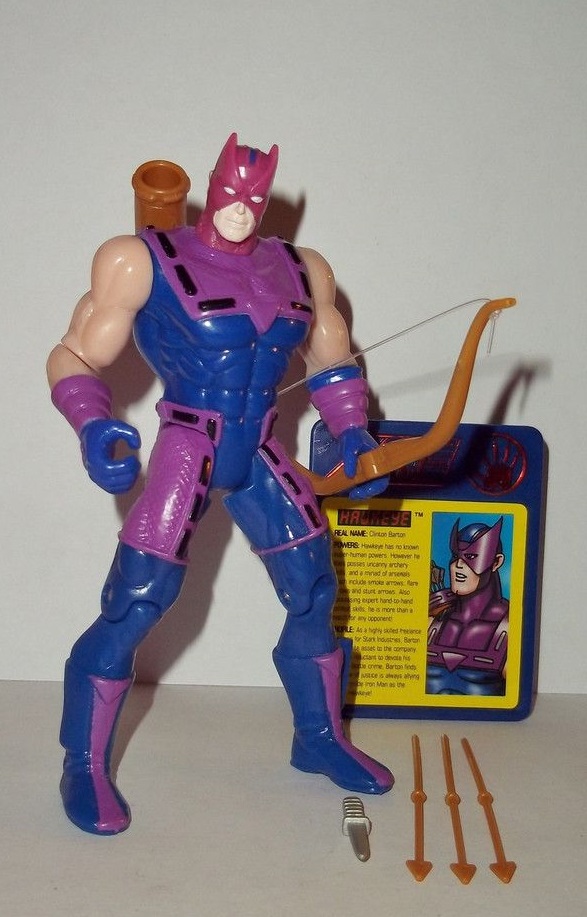 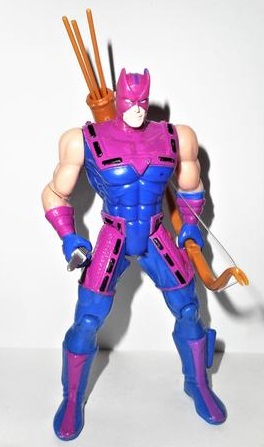 This figure is nicely sculpted and features his outfit from the West Coast Avengers series.  He has a dagger, bow, arrows, and arrow pouch. He has articulation on the shoulders, legs, knees, and head. All-in-all this is a nice looking well sculpted figure.

Few people realize that Iron Man’s standard suit was space worthy but it was unable to withstand extended time in space so he created the Space Armour suit allowed him to spend up to two days in space and was used when Iron Man faced Sunturion and the Star Well. This armour was loosely based on the suit designed by John Romita Jnr. The suit also included a back-pack with a returnable hook on a string.

He had standard articulation on his arms, elbows, knees, legs, and head. 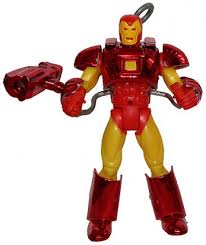 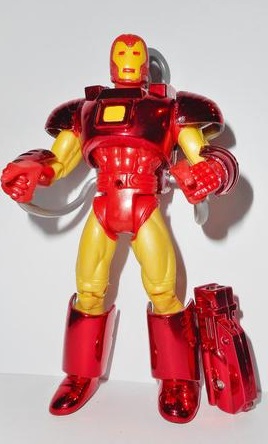 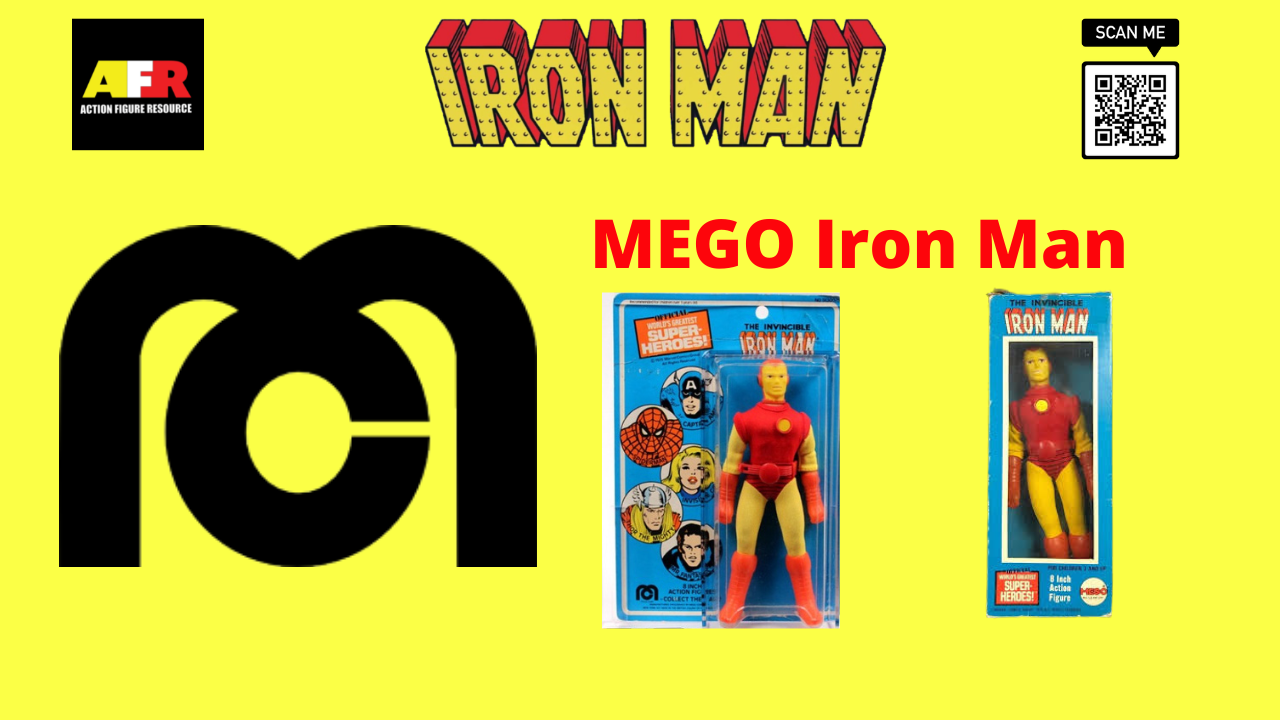