Are the Toy Biz Spiderman Action Figures Worth Collecting

Toy Biz produced and manufactured Spiderman Action figures between 1994 and 2007.

During this period they released six different lines of Spiderman figures with literally hundreds of variations. Most of these figures were generally massively over produced with poor sculpting and paintwork.

However, that said they were great fun to play with and were immensely popular with kids and most of them remain cheap and easy to find even now, 20 or more years after their first release and sell for less than $10, although there are a few that may go up to nearer $20.

About the only really collectible figure of any real value is the original Rhino figure from the third series, which was short-packed. In fact when word got out it sparked off what became known as the great Rhino hunt of 1995 causing prices on the secondary market to soar as collectors feverishly hunted them out.

However, over time the market settled down as more became available and demand began to dip as more collectors managed to acquire him. His price has now leveled off to around the $40-50 mark, so he still remains probably the most collectible of the Toy Biz Spiderman figures.

The first line of figures released by Toy Biz was the Spiderman Animated Series line which ran from 1994-98. The first seven series came under the general “Spiderman Animated” titled but from mid 1996, i.e. after series 7, they decided to give each release a sub-heading. This was mainly to assist retailers differentiate from each series, as there were a total of 18 by 1998, when ordering, re-stocking and stocktaking etc.

The next line of figures to be released was the Spiderman Movie action figures which were launched in 2001. These figures proved to be popular with both fans and collectors, probably partly due to the lack of product over the previous two years. This series included a few 12-inch Collectors Edition figures as well as the regular 7-inch scale figures. 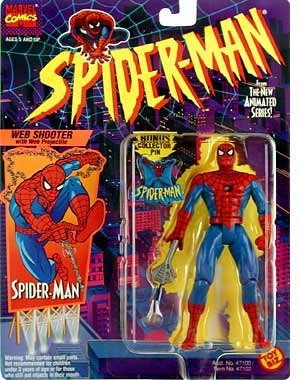 Another series of movie based figures in a similar format to the 2001 ones was released in 2004 to tie in with the Spiderman 2 movie. The highlight of these series was a mammoth, no HUGE Spiderman figure that stood 18-inches in height and had no less than 67, yes 67, points of articulation!

This would make even the Marshmallow Man look small!

Unlike the original movie, that only had one sries of figures, the Spiderman 2 movie had 4 sperate series’ of figures and two 12-inch figures as well as the colossal Spiderman figure.

In 2001 a new line of Spiderman Classics was released which, although in many places being listed as only one series, in fact consisted of two series.

The original series featured Legends style clamshell packaging and each figure came with a reprinted comic that was significant to the accompanying figure.The second series however was packaged with basic backingcard and there were no reprinted comics issued with the figures.

Also these figures seemed to have been more aimed at children as they had extra articulation, action features and many of the Spiderman figures wore costumes that were not featured in any of the comics. 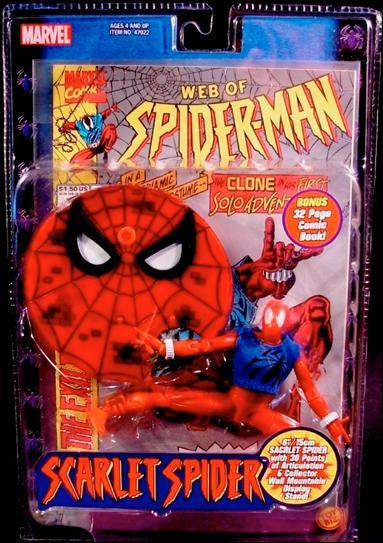 The following year Toy Biz released a generic “Spiderman” line of figures that drew its inspiration from previous releases, the TV series, comics and the movie. This was probably the most popular of all the Spiderman lines and sold well at retail also whereas many of the previous figures languished on their pegs.

This line ran between 2002-2005 but despite its fairly short life span Toy Biz managed to amass a huge volume of figures with a total of 15 series of figures, which amounts to an average of 5 releases a year. Not to mention that this was on top of the 2 movie lines!

It was about this time that Marvel Entertainment, i.e. Toy Biz, ran into financial troubles and was sold off to industry giants Hasbro. 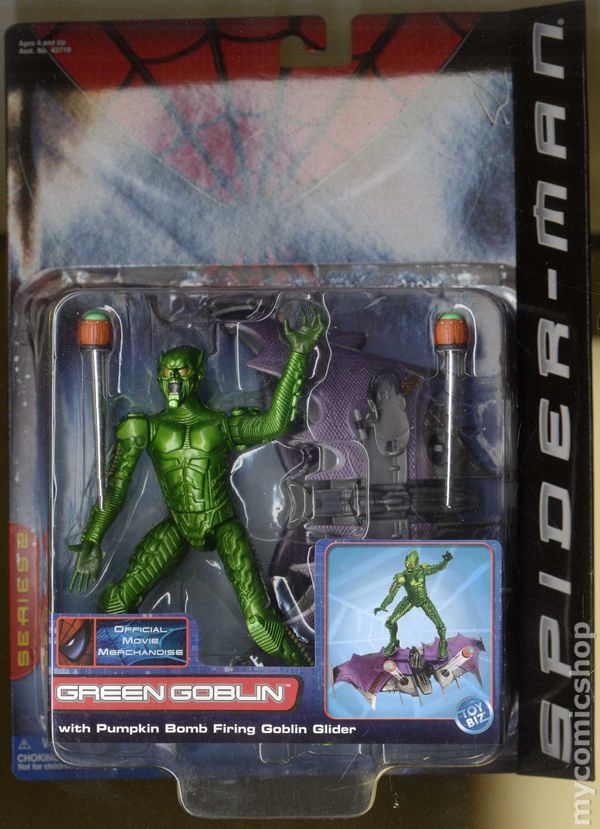