The Transformers figures were originally conceived in 1983 based on Takara’s Diaclone and Micro Change series of transforming robot lines that a Hasbro representatives saw at the Tokyo Toy Show.

However, reluctant to confuse the market with several different series using the same theme Hasbro decided to market them under one brand and so The Transformers were born.

The first wave of Transformers figures introduced the heroic Autobots who made their debut as small, easy-to-convert "mini cars."

The second wave introduced their arch rivals the Decepticons who had slightly more difficult conversions.

The first animated TV series also hit the airwaves at this time and quickly became one of the most popular kids' programs of the year and eventually expanded into a five-day-a-week show.

Kids everywhere re-enacted the action of each episode with their friends at school the next day with the help of their Transformers figures.

Hasbro also approached Marvel Comics to provide a background story and a tie-in comic for the line, after their success with the G.I. Joe line of toys.

The comic was originally slated as a four-issue "mini series," but they became so popular that Marvel continued the series, which eventually grew to 80 issues.

Who Are The Transformers?

The Transformers Universe consists mainly of two distinct factions, the Autobots and Decepticons. Originally the Transformers could only change, or “transform”, into vehicles but later “models” could also change into mechanical devices and even animals.

These two factions had been at war with each other for thousands of years on their home planet of Cybertron when, approx 4 million years ago, a group of robots from each faction crashed landed on a prehistoric earth.

The two main characters, and the leaders of the opposing armies, were Optimus Prime of the Autobots and Megatron of the Decepticons.

Although they haven’t been featured in the line constantly, as they were replaced by other leaders periodically during the line’s history, they have continued to appear in one form or another in subsequent Transformers series.

What Are The Transformers Figures Classes

The Transformers figures class structure was first introduced in the Beast Wars series of figures.

Up till then there had been no real uniformity with each series of figures which often resulted in an assortment consisting of no more than four or six different toys and separate Autobot and Decepticon assortments.

The idea behind the size classes is fairly simple as the Size class is used to determine the size and price of a figure. This system has several advantages for the retailer, consumer and Hasbro as it introduced a uniform size, price and packaging for each type of figure (or class), as well as the amount of budget spent on the production of a Transformers toy action figure, such as paint or electronics.

For the consumer, especially with the increasing popularity of the internet, it means they can order a figure in confidence knowing exactly what they will receive, as well as knowing whether a dealer is charging more than the recommended retail price.

A Transformers figures class size relates to its design and production process as well allowing Hasbro to keep a close tab on production costs for any particular figure. As a result Hasbro have tight formulas for how much plastic can be used, how many paint applications are allowed, whether electronics can be included, and how complex the transformation and articulation can be.

However the size classes have not been consistent from line to line, with names often changing to affect marketability.

What Are The Top 5 Transformers Figures?

The Original figure was capable of transforming from a robot to a cab over semi truck.

2) Megatron – Optimus Prime’s arch rival and nemesis and leader of the decepticons Megatron is a popular as ever, the Darth Vader of the Transformers universe.

Megatron transforms into an arm-mounted cannon and the original toy could be used to fire small plastic pellets but this feature was taken out for the international market.

Also at one stage sales of Megatron were banned due to the risk of his being mistaken for a real weapon by customs etc.

3 ) Devastator – This was the first ever of the “combiner” transformers. These Transformer figures were a combination of 6 Constructicon robots that made up one piece.

A non graded Devastator recently sold for $1528 on auction.

4) Rodimus Prime – He an advanced and re-formatted version of the Autobot Hot Rod and became the Autobots leader following in the shadow of Optimus Prime.

He was also the most expensive G1 transformer toy to ever hit the market with a retail price was of $89.99 when the toy first came out. 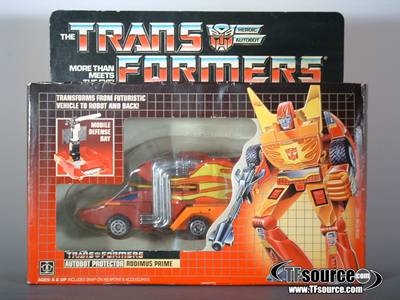 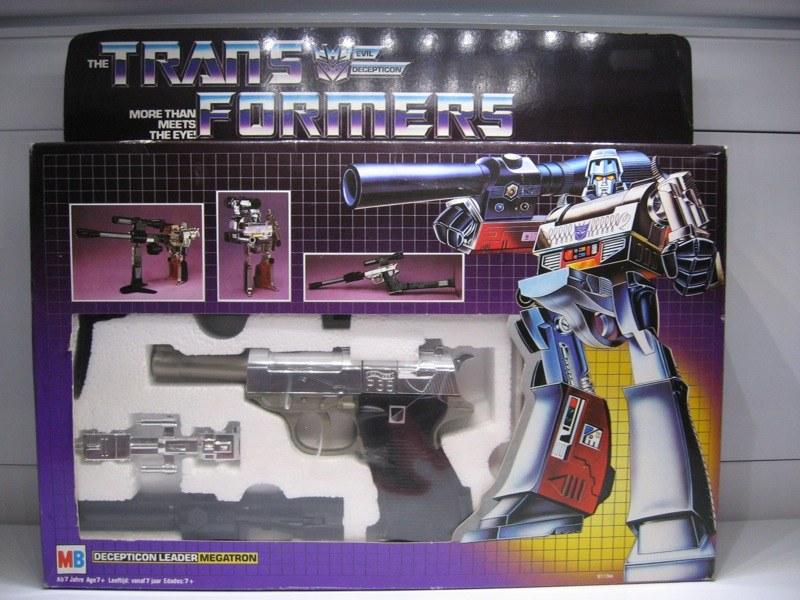 You will often hear the term redeco used when talking about the different Transformers figure, but what is a redeco?

RedecoS  are Transformers figures  that use the same molds as a previous figure but with different coloured plastic or metal or as a different character.

However, if the figure is different in any other way, i.e. with a different head or accessories etc, then it becomes a retooled figure not a redeco.

Redecos are often also called repaints, however this is also incorrect as more than the paint application is changed on a redeco, also this is the term used by the Hasbro technicians and designers.