The Mego Wizard of oz Action Figures  were released in 1974, based on the 1939 movie of the famous 1900 nove,l The Wonderful Wizard of Oz, by L. Frank Baum and starring Judy Garland as Dorothy Gale.

In fact it wasn’t until its theatrical release in 1949 that it became profitable, then in 1956 CBS broadcast it on TV for the first time and after its popularity it became an annual tradition making it the the most-viewed motion picture on television!

Despite this there have been very few action figures based on the movie, the most famous and well known of these probably being the Mego figures, although they are by no means the only ones. Personally I love the Twisted Land of Oz figures created by McFarlane!

The first series of figures was released in two different styles of boxes, a plain green box and a “yellow brick road” box.

There were 13 Mego Wizard of Oz Action Figures in total released , including the Munchkins, and four play-sets. The rarest, and last, of the figures to be released were the Wizard and the Winged Monkey which have been known to sell for upwards of $300 or more on the secondary market.

Dorothy:  when buying a loose figure check that she has her panties on as these are often removed by collectors to use on the Isis figure. Dorothy came packaged with her dog, Toto, and a basket.

Lion: the Lion is the easiest of the Oz figures to find and also because of his lack of clothing and accessories is usually complete. The Lion came with an oversized Medal of Courage attached around his neck by a blue ribbon. The main problems with this figure are paint loss and chipping and also the medal is prone to flaking and fading.

Tin Man (Woodsman):  available on both the type 1 and type 2 Mego bodies. One of the major problems with this figure is his axe which is often cracked and/or broken.

Scarecrow: the Scarecrow came on both the type 1 and type 2 Mego bodies and there were also a hairless and with hair variant heads. The first head, and by far the rarest, had strands of straw molded onto the figures head but this was latter replace by rooted yellow hair to better represent escaping strands of straw. Also be careful of his shoes as they fit very loosely and are easily lost.

Glinda:the Glinda figure came with two styles of pelvis pieces. The firstwas a pinkish flesh colored version, whereas the second, and by far the rarest, was made in white plastic, probably to resemble pants or knickers. As with the Lion’s medal Glinda’s crown is also prone to fading and flaking so needs handling (if you must) with extreme caution.

Wicked Witch: this figure came with a 2-piece broom and there are no known variants. This is the hardest of the Oz figures to find loose in a mint condition but it is by no means the most expensive. 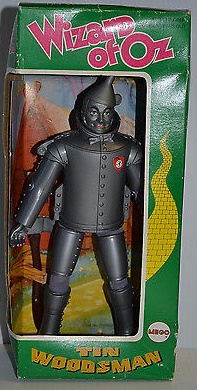 All the above Mego Wizard of Oz Action Figures were packaged in both the plain green and yellow brick road boxes and also released poly-bagged with a header card as a clearance item, which is a rare variation.

Wizard: this was the only one of the Mego Wizard of oz Action Figures  that was only produced in the yellow brick road packaging as it was a later addition to the set, however he was produced on both a Type 1 "fat" body and a Type 2 long-torso "fat" body. As with the Scarecrow be careful with his shoes as they are a very loose fit. Also despite this figure being the most common to find loose it is by far the rarest to find MIB, which I suppose is quite logical if most of them were opened up, bearing in mind these were released well before collecting figures became popular and mainstream.

Mayor: Out of the Munchkins this is the more common figure mainly due to its presence in the Munchkinland set.

Dancing Girl: this figure was unique as it was made up of rubber flesh arms (bent at the elbows and legs (reinforced with internal wire) with ballet slippers painted in pink on the feet, rather than real shoes and a hard plastic torso cast in pink.

The Munchkins were made from a cheaper grade of plastic and as a result the heads are often prone to a graying of the face. 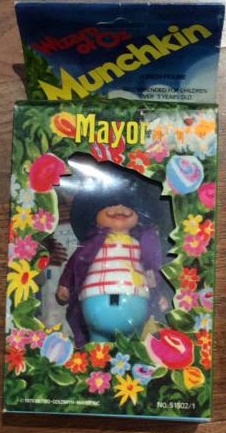 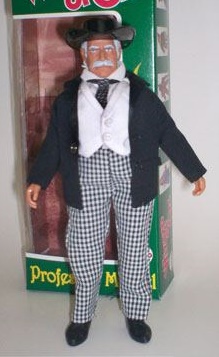 Emerald City: this was the first Mego Wizard of Oz Action Figures play-set to be produced but was fairly generic and was mainly made of cardboard covered in clear washable vinyl. There was also a Wizard’s control room with a pullback curtain, a fold-up yellow brick road, a spinning crystal ball, a throne chair, an apple tree and a rotating disc featuring the Wizard’s avatars. The set also came with the Wizard figure.

Emerald City Gift Set: The Emarald City gift set was exactly the same as the Emerald City except that it also came with all SEVEN of the first series of figures and is the rarest of all the Wizard of Oz items Mego produced.

Witches Castle with OZ07 (Sears): this was a Sears catalog exclusive and consisted of a clear vinyl covered cardboard castle with one large turret and two smaller turrets, each big enough to house a figure. The larger turret also had a draw gate, which could be raised and lowered;  a staff with a skulls head; a broomstick; and a witch’s cauldron. The play set also came with the Witch figure. Interestingly the castle was originally designed for the Super Knights line!

Munchkin Land with OZ09: this was the most accurate and movie like of all the playsets. There are to sides to the playset, on one side the inside of Dorothy’s house and the other side the Munchkin’s houses, including the balcony. There is also a plastic bed and a cyclone transporter which is actually the Star Trek Enterprise transporter to spin Dorothy from her house to the Manikin’s homes. This playset came with the Munchkin Mayor and despite being under produced and fairly rare is relatively inexpensive as it isn’t as popular as the others. 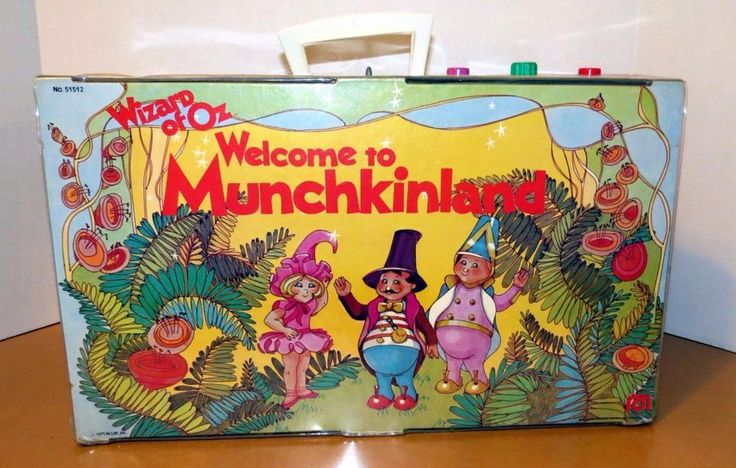 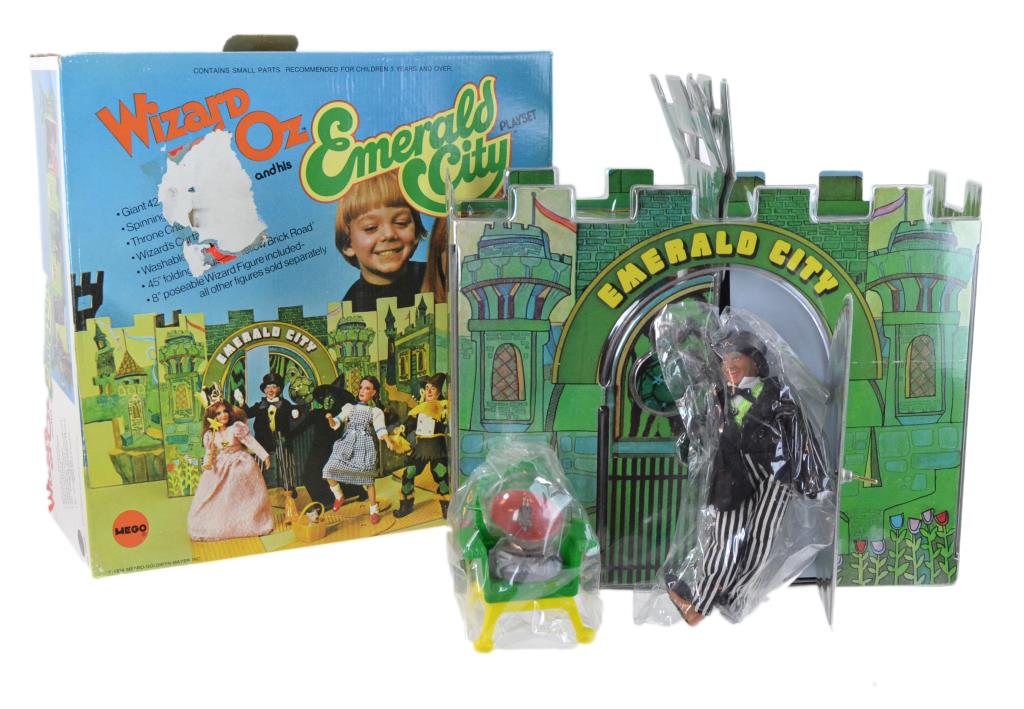 Mego Wizard of Oz Action Figures softies/dolls resembled the Super Hero softies except that their heads were made of plastic with cloth bodies. 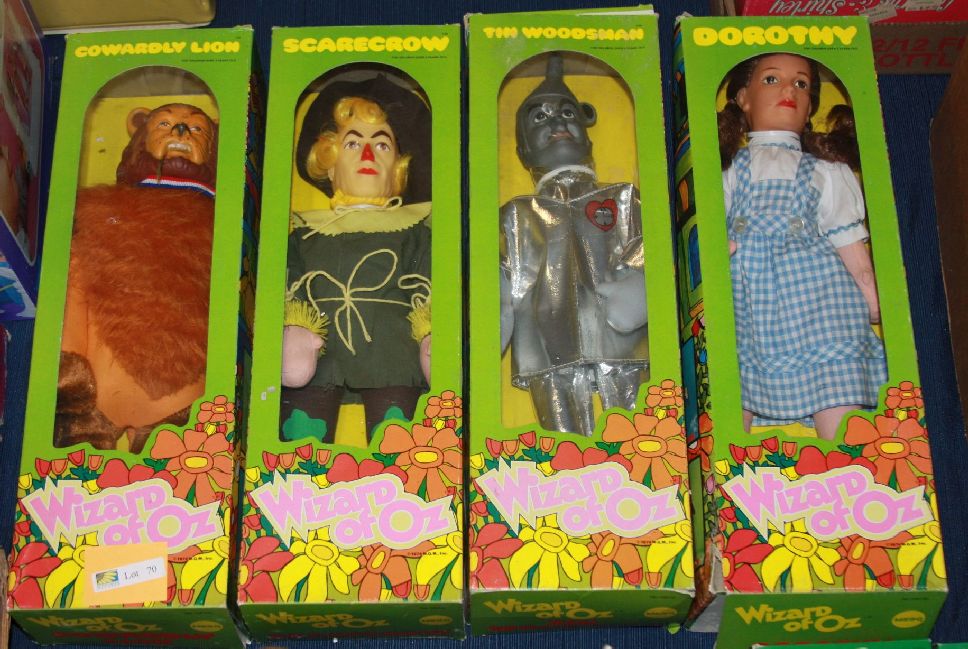 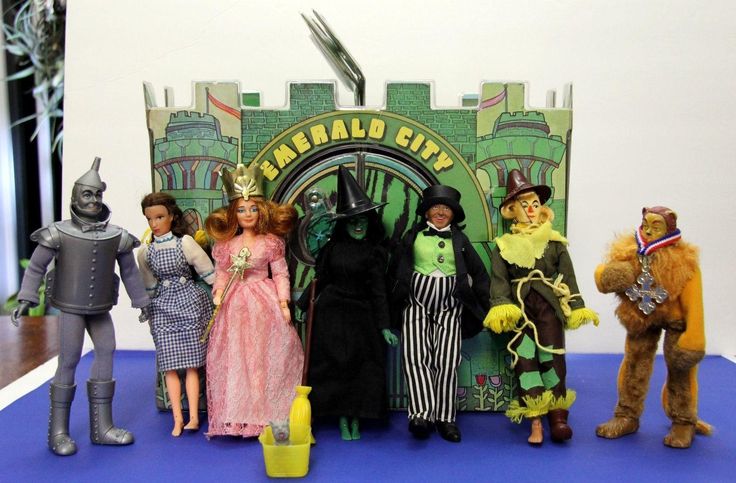 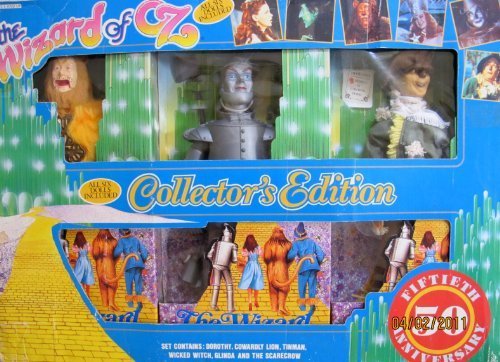 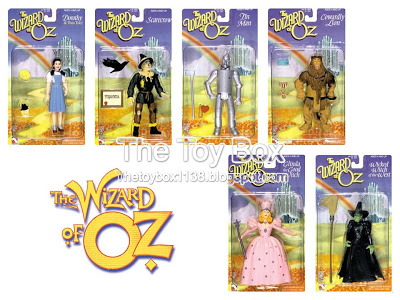